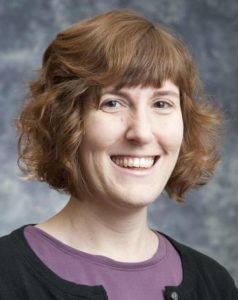 Colleen McFarland is director of archives and records management for Mennonite Church USA.

April 2015 marks the centennial of the Armenian Genocide (1915-1923). Armenians, a Middle Eastern people who embraced Christianity in the early fourth century, suffered persecution and pogroms under Ottoman rule in the late nineteenth century. After the outbreak of World War I, Armenian volunteers joined a violent Russian military campaign against the Ottoman Empire that resulted in massacres of Turks. In retaliation, Ottoman authorities unleashed a brutal policy of expropriation and deportation against the Armenians. The greatest losses of life occurred by starvation on death marches and in concentration camps. Estimates of Armenian lives lost during the genocide range from 600,000 to 1.5 million.

Mennonites joined in international relief efforts under Near East Relief to assist refugees of the Armenian Genocide from 1919 to 1923. Sources in the Mennonite Church USA Archives indicate that 31 (old) Mennonite men and women contributed their time and talents to Near East Relief, leading orphanages and refugee camps, driving and repairing trucks for the transport of people and goods, and serving in administrative positions. Among them was a young Orie Miller of Akron, Pennsylvania, who went on to found Mennonite Central Committee. 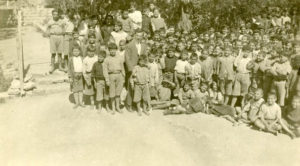 The archives holds several collections documenting Mennonite work among the Armenians. My favorite is the Cleo A. and Nellie Miller Mann Papers (HM1-695). At age 24, Nellie Miller postponed her wedding to accept a secretarial position under Ray Bender, treasurer of Near East Relief. Her personal papers contain striking photographs and vivid descriptions of her life and work as a volunteer. Although she worked in an office in Beirut much of the time, Nellie journeyed to orphanages and refugee camps and expressed a special affection for the orphans. Describing a visit to the Antilyas orphanage, she wrote to her fiancé: 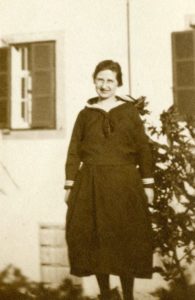 Nellie on a Windy Day in the Garden.Nellie Miller Mann Photographs, 1922-1924.

“I am not a slacker, dear, but I doubt whether you could find a group in America of 1500 or 2000 boys as we have in Jebail and Antilyas who are any more manly, courteous, enterprising and intelligent that these boys are, and who have higher ideals than the ones towards which these boys are striving.” (Nellie Miller to Cleo Mann, September 15, 1922)
About a year later, Nellie related an incident in which an elderly, wealthy tourist mistook her for a Near East orphan, complimenting her on her “beautiful English.” Not wanting to disappoint the tourist, Nellie “passed on, as an orphan.” No doubt, Nellie recognized the vast gulf between her experiences and those of the Armenian orphans. And yet, her writing and photographs testify to her witness as a friend who stood in solidarity with and provided aid to the young survivors of a far-away atrocity. Perhaps the elderly tourist was more insightful than confused, for the tourist saw what Nellie felt in her heart – that American Mennonites and Armenian orphans were not so different after all.