Week 2: The Purpose of Policing in the United States

This week we’re learning about the purpose of policing in the United States. You’ll get a sense of why communities of color are concerned about policing. As you study the story of Paul and Silas’ escape from jail, notice how those who enforce the laws of the state are bound up in and impacted by systems of punishment. As you think about your own experience of policing, you’ll be given a chance to explore the complicated terrain of policing in the United States.

Return to your posture of safety from the previous week. Hold this posture for 60 seconds. During this minute, pay attention to other people’s safety posture.

How does another person’s posture intersect, or is similar to, your posture? What do you see that connects with you or provides new insights into your understanding of safety?

Amber Ruffin, a writer for “Late Night,” describes her encounter with the police.

After playing the video, the facilitator invites 60 seconds of silence.

Facilitator introduces and plays the following “Defund the Police” video.

In this video you’ll be introduced to a brief history of policing and why communities, especially Black communities, are calling for the abolition, or end, of policing as a way to keep people safe. Police abolition is not about reforming the police to be less brutal – it is about the end of police, law enforcement and policing, so that a more just and liberative society and humanity can be built and experienced. [Link]

Answer the following questions together:

On a piece of paper write the word “policing” at the center. Generate a group word cloud to get a fuller sense of what policing entails. A word cloud begins with one word and builds off associated words or ideas.

Here’s an example of a word cloud: 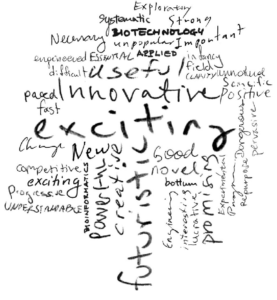 The facilitator invites two people from the group to read the following passage aloud.

As we were going to the place of prayer, we were met by a slave girl who had a spirit of divination and brought her owners much gain by fortune-telling. She followed Paul and us, crying out, “These men are servants of the Most High God, who proclaim to you the way of salvation.” And this she kept doing for many days. Paul, having become greatly annoyed, turned and said to the spirit, “I command you in the name of Jesus Christ to come out of her.” And it came out that very hour.

But when her owners saw that their hope of gain was gone, they seized Paul and Silas and dragged them into the marketplace before the rulers. And when they had brought them to the magistrates, they said, “These men are Jews, and they are disturbing our city. They advocate customs that are not lawful for us as Romans to accept or practice.” The crowd joined in attacking them, and the magistrates tore the garments off them and gave orders to beat them with rods. And when they had inflicted many blows upon them, they threw them into prison, ordering the jailer to keep them safely. Having received this order, he put them into the inner prison and fastened their feet in the stocks.

About midnight Paul and Silas were praying and singing hymns to God, and the prisoners were listening to them, and suddenly there was a great earthquake so that the foundations of the prison were shaken. And immediately all the doors were opened, and everyone’s bonds were unfastened. When the jailer woke and saw that the prison doors were open, he drew his sword and was about to kill himself, supposing that the prisoners had escaped. But Paul cried with a loud voice, “Do not harm yourself, for we are all here.” And the jailer called for lights and rushed in, and trembling with fear he fell down before Paul and Silas. Then he brought them out and said, “Sirs, what must I do to be saved?” And they said, “Believe in the Lord Jesus, and you will be saved, you and your household.” And they spoke the word of the Lord to him and to all who were in his house. And he took them the same hour of the night and washed their wounds; and he was baptized at once, he and all his family. Then he brought them up into his house and set food before them. And he rejoiced along with his entire household that he had believed in God.

But when it was day, the magistrates sent the police, saying, “Let those men go.” And the jailer reported these words to Paul, saying, “The magistrates have sent to let you go. Therefore come out now and go in peace.” But Paul said to them, “They have beaten us publicly, uncondemned, men who are Roman citizens, and have thrown us into prison; and do they now throw us out secretly? No! Let them come themselves and take us out.” The police reported these words to the magistrates, and they were afraid when they heard that they were Roman citizens. So they came and apologized to them. And they took them out and asked them to leave the city. So they went out of the prison and visited Lydia. And when they had seen the brothers, they encouraged them and departed.

Facilitator invites the group to answer the following questions:

As participants continue thinking about multiple perspectives, the facilitator invites them to spend time discussing: How could each of the scenarios below be addressed with the police or without? Imagine if we did not have police. What would you do instead?

The facilitator introduces the following “Community Solutions Instead of Police” resource, sharing your screen on the following link, or sharing copies with the people in your group.

Community Solutions Instead of Police