Week 3: The History of Policing and Police

Policing has a history, a history we don’t often learn about in school. Today, you’ll get a chance to learn more about the history of policing – and how these origins impact policing today. Once you have a sense of the history of policing, you’ll get a chance to think through the work of police today. Finally, you’ll interact with the story of Paul disrupting the social order as you think through the role of policing in history as a way to control and order a particular form of life.

Facilitator invites the group to participate in a guided senses meditation with this video from Transformation Yoga Project (Length 3:26). [Link]

Watch the following story of a teenager’s first encounter with racial bias and violence on this video playlist from PBS NewsHour. [Link]

After each narrative, hold silence for 60 seconds.

Facilitator invites people to watch the video on the origins of policing and then to discuss the following questions.

In this video, you’ll get an overview of the history of policing by Khalil Gibran Muhammad and Chenjerai Kumanyika. They provide insight into the extent of policing and how white people collectively served as a police force in the time of slavery. [Link]

Answer the following questions together:

Facilitator asks the group to make a list of how they think the police spend their time. Each year, what is the primary work police do in communities? Rank the top five calls that the group thinks police respond to every year. 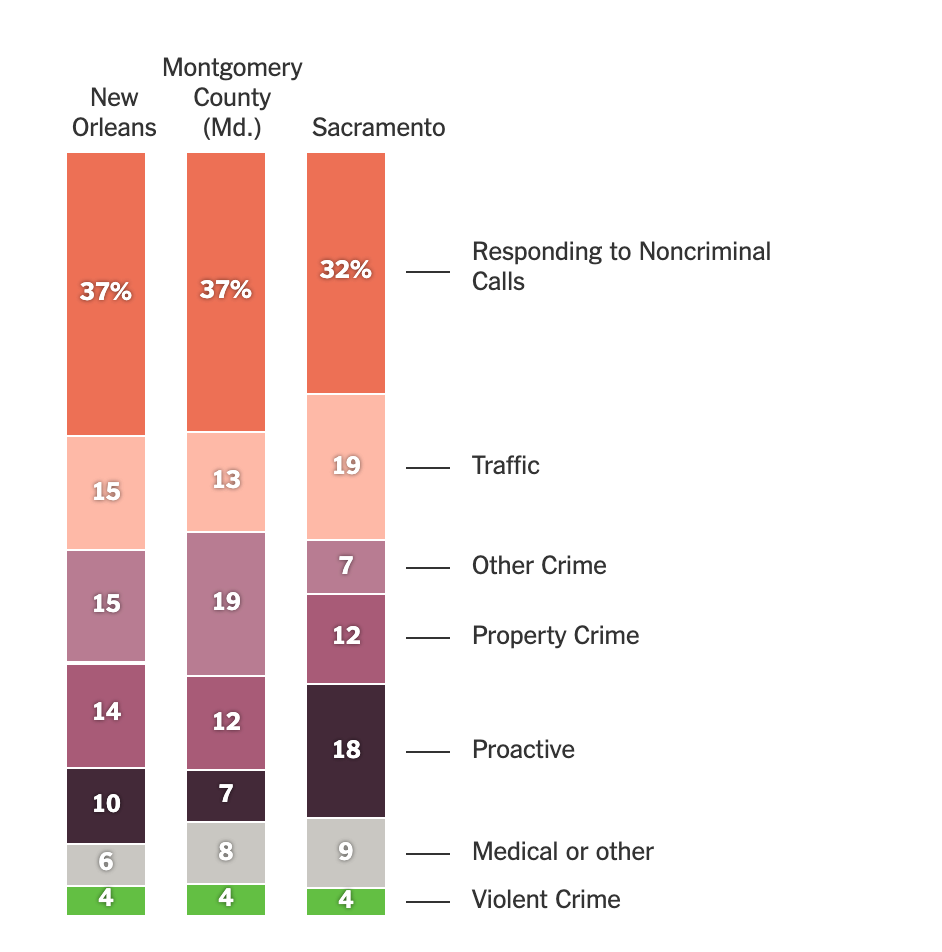 Myth #1 The police spend most of their time investigating or preventing violent crime.

Fact: In most major cities, police respond to calls regarding violent crime as 1% of their work.

Fact: “Numerous studies show that the race of officers has no effect on the quality of policing.”

Myth #3 Implicit-bias training can root out racism in policing.

Fact: “While implicit bias appears when you group large numbers of people together, it doesn’t show up consistently at the individual level, which is how police officers usually interact with the public.”

Fact: “Research shows that police give up little power in this process.”

Myth #5 The police can effectively help with mental health crises.

Fact: “A 2019 study by researchers at the University of California at San Francisco and San Quentin State Prison found that evidence to support the [crisis intervention] training was contradictory and that, in most cases, deploying the teams didn’t affect arrest and use-of-force rates.”

The facilitator invites a participant to read the scriptures aloud.

As we were going to the place of prayer, we were met by a slave girl who had a spirit of divination and brought her owners much gain by fortune-telling. She followed Paul and us, crying out, “These men are servants of the Most High God, who proclaim to you the way of salvation.” And this she kept doing for many days. Paul, having become greatly annoyed, turned and said to the spirit, “I command you in the name of Jesus Christ to come out of her.” And it came out that very hour.

But when her owners saw that their hope of gain was gone, they seized Paul and Silas and dragged them into the marketplace before the rulers. And when they had brought them to the magistrates, they said, “These men are Jews, and they are disturbing our city. They advocate customs that are not lawful for us as Romans to accept or practice.” The crowd joined in attacking them, and the magistrates tore the garments off them and gave orders to beat them with rods. And when they had inflicted many blows upon them, they threw them into prison, ordering the jailer to keep them safely. Having received this order, he put them into the inner prison and fastened their feet in the stocks.

Facilitator invites discussion of the passages: