Week 5: The Landscape of Policing – Incarceration and Bail

This week we will discuss incarceration, one part of the apparatus of policing. We’ll especially focus on pre-trial detention. Pre-trial detention is punishment of people who haven’t been convicted of a crime but are sent to jail to await their trial.

The majority of people are incarcerated in the United States not because they have been convicted of a crime, but because they can’t afford to pay bail. Bail is the amount of money required to secure one’s freedom during the period before a person goes to trial. In most cases, this means that people who can afford to pay bail are allowed to prepare for trial at home, while those who cannot are forced to remain in prison. For the past decade, communities throughout the United States have been exposing the injustice of the bail system.

Hold silence for one minute bearing in mind one person who has died of police violence. At the end of the silence each person is invited to say the name of that person aloud.

“The cop pulls my arms behind my back and cuffs my wrists together. He pushes me into the back of a police van, slams the door, and transports me to the jail downtown. When we arrive another officer leads me to a holding room and plops me on a metal bench. “Wait here,” she says. So I sit and wait, with my arms pinned behind me, forcing my chest forward, stiffing my back, every breath prodding the muscles in my shoulders to cramp. Soon a guard takes me into another room, takes my belt and shoe laces, inspects my body for contraband, and finally releases my hands from the cuffs. Then I wait. And wait. When I ask a guard for information about what happens next, he ignores me. He doesn’t even look at me. He doesn’t acknowledge my existence. Without a window to the outside, the constant fluorescent lighting floods my senses, disorienting my mind, confusing my ability to distinguish one hour from the next. I’m adrift in moment after uncountable moment, an endless blank.

In the blankness, a memory: Years ago in a class I taught at a federal prison, a man turned in a paper entitled, “Captive to death.” Life in prison is a kind of death, the student wrote, because without his friends and family and work and routines on the outside, he keeps on forgetting who he is. Being locked up is a kind of death. The prison cell annihilates a person’s selfhood.

My arrest and detention ended with my release when a magistrate decided that I wasn’t a flight risk, that I didn’t need to pay a high bail amount in order to buy my freedom. Even though we’re told that people are innocent until proven guilty, the “justice” system punishes people with incarceration before someone’s conviction. It’s called “pre-trial detention.” While a small percentage of people are held without bond, most people are assigned a bail amount that they have to pay if they want to be released in order to spend their weeks before trial at home. If they can’t afford to pay their bail, they are caged in a detention center until their day in court – weeks after their arrest, perhaps months.

Facilitator displays the image and gives everyone a chance to see how the system of cash bail works in the United States. Walk through the process of money bail together. 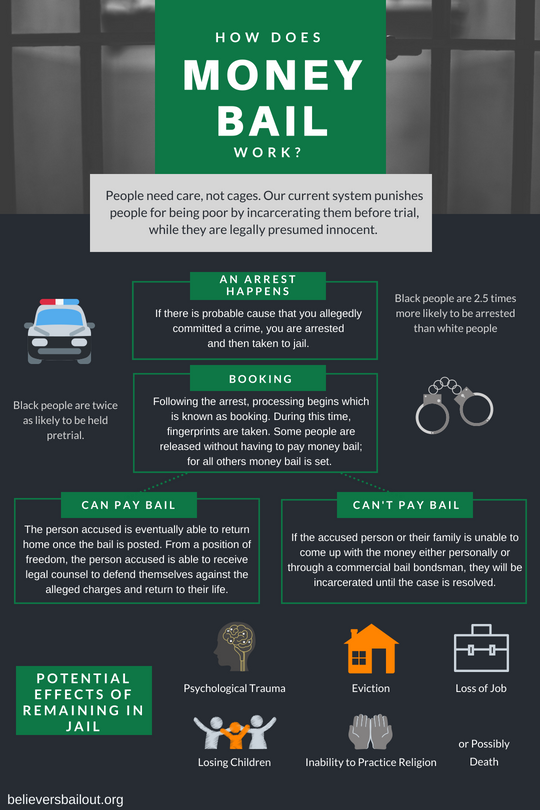 After looking at the graphic, discuss these questions:

In the early nineteenth century, upon the arrival of the newly arrested at Auburn prison in New York, the warden would welcome the detainees with these words: “While confined here, you are to be literally buried from the world.” Prison as burial. “A living tomb,” a prisoner named Harry Hawser wrote in a poem while incarcerated just up the road, in Philadelphia, at Eastern State Penitentiary. When Charles Dickens visited Eastern Penitentiary, he described the prisoner’s experience as “a man buried alive… dead to everything but torturing anxieties and horrible despair.”

In more recent history, fifty years ago, George Jackson wrote a letter from San Quentin State Prison in California. “Capture, imprisonment, is the closest to being dead that one is likely to experience in this life,” he said. “My life here is slowly becoming one of complete alienation.” Prison as an alienation from life—that was his experience, buried behind layers of concrete and metal and bricks, behind walls and bars and fences. The contemporary poet, Jimmy Santiago Baca, writing from the Arizona State Prison, said that his time in prison felt like he was confined in “an archaic tomb of concrete and iron.”

As Christians, we are Easter people. We believe in an empty tomb. We believe in the emptying of tombs, the power of resurrection to crack them open. Our faith proclaims the promise of freedom from death’s chains, the Spirit’s power to restore life. Jesus professes his dedication to this liberative work of God at the beginning of his ministry when he quotes a passage from the prophet Isaiah: “The Spirit of God has sent me to proclaim release to the prisoners” (Isaiah 61:1/Luke 4:18).

Jesus committed his life to the freedom of captives. This ministry led to his own arrest and conviction for sedition — which, in turn, liberated the prisoner Barabbas from Pilate’s dungeon (Luke 23:13-15). We believe in Jesus Christ, an executed convict, whose resurrection defies the judgments of the authorities. The Gospel narratives confront us with violence of incarceration – the way authorities claim juridical power to subject lives to detention and confinement, the total control over the body.

In this video, you’ll be introduced to the work of Southerners on New Ground (SONG) and the “Black Mamas Bailout” that looks to end the practice of cash bail in North Carolina

“National Bailout in the Streets”

In this video, you’ll learn more about the National Bailout movement and the risk assessment that goes into the work of preventing the need for incarceration (Length 2:47) [Link]

For more information on the movement to end cash bail, visit the websites for SONG and the NBO Collective.

You can also watch additional videos on the National Bailout Movement.