#WeAreMenno: “I didn’t know my name” 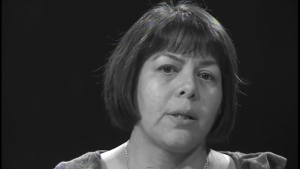 In the workshop, which was led by Hillary Watson, a pastor at Lombard (Ill.) Mennonite Church who has performed multiple times at the National Poetry Slam, participants explored the creative and powerful possibilities of spoken word performances to “bring together diverse populations and dismantle systems of privilege.” Together participants asked the question, “How can we use spoken word poetry as a tool to form and share stories of identity, trauma and healing?”

As a career social worker, government employee and associate pastor at Templo Alabanza Menonita in Moline, Mejía-Caraballo has many years of experience confronting systems of power and privilege that have marginalized people in her community who are poor, abused and vulnerable.

She says it wasn’t just the powerful poetry in the workshop, but also viewing videos of women performing and speaking the truth about their lives that inspired her to create a video based on the experience of a woman she had worked with during her 13-year social work career.

“I had had a lot of experience speaking to a wide array of audiences through my community service on local nonprofit boards as well as the local school board and city council,” reflects Mejía-Caraballo, who also serves as moderator-elect of Central Plains Mennonite Conference. “However, I had never shared personal thoughts, stories or journal writings with the public. I had never contemplated writing something and performing in front of an audience.”

Inspired by the workshop, Mejía-Caraballo returned home and stepped outside of her comfort zone to write, produce and act in her first-ever attempt at videography. In April 2014, she entered her video, titled “I didn’t know my name,” in the Opening Doors Film Festival, a fundraiser for Family Resources, Inc., a nonprofit organization that provides a safe place for women, children and families in Davenport, Iowa.

Mejía-Caraballo was awarded first place for Best Dramatic Short, which included a $1,000 cash prize that she then donated to another local nonprofit organization, which feeds and houses people who are homeless.

“When I was notified my movie had won first prize, I was shocked,” she says. “I could not believe I had won.”

Together with her husband, Josué, Mejía-Caraballo attended the film gala, where her video was shown on three large screens to an audience of about 500 people.

“We actually walked down a red carpet and had photos taken of us as we were seated,” she says. “It was a very memorable experience for a humble Mennonite woman!”

Since the festival, numerous agencies and groups have shown her video and have asked her to come and speak about its content.

“It has been a very rewarding experience for me,” she says.

She is currently working on two new spoken word projects.

“One is about the current and never-ending immigration crisis, and the other is an open letter to my son as he approaches his 23rd birthday,” she explains. “This piece deals with racial tension and violence in our country against males of color.”

Mejía-Caraballo is available for dialogue and discussion for groups interested in showing her video. She can be reached at margiemmc60@ymail.com.