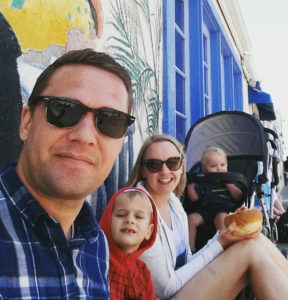 Scott Peterson is the Leadership Pastor at Trinity Mennonite Church in Glendale, Arizona, where he lives with his amazing wife and two adorable sons. He holds an ever-growing list of hobbies and a Master of Arts in Theology from Fresno Pacific University. You can find his blog and spoken word poetry at truergrit.com.

When I was just starting out in ministry I remember hearing a mentor tell me all about a particularly difficult period of time in a local church. A conflict that started relatively small grew larger over time and eventually, the congregation became so divided on the issue that it split into two rival churches. Within a few years, the congregations in both churches had declined to such a level that they were both forced to close. At the close of the story, this mentor told me, “No church splits like a Baptist church.”

I wish she had been right.

Unfortunately, I have seen just as much division and subsequent collapse in every Christian tradition of which I am aware. At first, I merely extended the boundaries of the phrase to include the new information I was accumulating. However, once I got to, “No church splits like a Baptist or Methodist or Pentecostal or Presbyterian or Nondenominational or Community church,” I realized I needed a new phrase. I started telling myself, “No church splits like one that has people.”  While I didn’t become a wholehearted cynic, I certainly left behind the blind naivety inherent in fresh ministry.

I had come to realize that if the church were to be a place in which the beautiful kingdom of God could be realized, it would have to happen at great cost.

Fast forward a few years to 2014, when I began serving at Trinity Mennonite Church in Glendale, Arizona. I was hired just as the church was beginning a year-long process of exploration together over a controversial theological topic. I had great fears that by the end of this process I might need to add “Mennonite” to my earlier list of great church splits. During that year, there was some yelling, some tears, several arguments, a lot of tense conversations and an immense amount of prayer.

It was a difficult year to be starting ministry at Trinity.

It was a difficult year to be attending Trinity.

In October of 2015, we voted on new membership guidelines solution which passed by a wide margin. It was also a solution which appeased no one. It was a solution which had taken months to plan, analyze, edit, review and re-edit. The final result was not what either side in the conversation wanted. It was approved, but it meant that everyone in the congregation had to make a sacrifice of some kind. Some more than others. It was, and still is, imperfect. No one heard the results of that vote and celebrated. At the most, we all sighed. We were hopeful that while the previous year was incredibly hard, we were going to be able to move forward together again. As a church family, we were fatigued and unsatisfied but we were still holding each other’s hands.

The amount of shock and pain in our community was palpable when we held a prayer service the following day. But all those people who were unsure about each other over the previous year were now holding each other and wiping away tears together. We may not have solved all of our theological disagreements in the year prior but we absolutely solidified our commitment to each other regardless of the cost. This is what made the difference in how we survived the tragedy of Hal’s death.

What I thought was the hardest year of ministry was just a warm up for the one that followed. Through that experience, I learned that no church embodies love together like one that has struggled and grieved together. I learned that we all truly become the church when we are willing to stand with each other in disagreement so that we will be able to hold each other up when we can’t stand.

I am now certain that true love in the church takes persistent and painful practice. Love is not a simple verb. It is a verb which requires us to use it in the hardest circumstances so that it will be strong enough to be there for us when we need it to be pure spiritual muscle memory. It must be our instinctive response, our baseline reaction, our fundamental posture and our essential vision. If the CHURCH is the noun, then LOVE must be the verb.