A few weeks ago, we lost a man of faith and courage who walked with Mennonites for a time.  Historian and activist Vincent Harding co-pastored Woodlawn Mennonite Church (Chicago, Ill.) in the late 1950s, served with MCC in Atlanta in the early 1960s, and lived at Reba Place Fellowship from 1964 to 1965.

Harding worked tirelessly to help American Mennonites of European ancestry understand African American history and the Civil Rights Movement’s cries for racial justice.  He asked Mennonites to embrace their Anabaptist heritage — to walk away from the security and safety of white middle-class America and stand in solidarity with their African American brothers and sisters.  In short, he bade Mennonites to be better Christians.

Shortly before Harding’s work became more focused within the Black community, he attended the 1967 Mennonite World Conference in Amsterdam.  There he gave two public talks:  a sermon (The Beggars are Marching) and a lecture to the Peace Section (The Peace Witness and Modern Revolutionary Movement). 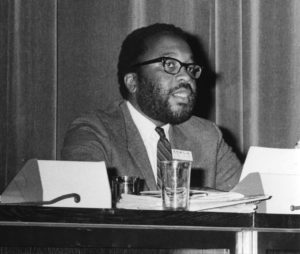 Because the challenge Harding posed in Amsterdam remain so relevant today, I will conclude this brief remembrance with Harding’s own words, the concluding paragraphs of The Peace Witness and Modern Revolutionary Movement:

Only one last conviction guides me to the end of this word: The Spirit we seek in Amsterdam might be here; but wherever he blows he is a Spirit of Justice and Truth and Love.  Christ is our guarantee of that.  Such a Spirit surely understands and is compassionate with the desperate men who often are driven by a hunger for justice, a search for true human relationships, and the building of a new community.  With such a spirit abroad, let this be our final question: Whose sin is greatest, the desperate men who use the wrong weapons to fight for justice, or the complacent men who have all the right weapons and fight no battles at all – except their own?

Let us pray for the Spirit to fill us, but let us remember that the Spirit who fills is also the Spirit who drives men out into the desert of solitary testing and refining.  If this is not the Spirit we want, then let prayers and conferences cease – beginning now.  But if, with fear and trembling, we are willing to be driven beyond all the limits of physical and intellectual and spiritual safety that we know now then the anointing may come.  Then the broken victims will leap for joy at our appearance, and the humiliated will sing a song of praise.