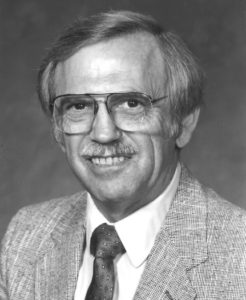 This is the second post in a series featuring people, congregations and organizations working with veterans who’ve experienced the trauma of war. The Peace and Justice Support Network, a joint project of Mennonite Mission Network and Mennonite Church USA, offers a six week Sunday School curriculum, Returning Veterans, Returning Hope, focused on returning veterans and how the church can play a part in their healing journeys. This curriculum draws from biblical reflection, the latest understandings of trauma and moral injury, and the experiences of veterans themselves.

John Kreider grew up on a farm near Palmyra, Missouri, and was number four of 10 children. For 30 years he pastored five Mennonite congregations from Virginia to California. He served as Eastern Mennonite Seminary’s admissions director from 1986 to 1995 and retired. John did fundraising in the Virginia Mennonite Conference for Mennonite Board of Missions from 1995 to 2000. He served the Mennonite Church until he fully retired in 2016. John is the father of four children – two daughters and two sons.

I am a Christian who, believes war is wrong, sinful, selfish and a money making machine for the rich. It is a creator of economic failure for more people than it makes wealthy. It creates homelessness, starvation, disease and epidemics for millions of people. It causes unthinkable human destruction for others. It breeds fear and leads to unnecessary death for generations of people.  War creates many, many more problems for the world than it resolves.

All people of the world are created in the image of God regardless of race, nationality, color, religion, ethnicity or culture. God loves all he made. All people of the entire world are loved of God. We Christians take our love cues from Jesus who loves all peoples in the world. So we reach out with open arms and open eyes to love all the people God made.

The following are two short stories of two U.S. military service men whose eyes were opened and they each had a vision of a new world and a new mission:

A young Christian United States soldier was serving out of country in a military operation. Each morning before reporting for duty, he would read his Bible and pray. This particular morning he opened his Bible to 1 Corinthians 11:1 and read Paul’s words, “Follow my example, as I follow the example of Christ.” He stopped. He could not read any further and he asked himself this question, “Can I continue to do what I am doing and be an example of Christ?” The answer to his question came back immediately, “No, I cannot.” The answer to his question was so powerful that he put in for his discharge. It was granted. He returned home, enrolled in a Mennonite seminary and today is pastoring a Mennonite congregation.

On a trident submarine fleet, operating off the shores of Massachusetts, one of the officers was a devout Christian. Every day he would take time with God in Bible reading and prayer. One day during his devotional time, he heard a voice. He listened. The voice said to him, “I do not want you to do what you are doing the rest of your life. I want you to leave the Navy and become a pastor.” The officer was both surprised and stunned. The Navy was his life. All his training had gone into the Navy. This was all he knew. He had planned to make the Navy his career. He was troubled in his spirit and soul. But the call to leave the Navy and prepare for pastoral ministry would not go away. Finally the Divine call became so strong he went to his superior and said,  “I am leaving the Navy.” “What are you going to do?” they asked him. “I am going to study for pastoral ministry,” he said. His fellow officers did all they could to convince him to stay. But the young officer said, “I have no other choice. I must leave and go to seminary and prepare for the pastoral ministry.” He did. He enrolled in Eastern Mennonite Seminary in Harrisonburg, Virginia, and became a strong witness for peace as he completed his Master of Divinity  program. Today this once naval officer with eyes wide open is serving as a voice in the Kingdom of God for peace, love and reconciliation.

There are many stories of United States Military personnel who joined the service with the conviction, of serving God and country, considering it a duty and privilege. And many of these same people have had eye-opening experiences while in combat and their lives have been totally changed. In his book, “War and the Soul, Healing Our Nation’s Veterans from Post-Traumatic Stress Disorder,” Dr. Edward Tick, Director of Sanctuary: A Center for Mentoring the Soul in Albany, New York, says, “Many soldiers lose their souls in combat and need help to reclaim their souls.”

However, it is a fact that many veterans who have come home never receive the help they desperately need and commit suicide instead – statistics are on average, 22 veterans each day across the country.Because of the deep wounds many veterans live with, wounds they carry the rest of their lives, suicide sometimes feels like the only option. Healers are needed.

I personally had a conversion experience four years ago when my eyes were opened.  I committed what life I had left to connect with these wounded men and women, and do what I can to accompany them on their journey back to hope and peace again. How do I do this? I do not condemn or criticize them for their military service. I love them. I listen to their stories of pain, sadness, disappointments and loss, as well as their achievements, triumphs and successes. They need someone to listen to them with interest. Most of them are struggling with deep hurts, guilt and loneliness. They reach out for a friend. I try my best to be a friend to them. Most will respond with warm friendship. As a volunteer, I give two hours each Monday afternoon to veterans at the Hampton Medical Center, Hampton, Virginia.