A new sense of hopefulness in Ohio Mennonite Conference

The road to healing

(Mennonite Church USA) — In late 2016, Ohio Mennonite Conference Regional Pastor Cliff Brubaker decided to hit the road. His plan was to visit every congregation in the conference, most of which are in Ohio, with a few in Michigan and Pennsylvania, in “a blitz of a tour.” 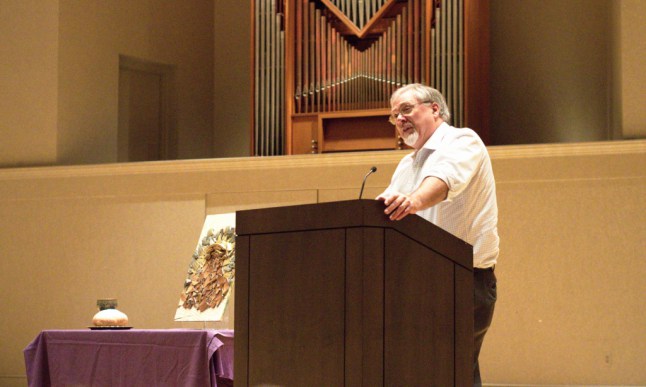 “I love these churches, I love their stories,” said Brubaker, estimating he visited about 47 congregations out of 55.

He visited and discussed the same list of questions with groups from each congregation that expressed interest during Ohio Conference’s 2016-2017 Year of Covenant, an initiative to build relationships and trust between congregations, pastors and the conference, and to gather information to set the direction for the conference’s future.

“By far the most common response was the need to learn how to make connections in the community in which the congregation is located,” Brubaker reported from his visits.

When tension rose in Ohio Conference in 2014 about the denomination’s and conference’s response to same-sex marriage, several churches switched their MC USA conference affiliation, and others left the conference and MC USA. Most churches remained.

“In some ways we’re a little more homogenous than other conferences, and a little bit more rural in setting,” said Jeff Hochstetler, pastor at Berlin Mennonite Church and member of the recent search committee for a new conference minister. The conference is largely rural with some churches in urban areas like Lee Heights Community Church in Cleveland, Toledo Mennonite Church, First Mennonite Church in Canton, and a few suburban churches. 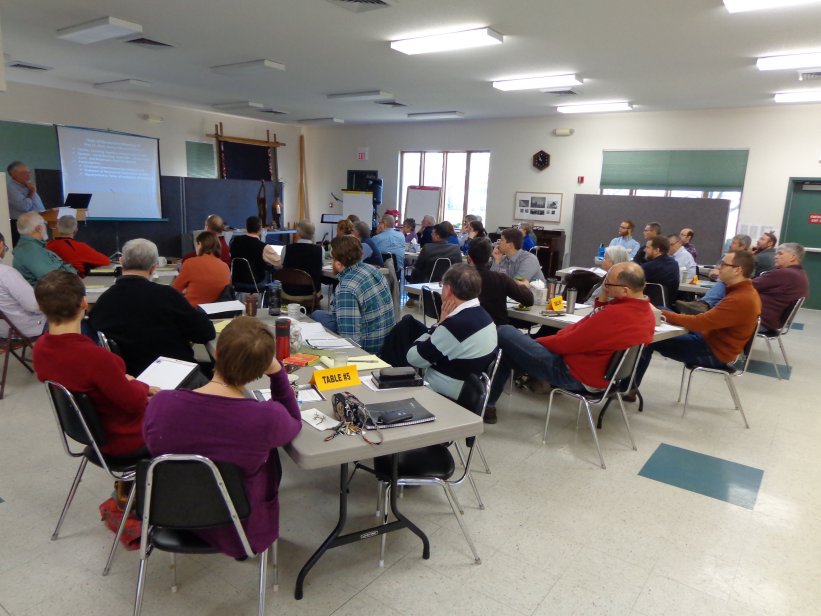 Ohio Conference pastors gathered for their third in-person meeting at Toledo Mennonite Church in February 2017 during the Year of Covenant. Ohio Conference Photo.

The conference Leadership Team invited churches to participate in the 2016 Year of Covenant, which included a commitment for pastors and leaders from across the conference to attend regular in-person meetings.

“Pastors in one geographic location had different perceptions of what was happening in conference than in other locations,” said Paula Snyder Belousek, pastor of Salem Mennonite Church in Elida, Ohio. “It became clear we didn’t know each other.”

At a gathering for pastors in February 2017, Brubaker led a session focused on healing relationships. He created space for identifying and naming tensions and disagreements between them and invited everyone to lay these on the altar together.

“The pastors can point to work done leading up to and in that meeting as really important in helping build confidence and expectancy among pastors,” said Brubaker.

During Brubaker’s congregational visits, he asked each for feedback on a plan created by the conference Leadership Team to continue being part of MC USA with the caveat that if that if the denomination or conference changed its teaching position on same-sex marriage, this would be cause for review. This proposal included “putting our best energy into being and becoming missional congregations together” and “minimizing the effort spent on the same-sex marriage issue.”

People with differing views on human sexuality expressed a desire for more work or resolution on this issue, Brubaker said. “Though many congregations noted a wide range of perspectives, congregations generally found the statement to be a good way to move forward,” he reported.

“To say we’ve moved beyond conflict is an illusion,” said Hochstetler. “There is always tension in groups, but we can focus on our mission together. We are better together than apart.”

The conference also had a simultaneous Year of Mission initiative led by a group of younger pastors who set out to “agitate and advocate” for intentional, missional work in local contexts. 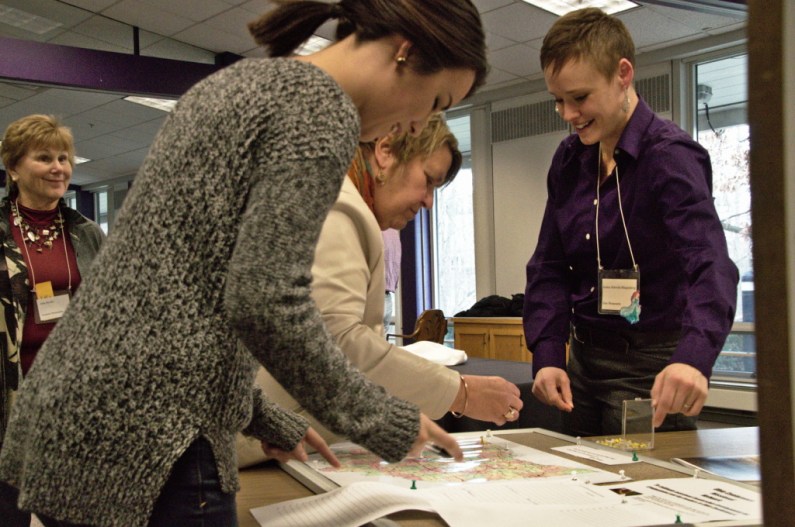 At the 2018 Annual Conference Assembly, Jessica Schrock-Ringenberg (right), who formerly served as missional consultant, invited participants interested in joining a missional network to mark their congregations on a map. Photo by Bryan Leaman.

At the 2017 Annual Ohio Conference Assembly, after completing the Year of Covenant and Year of Mission, the delegates overwhelmingly voted on a “healthy budget” with the plan to spend into reserves if necessary to invest in missional work. Financial giving has since gone up, Brubaker said.

“In some ways we are reclaiming a piece that’s been lost along the way,” said Brubaker. “Ohio Conference started because of a desire to be engaged in mission.”

“There’s intentional activity of pastors working together,” said Hochstetler. Several pastors from Ohio Conference participate in the East Central Ohio Sanctuary Support Network, an ecumenical group of pastors who support each other in standing up for undocumented immigrants, he said.

“It’s said again and again there is a new sense of hopefulness and willingness to collaborate in the conference,” said Brubaker. “We’re thankful about that. We trust that God’s spirit was at work in that.”

Ohio Mennonite Conference selected Dick Barrett to fill the role of conference minister in Sept. 2018, to begin this position full-time in Jan. 2019. Barrett has served as a pastor at Oak Grove Mennonite Church in West Liberty, Ohio, for 16 years.

Snyder Belousek, who chaired the conference minister search committee, said that important tasks for Barrett will include helping the conference through structuring and visioning going forward.

“It is hard to see all the new people who have come into Conference over the past several years and not be hopeful,” Barrett wrote in reflections in the Dec. 2018 Ohio Mennonite Evangel. “Does this mean there won’t be challenges ahead? No. Just as God has allowed us to work through our most recent challenges, he will lead us through more challenges to continually transform us into the people he wants us to be.”

“We’re not saying everything’s resolved,” said Snyder Belousek, “but we have committed space to listen to God’s spirit and dream together about who God is calling us to be.”

“I hope that Conference can be a place where we talk about our strength together,” said Hochstetler. “I hope that we can write a new story about living out the conference values in a way that resonates with the church of today.”