Being ‘the first’ and accepted 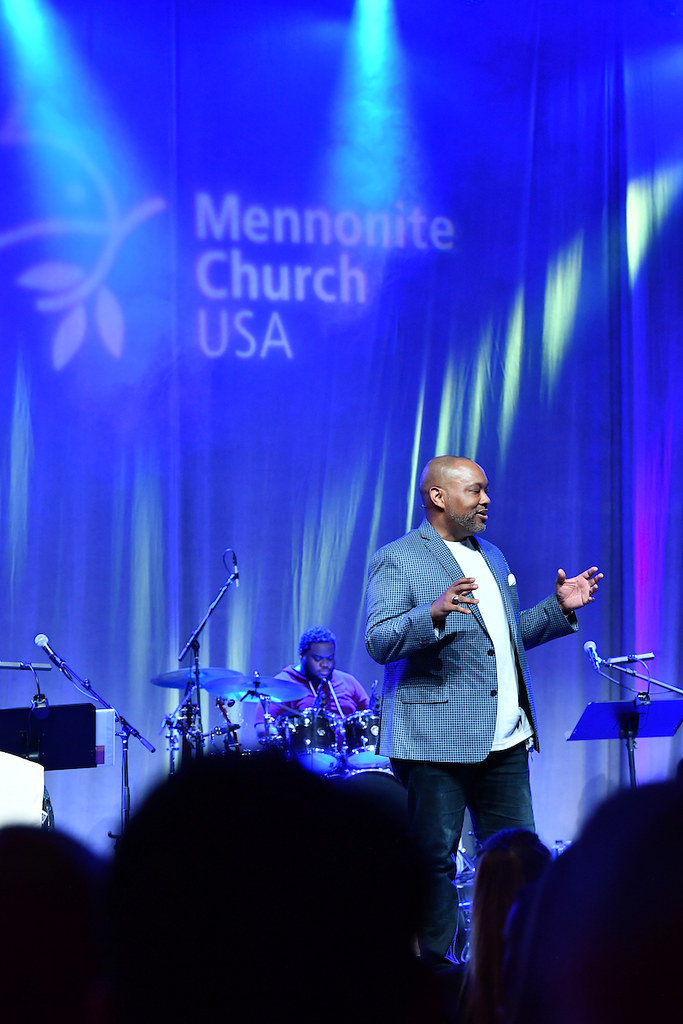 (Mennonite Church USA) — “God calls us to strange places in strange ways,” Glen Guyton said in a sermon to Pasadena Mennonite Church on Jacob’s calling from God at Bethel in Genesis 28. He relates this theme to his own experience, which includes becoming part of the Mennonite church in 1993. This led him to leave his position in the United States Air Force as a conscientious objector. Now, after two years as executive director of Mennonite Church USA (MC USA), Guyton reflects on his experience and how Mennonites are uniquely positioned to speak prophetically to the issues of today.

Guyton often acknowledges that he is a Generation X-er and that he is a non-ethnic Mennonite, which means that he did not come from the European heritage historically associated with Mennonites. This is true for many who are now Mennonites and Anabaptists. A study found that between 2002-2007, 25% of new MC USA members were from non-white racial/ethnic groups. As of 2018, North American Mennonites and Anabaptists made up only 30.5% of the global church’s membership, with about two thirds of the world’s Anabaptists located in Africa, Asia and Latin American, according to Mennonite World Conference.

There seems to be a generational shift in MC USA that values greater transparency, Guyton said, and he feels that this relieves some of the church’s focus on traditional Mennonite ethnic identity.

“I have the benefit of having an outsider’s perspective,” Guyton said. “I see the value of our theology and the sense of belonging. People want to belong to this denomination, so we need to be open to that and see the growth potential that we have.”

Guyton started working for MC USA in 2009 to promote intercultural relations and became the first African American executive director of MC USA in 2018. He said he does not feel that he needs to represent all black people or all younger people. “But it is something that I do have to keep in mind, and I want to do my best to break down negative stereotypes and bias,” said Guyton.

Guyton referred to the “glass cliff,” a trend that happens when organizations that are experiencing challenging circumstances and high risk are more open to promote women or people of color into leadership. If the organization succeeds, Guyton said, it tends to return to its more traditional leadership.

“That’s always in my mind: what’s next for MC USA,” said Guyton. “Often times, when you have the first of any group, there’s a response by institutions. And so, I wonder — will my non-traditional approach propel the institution to greater growth and openness, or will it lead to a snap-back into more traditionalism?”

“We always want to romanticize people of color, that they’re the growing edge of the church,” Guyton said. “I don’t like that narrative. If we live into who we are as Anabaptists, there are opportunities for all of us to live into our communities, to make a difference. That’s not limited to a racial identity.”

Guyton said he has noticed that sometimes Mennonite leaders attempt to set aside their identities to be leaders, but he encourages people instead to bring who they are into their roles. “I think we should all be able to incorporate our identity into our leadership role, which is something we often miss in the Mennonite church,” he said.

Guyton credits the many people of color from past generations who broke leadership barriers in the U.S. Mennonite Church. Recent leaders who have inspired him include Bishop Leslie Francisco, pastor of Calvary Community Church where Guyton first joined the Mennonite church; Carlos Romero, former director of Mennonite Education Agency; and Stanley Green, director of Mennonite Mission Network, who plans to retire in July 2020. “These first prominent leaders of color in the denomination really paved the way for my leadership,” Guyton said.

Guyton noted the great opportunity Anabaptists have to offer creative alternatives to the current tendency in society to polarize one another. Introducing the churchwide call to #BringThePeace at MennoCon19, he encouraged Mennonites to renew their focus on acting as a present-day peace church in addition to being a historic peace church.

“Our message is very appropriate for this day,” Guyton said. “We have to keep building a vision for the future. The sad thing is when we lean into the polarization instead of leaning into our call as Anabaptists.”

Guyton says that serving as the director is demanding, and he is always grateful for prayers, particularly for wisdom in leadership and good health.

“My focus is on what the church has to offer, what’s possible,” Guyton said. “The church reached out to me and accepted me, and I want other people to have that opportunity.”