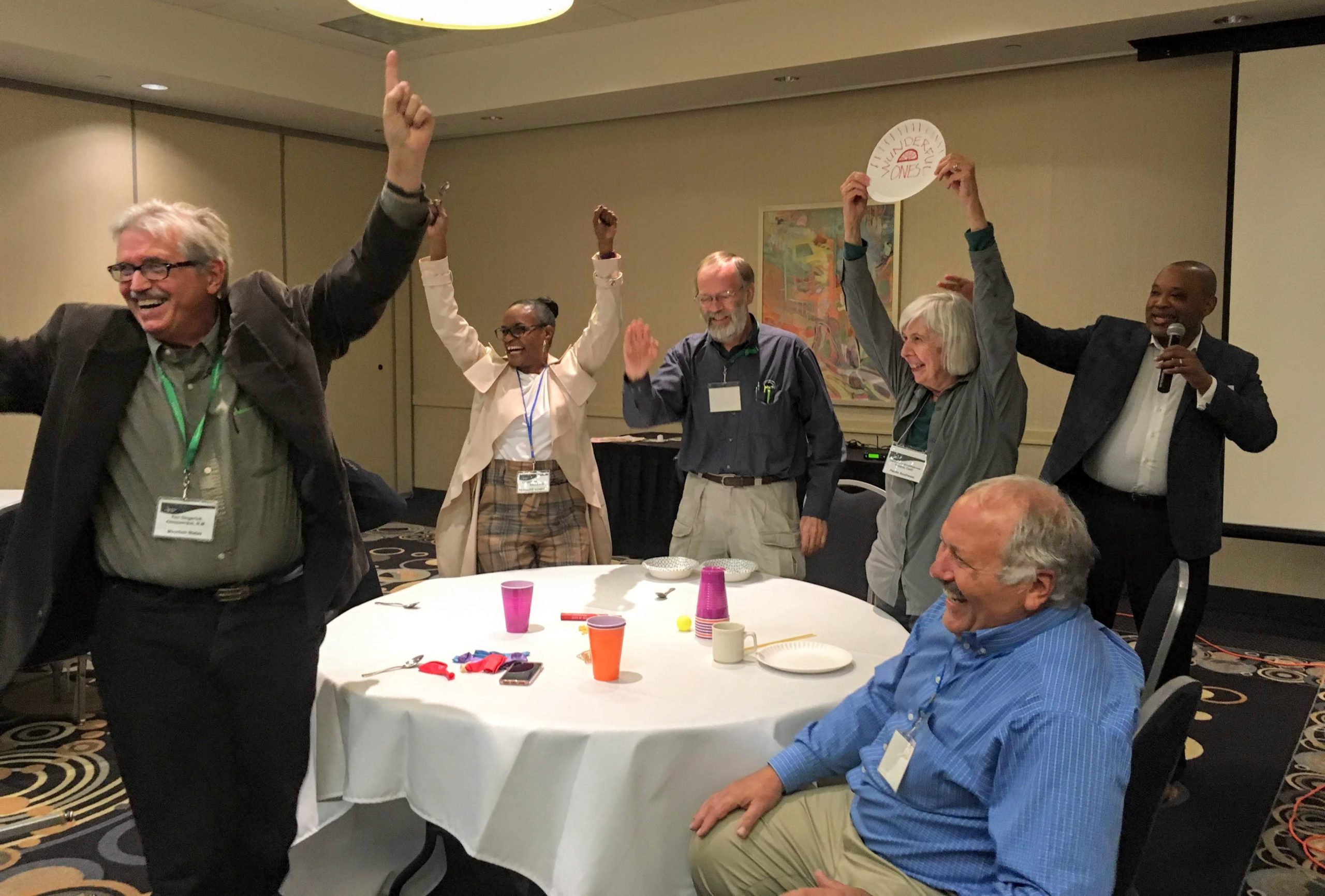 The Constituency Leaders Council meeting in Elk Grove, Illinois, included an evening of games styled after “Minute to Win It,” where teams worked together to quickly complete tasks and have time for fun and laughing together. Photo by Kayla Berkey

ELK GROVE, Illinois (Mennonite Church USA) — “You all are the leaders of MC USA. You are the hands and feet in this denomination,” said Glen Guyton, executive director of MC USA to the October 11-13 meeting of the Constituency Leaders Council (CLC).

The question of how MC USA leaders can help the church to thrive was discussed in several ways during the meetings that took place just outside of Chicago, Illinois. The CLC is a group that serves as denominational elders and includes area conference leaders, an Executive Board representative, constituency group representatives and agency and MC USA staff.

Guyton shared his strategic plan for 2019-2021, expressing that his goal is to function in this role with clarity and transparency, making sure that CLC members are clear in what is expected from them. CLC is not a decision-making body, but it is valued for its role in providing counsel for decisions that will go to the Executive Board, he said. 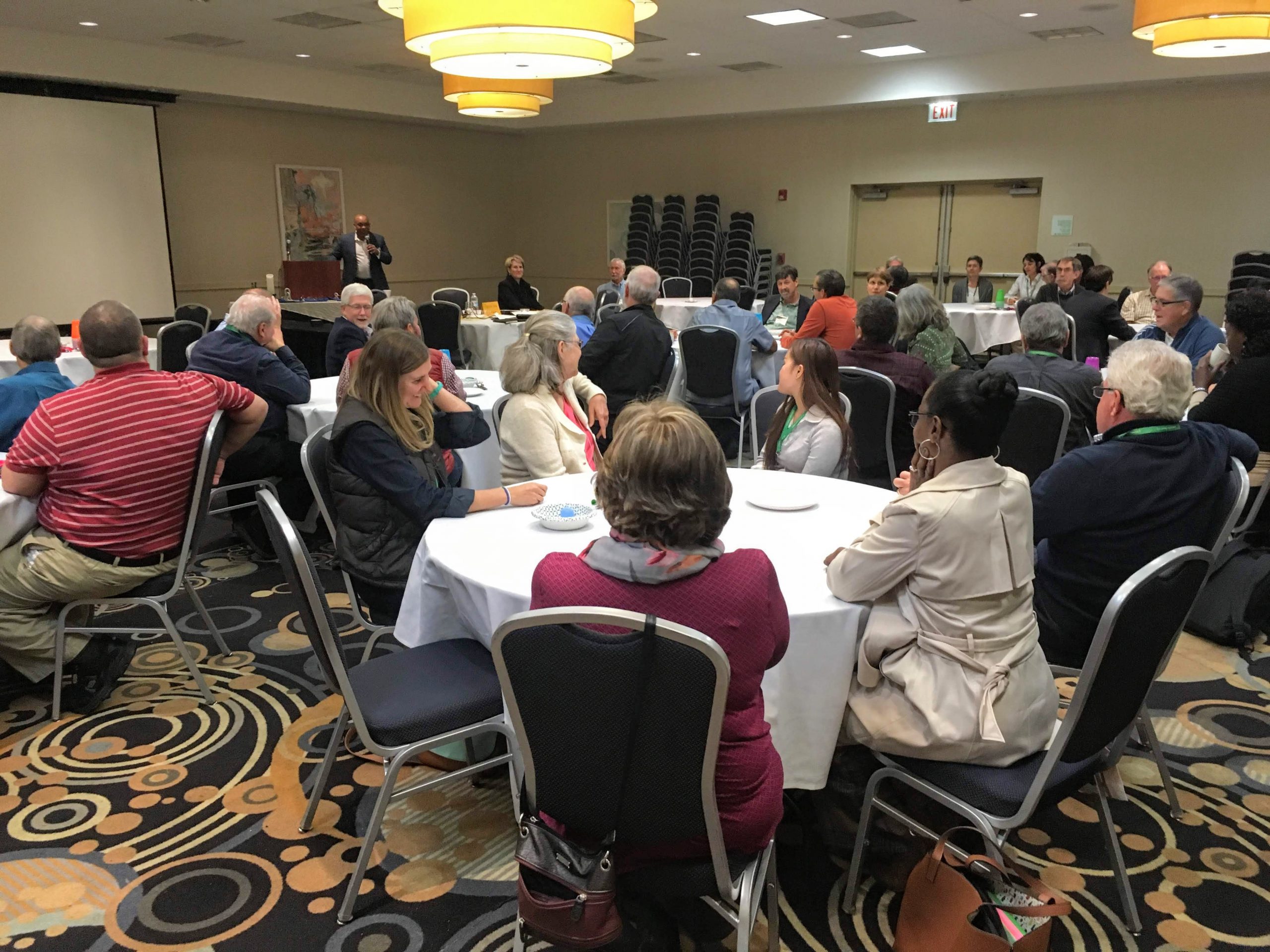 Guyton announced that Southeast Mennonite Conference (SMC) voted to leave the denomination at their annual assembly on October 6. Guyton said that when he recently spent a week visiting people within SMC, he encountered a lot of misinformation and heard some people express that they did not feel their “conservative” perspectives were being adequately represented in MC USA. He invited all MC USA voices to contribute and share perspectives on the denomination’s Menno Snapshots blog in a respectful and scripturally-based way.

“‘Conservative’ or ‘progressive,’ your voice is welcome in Mennonite Church USA,” said Guyton. “You have to be bold enough to speak to what God has called you to believe.”

Guyton also addressed an Executive Board vote taken at the joint EB/CLC meeting in April 2018 to approve a policy that allows for anyone to be considered to serve in a leadership role appointed by the board if they are in good standing with their congregation or, if a credentialed person, the area conference holding the credential. The EB asked the CLC to provide counsel and feedback on the policy, but some CLC members felt it was not clear how the EB used their counsel.

“Going forward, I plan to be clear about the expectations of what we’re asking from the CLC and how what we ask for will be used,” Guyton said.

“We are here because we all want the church to thrive,” said Michael Danner, associate executive director for Church Vitality and Engagement in MC USA, as he led a session that asked leaders to examine their leadership roles and how their leadership can function in healthy or unhealthy ways. He called attention to trust-building as a foundational initial step for building healthy relationships within leadership structures. The absence of trust, he said, can lead to a fear of conflict and artificial harmony and ultimately unhealthy ways of relating to one another.

“Everyone who has said yes to a leadership responsibility is responsible for the health of the team or group they are leading,” said Danner.

David Boshart, moderator for MC USA, followed Danner and reviewed the polity, or organizational structure, of MC USA. He said that MC USA has struggled to build a structure that functions in healthy ways. 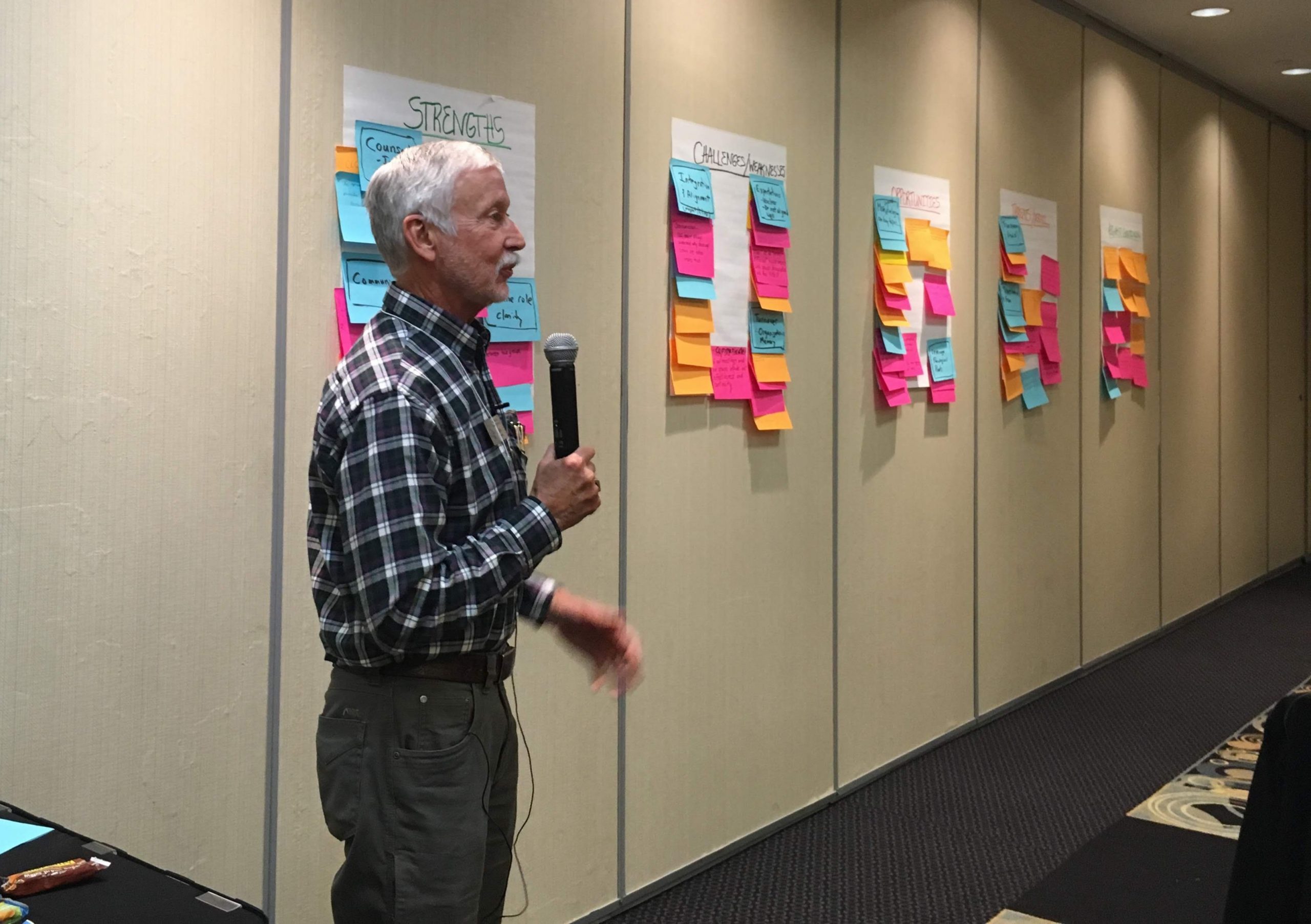 “How can we think about polity in a way that makes each other more human to one another?” said Boshart. “We need a kind of relating that is always moving us toward healthy structures.”

In an overview of the role of MC USA documents and confessions of faith in the Mennonite tradition, Boshart emphasized that new confessions do not replace previous ones. Each new confession is an attempt to describe the same Anabaptist faith for a new time. Confessions are best understood as “what the church said when it last spoke as the church,” he said.

Joy Sutter, moderator-elect, invited feedback from CLC members about the church structure’s strengths, challenges and opportunities. This feedback was discussed in table groups and compiled on large panels, which Jack Swaim, vice-chair for CLC, grouped into categories that will be shared with the EB at their next meeting in early November.

Proposed termination of The Mennonite, Inc. as an entity of MC USA

Guyton presented information to the CLC about the proposed termination of The Mennonite, Inc. (TMI) as an entity of MC USA. This recommendation comes from a task force created by the board of TMI and Mennonite World Review, Inc. (MWR) to merge the two organizations.

As an entity of MC USA, TMI is not an independent company. Though it functions as fiscally independent, TMI is a ministry of MC USA, Guyton said. He said the EB is generally favorable toward the merger, but there are still numerous details for the staff to negotiate.

Guyton requested feedback from the CLC about what gaps would be created through MC USA losing TMI. He also expressed opportunities that could stem from this change such as new partnerships, a smaller governance structure, and increased innovation and creativity in how the denomination could fill communication gaps.

Sheldon Good, executive director of TMI, said that the merger is motivated by sustainability concerns, with a trend of declining subscriptions for both TMI and MWR. The new organization would intend to have “a supportive relationship” with MC USA, said Good.

CLC members discussed a variety of questions and responses, including concern about transferring subscriber information and MC USA assets to an independent organization, ideas for strengthening the communication outlets of MC USA apart from TMI and trust that the EB board has considered the many factors.

The EB will discuss final details at a November meeting, taking into consideration the feedback obtained from the church elders at CLC.

Lee Miller, conference minister of SMC, shared an overview of the conference’s discernment process that began in 2015 for ending their affiliation with MC USA. The CLC offered a sending prayer for Miller and SMC.

“Personally I’m sad for leaving, sad for separation and division,” Miller said. “I hope and pray that MC USA will thrive in spreading God’s kingdom.”

“If you leave, leave in faith,” Guyton said. “We want to not only pay attention to the congregations that are leaving, but the new churches that we are planting and how we are spreading the message of Christ.”

The CLC gathering had a prayerful ending, with people taking turns washing each other’s hands and expressing to each other, “You are important to me.”