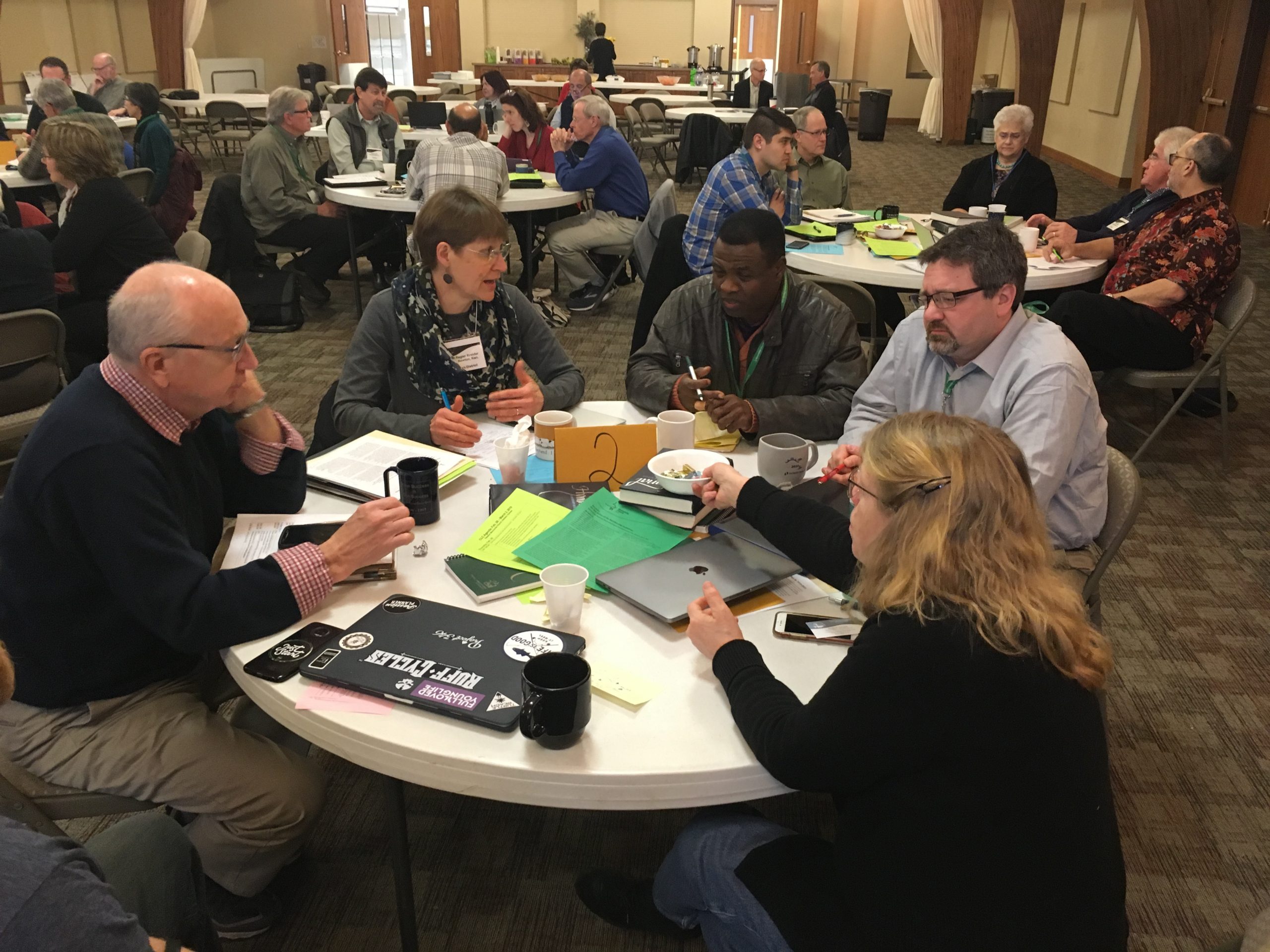 Shannon Dycus, who served as worship leader, began the gathering with communion as a reminder that “God gives to us first.” She invited CLC participants to reflect together on what gifts they have been given and what gifts are theirs to give.

Michael Danner, associate executive director for Church Vitality and Engagement, read the membership guidelines out loud with the group, emphasizing the importance of knowing what the documents say before discussing them. The guidelines became part of the denomination’s bylaws when MC USA formed in 2002 and were reaffirmed by delegates at the 2015 assembly with the stipulation that no changes would be considered for four years. Danner asked CLC members to consider the question, What is the best way for MC USA to discern a process for the future of the guidelines together?

The CLC, which consists of representatives from MC USA area conferences, agencies and Racial/Ethnic groups, is not a decision-making body but provides the MC USA Executive Board (EB) with feedback and recommendations, what Danner called “relational authority.”

Danner noted that “there is a distance between the official teaching positions of MC USA concerning same-sex marriage and current practices.” He added that some congregations and conferences ask the EB why they don’t enforce the guidelines while others ask when the guidelines will be dropped or revised. There are many nuances to the discussion, he said.

“Both sides are asking the same question: What are we going to do about the distance created between what we say and what we do?” said Danner. “I don’t know of any conference minister that doesn’t deal with this tension.” 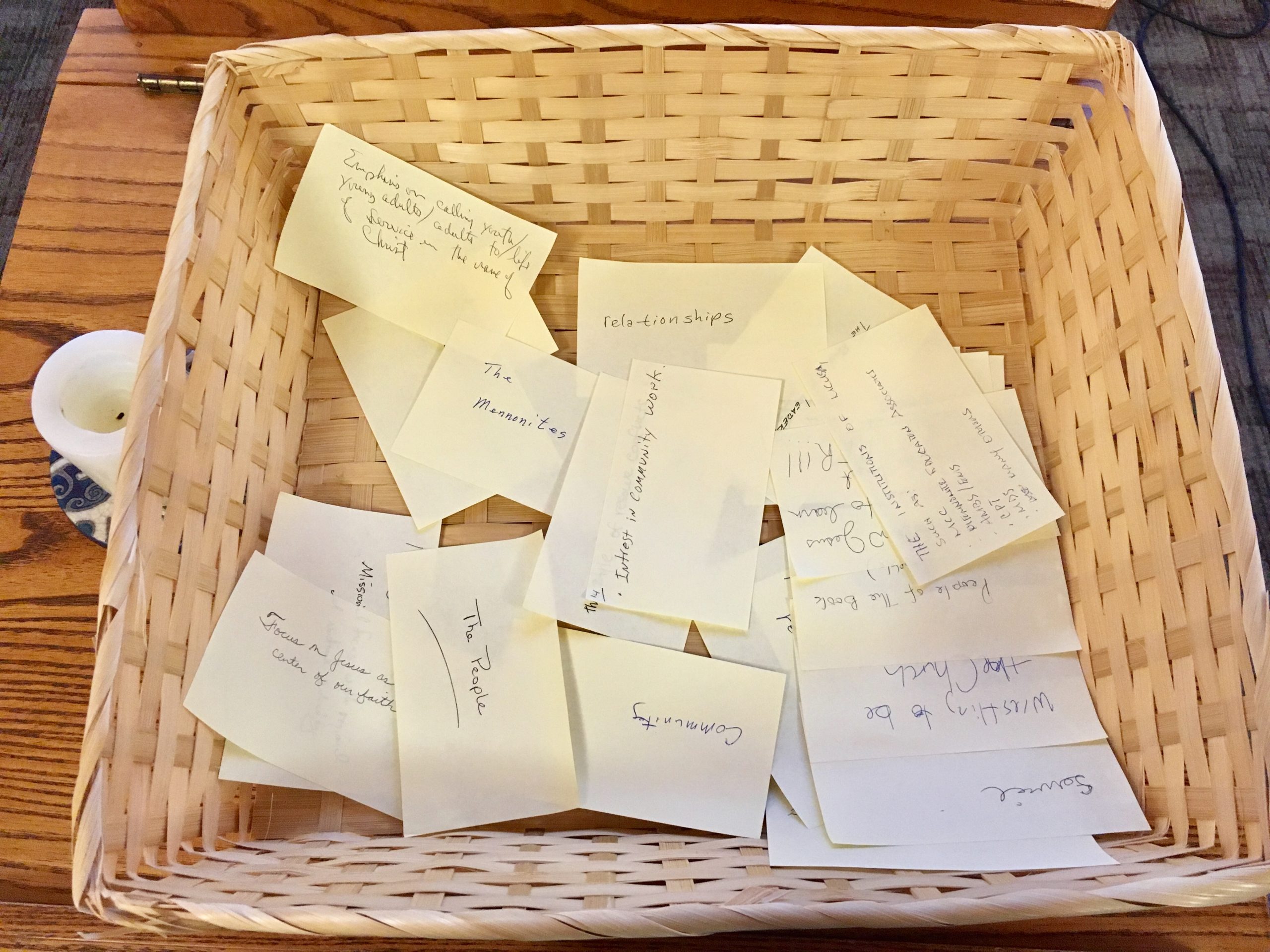 CLC attendees were invited to share what they love about MC USA, and responses were shared throughout the meeting. Photo by Kayla Berkey.

Danner guided the approximately 60 CLC participants through a feedback process as they talked around tables. Out of the feedback, he listed eight recommendations, which CLC members then marked according to their top choices and the one they think should not be considered. He said he will tabulate the feedback into a summary to provide for the EB meeting scheduled in April.

He emphasized, however, that this is a process. There are no plans to bring a resolution to this summer’s delegate assembly regarding membership guidelines, he said.

Other bylaw changes are planned for the delegate assembly, and Glen Guyton, executive director of MC USA, presented these for discussion.

Another proposed bylaw change that would impact the current services of The Mennonite, Inc. (TMI), an entity of MC USA, was tabled due to developments on March 1 when Guyton, moderator Dave Boshart and moderator-elect Joy Sutter, who also chaired the CLC meeting, met with Barth Hague, chair of the TMI board.

After their meeting, Hague spoke to the CLC and said that a merger with MWR could become an option again. He said the independent voice of TMI is an important legacy. The merger had been proposed last year, but the TMI board decided to withdraw on Nov 13.

“There is a role for this body to communicate who we are, internally and externally, and we need to enhance that,” Guyton said.