ORLANDO, Florida (Mennonite Church USA) — The delegate assembly re-convened Saturday morning at the Mennonite Church USA 2017 convention in Orlando, overwhelmingly voting to accept the final report and outcomes of the Future Church Summit (FCS) as a guide for discerning the church’s ongoing work and ministry.

Executive Board (EB) member Samuel Voth Schrag presented the EB’s proposed resolution stating that the delegates “receive the FCS Theme Team’s report as the direction of our national body.” In response, delegates expressed various concerns, including the need for more time, a lack of specifics in the FCS Outcomes Report, and that important voices present at the FCS and in the wider church were missing in the Delegate Assembly. Some non-delegate observers yelled out in protest with concerns that the delegate process was undermining the summit’s more “representative process.” Several delegates said they were not ready to affirm the report as the church’s future “direction.” 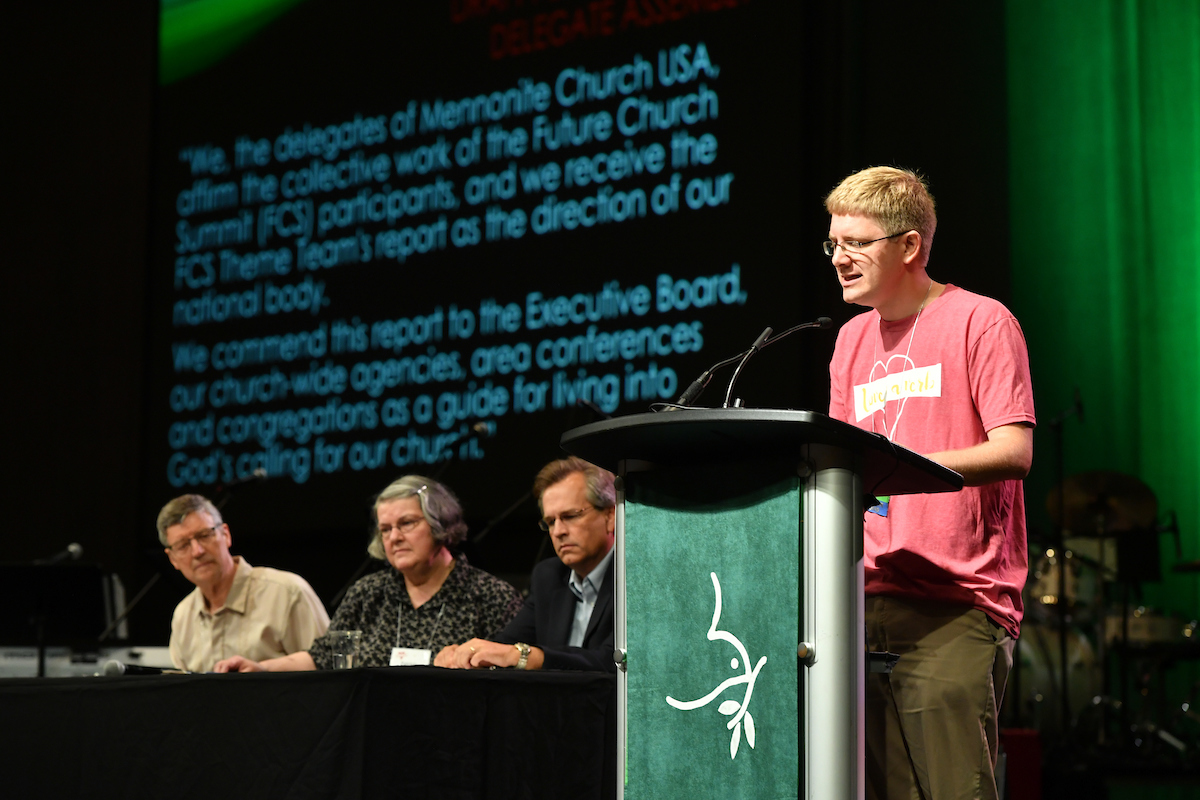 EB member Sam Voth Schrag presenting the FCS resolution to the delegates at the Delegate Assembly in Orlando. Photo by Kenneth Krehbiel.

Following what’s known as a friendly amendment, the final resolution stated: “We, the delegates of Mennonite Church USA, affirm the collective work of the Future Church Summit (FCS) participants, and we receive the FCS Theme Team’s report. We commend this report to the Executive Board. We intend that this report be a dynamic document that is offered to the church to guide further discernment for living into God’s calling in agencies, conferences, constituency groups and congregations.”

Incoming moderator David Boshart of Wellman, Iowa, said the report would shape the priorities of the Executive Board in the upcoming biennium in a continuing process. The next convention — Kansas City in 2019 — would “serve as a checkpoint” for progress on that work, he said. Orlando moderator Patty Shelly formally transferred authority to Boshart at the end of Saturday’s session. “In this moment I am filled with love for our church,” Boshart said.

Delegates also heard greetings, music and prayer from the four-person delegation from the Mennonite Church in Tanzania, which will be traveling to churches around the country in the coming weeks, and affirmed a resolution thanking all those who served in leadership at the convention. Mennonite Church USA executive director Ervin Stutzman, who is retiring next spring, also received a special expression of gratitude.

The Anti-Racism Team and Listening Committee gave summary reports, noting some frustrations over inclusion and representation of people of color during open mic times, also noting the widely voiced concern that Latino/a and Asian histories were not adequately represented in the FCS 100-year timeline exercise. They reminded the gathered body that the FCS has begun to name ongoing dynamics of harm to people of color that is rooted in the church’s history and culture. They identified improvements exemplified in the FCS process and leadership throughout the convention, but challenged the church to continue to do better.

Earlier, the FCS participants held their final session, reviewing all the common themes that had been produced over the previous two days and using polling technology to register their level of affirmation. Participants voted on a scale of 1 (lowest) to 5 (highest) to express their level of confidence in the reports of the Theme Team, which was charged with gathering and compiling all the input from the table groups and finding common threads. Separate polls were taken of the report from the bulk of the summit, which looked at broader ideas and values, and from Friday evening’s session, which specifically focused on hopes and vision for the denomination.

Both pieces received strong agreement that they accurately represented the conversations of the FCS. The first section had almost half of participants — 49 percent — giving a 5 to the report, and another 40 percent giving a 4, with an overall average of 4.3. The second section received a 5 from 45 percent of participants, a 4 from 40 percent and a 3 from 11 percent, for an average of 4.2.

At the start of Saturday morning’s session, Sarah Bixler offered a prayer that summed up the week’s journey: “This week we experienced many things. We have had moments of hope, moments of disappointment, moments of joy, moments of pain — and we hold these in prayer together now with one another as the church.”

The Future Church Summit Outcomes Report can be found at: mennoniteusa.org/resource/future-church-summit-outcomes-report/