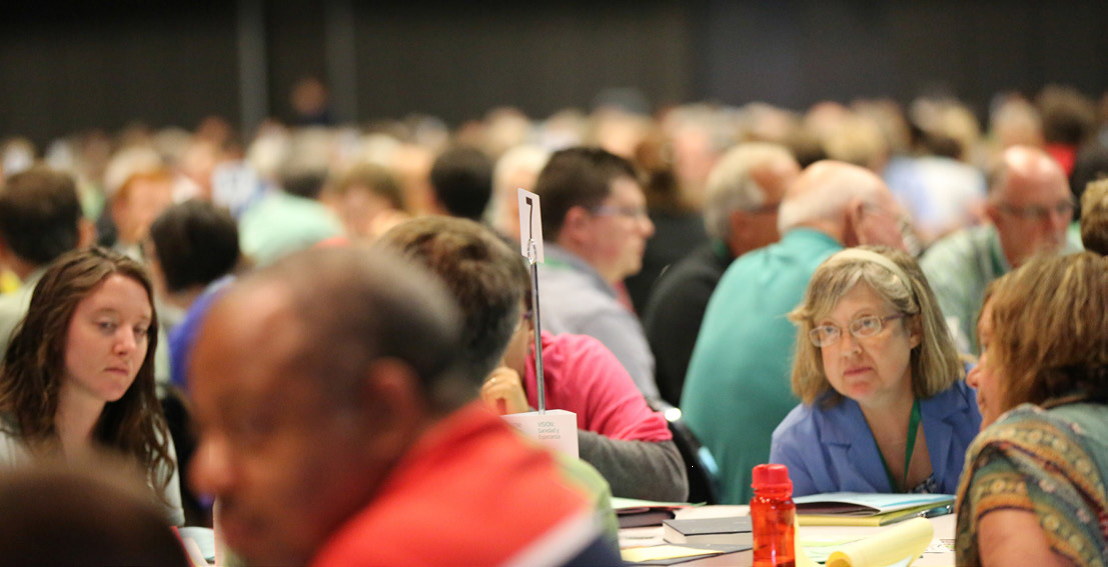 Delegates in table discussion at Delegate Assembly on July 1, in Kansas City, Missouri.

KANSAS CITY, MISSOURI (Mennonite Church USA) — Delegates remained divided on the Israel-Palestine Resolution at the end of Wednesday’s second delegate session. After two preliminary surveys using green, yellow and red sheets of paper to indicate levels of support for the resolution, delegates voted by ballot to decide whether to table the vote on the resolution until the next assembly in 2017. This tallied vote will be announced at Thursday morning’s session. [Editor’s note on July 2: The vote to table the resolution passed by 55 percent — 418 in favor, 336 opposed, 28 abstaining.]

Moderator-elect Patricia Shelly invited supporters of the resolution to speak, including Tom Harder, pastor of Lorraine Avenue Mennonite Church in Wichita, Kansas, who reiterated the resolution’s opposition to Israel’s military occupation of Palestine.

“This resolution is not anti-Jew or anti-Israeli; this condemns violence on all sides, including the United States’ government support of it,” he said. “This [resolution] affirms nonviolent acts of love and peace to all people of Israel-Palestine.” He noted that Everence, the stewardship agency of Mennonite Church USA, supports the resolution.

During an open mic sharing time, Gary Nabors of East Peoria, Illinois, suggested tabling the resolution until 2017 to be rewritten, calling it “edgy,” which he feels is against the Mennonite faith and beliefs.

Femi Fatunmbi, a pastor at Royal Dominion International Church in Los Angeles, reminded delegates of the purpose behind the resolution.

In addition, delegates approved a response to the Executive Board’s statement of confession in an April pastoral letter to delegates. Clyde Kratz, executive conference minister for Virginia Mennonite Conference, along with nine delegates from three area conferences, proposed a resolution acknowledging that the assembly had heard the Executive Board’s confession and offering forgiveness. The resolution passed with broad but not unanimous support.

In other business, delegates approved updating goals for the next two years for the Purposeful Plan, a list of churchwide priorities in Christian formation, Christian community, holistic Christian witness, stewardship, leadership development, advancing intercultural transformation and undoing racism, and church-to-church relationships. Stutzman noted how the goals from the previous two years have changed “dramatically” in response to national and global events.

Additionally, the majority of delegates affirmed the nominees for churchwide boards that the Leadership Discernment Committee had presented in Tuesday’s delegate assembly session.