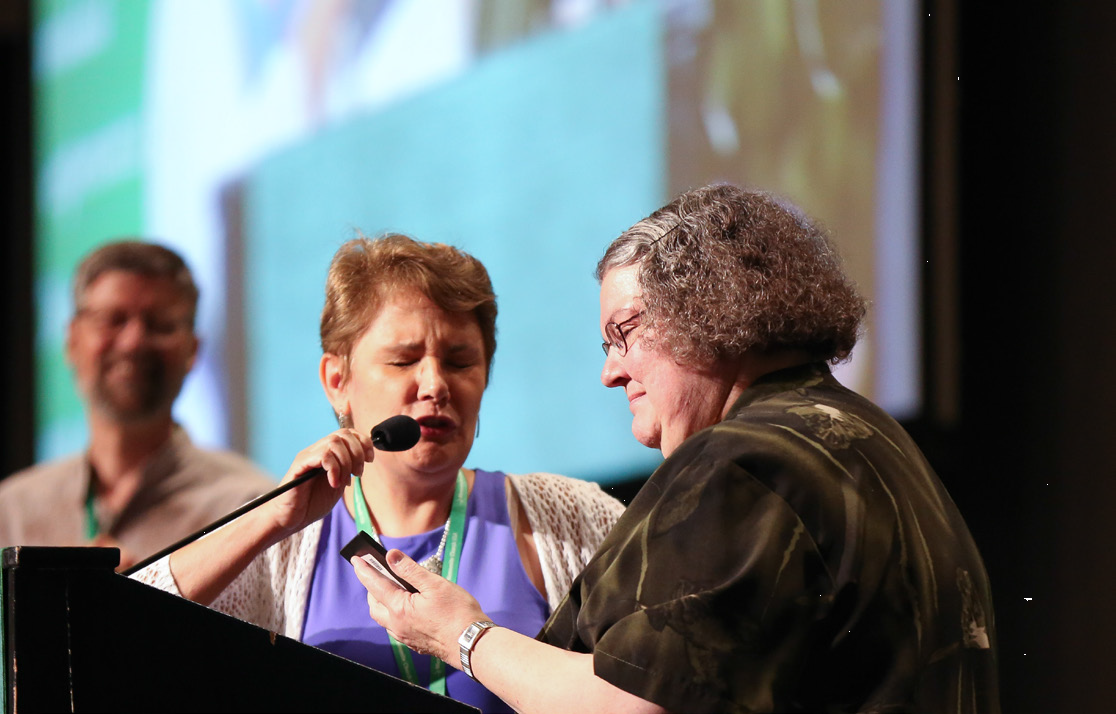 KANSAS CITY, MISSOURI (Mennonite Church USA) — Delegates unanimously approved two new resolutions during the final delegate session on July 4. The resolutions were brought forward on site and scheduled to be heard the last day during the time allotted for unfinished business.

A Statement of Support for Israeli and Palestinian Partners in Peacemaking, proposed by the Mennonite Palestine-Israel Network (MennoPIN), was drafted in response to the tabling of the Resolution on Israel-Palestine on July 1. It laid out goals for Mennonite Church USA congregations to work toward for the next two years, until the revised resolution is brought to the 2017 assembly in Orlando, Florida.

According to the resolution, “We will strive to understand more fully the social, economic and political context in which you [Israeli and Palestinian partners in peacemaking] live, work and pray,” as well as “to discern ways we can seek a more just future for all peoples of Israel and Palestine.” Moderator Elizabeth Soto Albrecht asked delegates to vote by standing; the vote was unanimous.

Alex Awad, an evangelical Palestinian Christian from Jerusalem who is pastor of East Jerusalem Baptist Church and a professor at Bethlehem Bible College, was asked to speak following the passage of the statement. “I was planning on using this time to scold,” he joked, “but after witnessing what I just saw, I come saying ‘thank you’ on behalf of my people.”

Awad shared about his experience of having received a Christmas gift from Mennonites while he was in boarding school as a boy; each child got one gift wrapped in a towel.

“The Mennonites have given us so much more than the bags with toothpaste I received as a boy,” he said. “You’ve been with us since 1948, when others rejoiced in the victory of Israel over the Palestinian people. You came with love, gifts and medicine. You taught us the principles of Jesus from the Sermon on the Mount — how to love our enemies and how to be peacemakers.”

He thanked delegates for taking time to study the Kairos Palestine document, which he said “calls for peace for both Israelis and Palestinians to live together in the Holy Land.”

The second resolution of the day, Expressions of Lament and Hope, was introduced by Pastor Kenneth Thompson, Executive Board member from Bronx, New York. It was brought forward by the African-American Mennonite Association in response to the June 17, 2015, shooting of nine African-Americans in Charleston, South Carolina. After reading the Mennonite Church USA vision statement, Thompson said, “Let us be true to our published vision statement. Let us model for our neighbors, communities and the greater global community more than just commitment to non-resistance and peace but also a call to nonviolence.”

According to the resolution, Mennonite Church USA will “continue to build awareness and direct resources and energy to continued anti-racism education among our constituencies and to stand in solidarity with the African-American community as destroyed properties are rebuilt and ministry occurs to broken bodies and souls.” The resolution also passed unanimously as all delegates rose to their feet.

Before the resolutions were introduced, Soto Albrecht and Mennonite Church USA Executive Director Ervin Stutzman acknowledged the empty convention lanyards they had been handed. They were from delegates representing both “progressive and traditional congregations” who were deciding to leave the delegate meetings, according to Soto Albrecht.

“We acknowledge the pain of those who feel they cannot worship as one body with us. There is no perfect church,” she said. “Thank you for believing in our beloved denomination.” 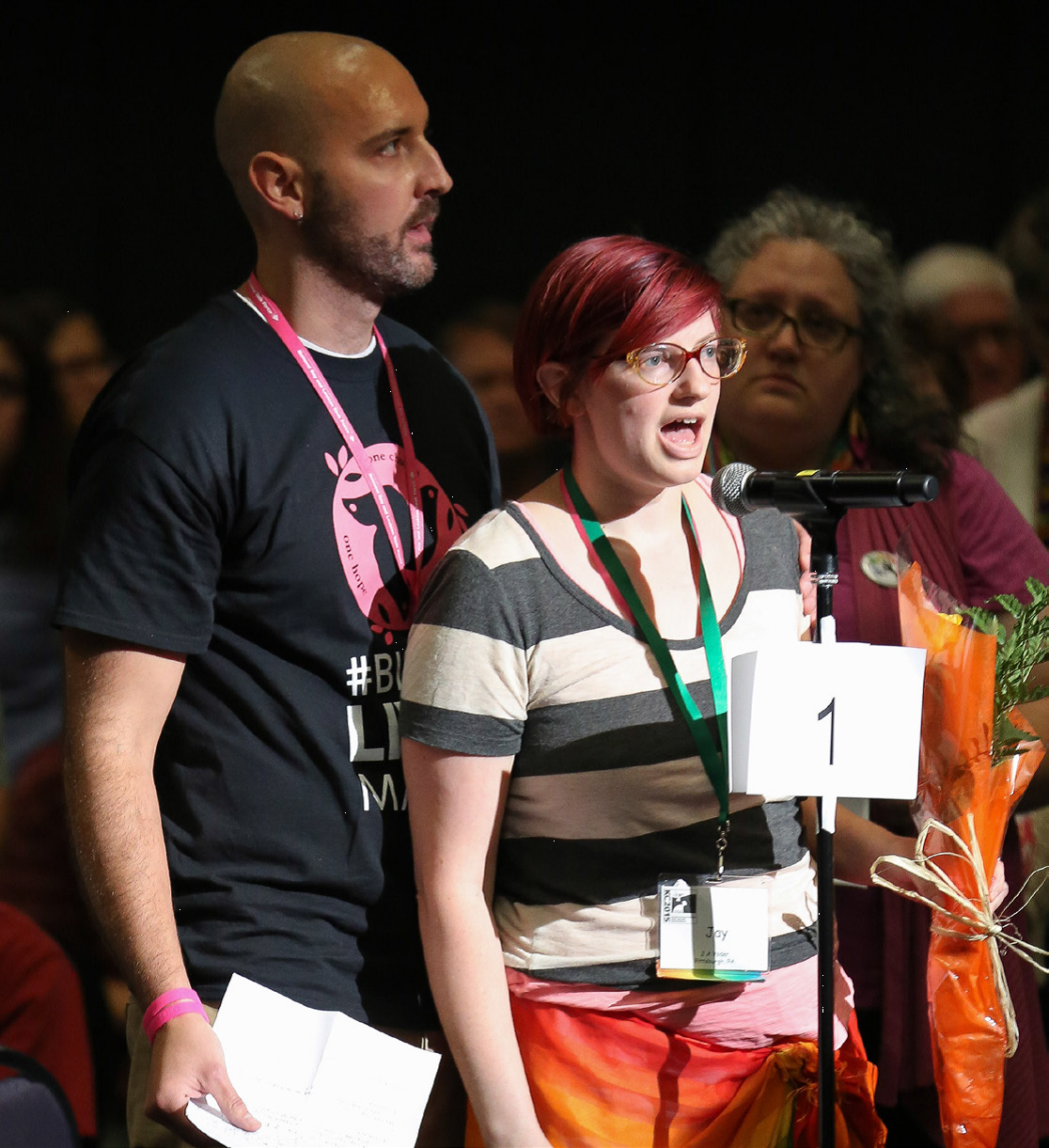 transgender, queer) individuals; they quoted passages from the Confession of Faith in a Mennonite Perspective and offered statements of lament about the exclusion of LGBTQ people from the church.

Pastor Madeline Maldonado, representing Iglesia Menonita Hispana, reported that IMH will begin a discernment process this fall about their continued membership in Mennonite Church USA, and asked for prayer.

Tina Begay, Carmen Horst and Byron Pellecer of the Listening Committee reported on the affirmations and concerns received by delegates throughout the week. Many concerns were procedurally based, they said.

Ewuare Osayande and Elaine Enns of the Anti-Racism Monitoring Team noted that this may have been the “most diverse convention yet” outside of the delegate hall, but that increased representation of people of color among delegates and as writers and presenters of resolutions was needed. Out of more than 800 delegates, less than 10 percent were people of color, they reported.

“Until the delegate session — where voting power lies — looks a bit more like the seminar and learning sessions, no real change will occur in the broader church,” Osayande said.

Patricia Shelly and David Boshart were installed as moderator and moderator-elect for the next two years. Stutzman thanked Soto Albrecht for her service.

“There is much work ahead of us,” she said in closing her two-year term. “We should not let our disagreements drive us apart. We have done peace work in Colombia, Israel, all over the world, but we have not learned to do peace work among ourselves quite yet.”

“There’s a Mennonite church in Amsterdam where there is an open bible [art piece],” he said. “It’s not static; it’s alive, moving, with blank pages coming towards it — that’s us. We’re entering that story. Find new creative ways to live the story of Jesus in this time.”