Executive Board looks toward the future of the church

Note: This report initially appeared in The Mennonite.

KANSAS CITY, Missouri (Mennonite Church USA) — In their penultimate meeting of the biennium, members of the Mennonite Church USA Executive Board (EB) took time March 30-April 1 to reflect on denominational developments over the last two years and to look ahead to new trends that are emerging for the future of the church. 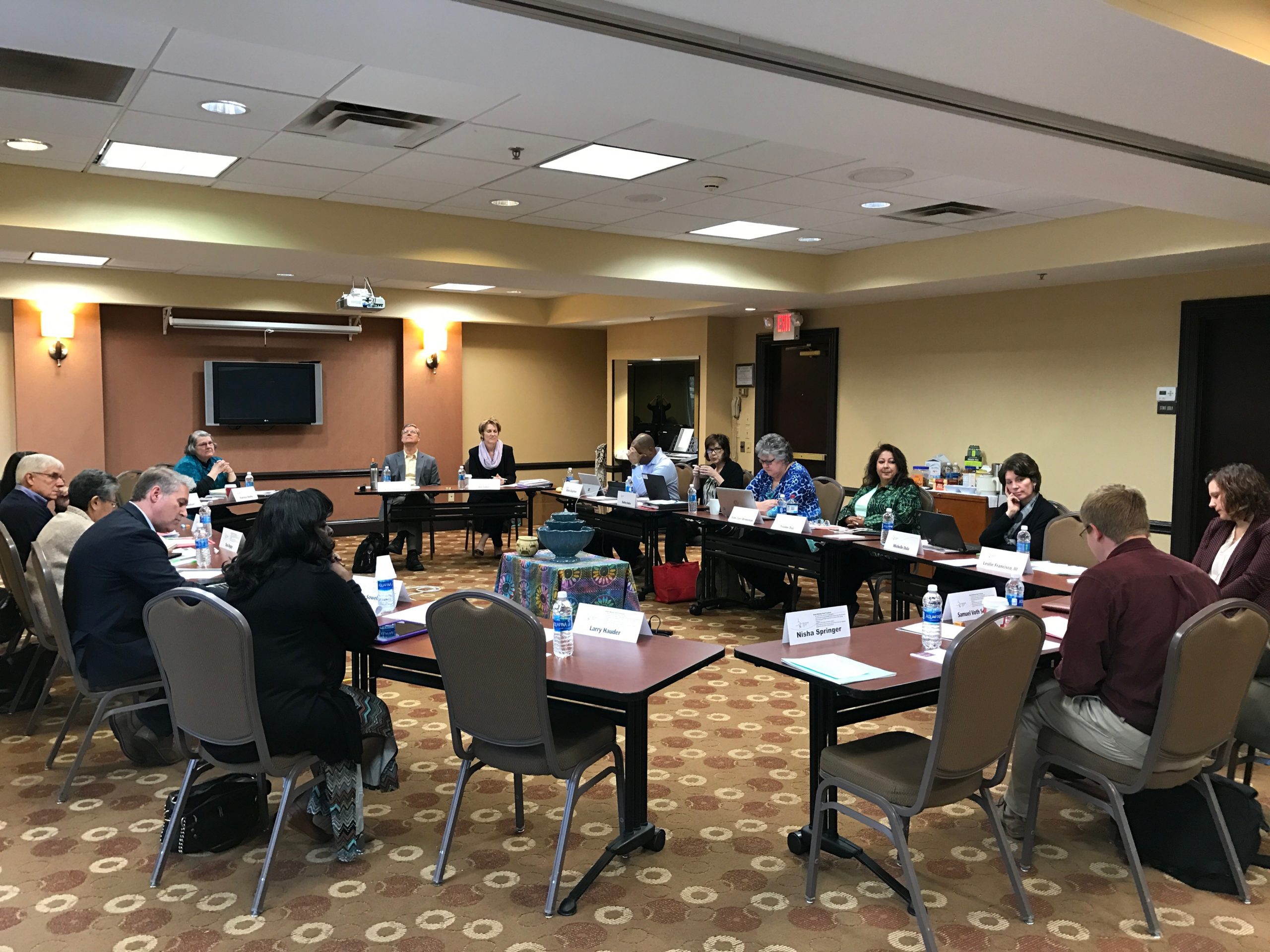 The Mennonite Church USA Executive Board gathered in Kansas City, Missouri, for its spring meetings. Photo by Hannah Heinzekehr.

The board spent time reviewing the “Seeking Peace in Israel-Palestine” resolution. Because of the revised delegate schedule, which prioritizes a large-group visioning process called the Future Church Summit, the Israel-Palestine resolution will be the only churchwide statement considered by delegates during their assembly in Orlando, Florida, this July. At the 2015 Delegate Assembly in Kansas City, delegates approved eight resolutions and voted to table a previous draft of a statement on Israel-Palestine until this year.

A three-person writing team, in consultation with a 10-person reference group, reviewed table comments from the 2015 delegate assembly. The writing committee also talked with both Jewish and Palestinian peacemakers and leaders and took into account more than 80 responses to the resolution’s first draft that were submitted by individuals and groups across Mennonite Church USA.

André Gingerich Stoner, former director of holistic witness for Mennonite Church USA, who is still giving leadership to the development of and education surrounding the resolution, and Jonathan Brenneman, a Mennonite Voluntary Service participant serving with Mennonite Church USA this year to provide education and resourcing about Israel-Palestine, presented the final resolution draft to the board for approval.

Stoner said delegates in Orlando will have the chance to hear from both Jewish and Palestinian partners and will be led in discussion at their table groups by individuals who have been able to participate in Come and See Tours to the Israel/Palestine region or participated in other educational events.

Brenneman noted that delegates at Kansas City expressed both concerns and affirmations for the former resolution, and the writing team tried to keep the strengths of the old resolution while addressing points of concern.

“The resolution affirms two streams of work: that of justice in Israel-Palestine and challenging oppressive Israeli policies and also building connections with [the] Jewish community,” Brenneman said. “Both of these areas of work are important and should be done together. They can co-exist. It takes a humble posture to recognize the webs of violence we are a part of and a restorative justice framework.”

Nisha Springer, board member from Peace Mennonite Church in Dallas, Texas, asked Stoner, “There are so many situations of violence in our world. Why should we respond directly to this one?” 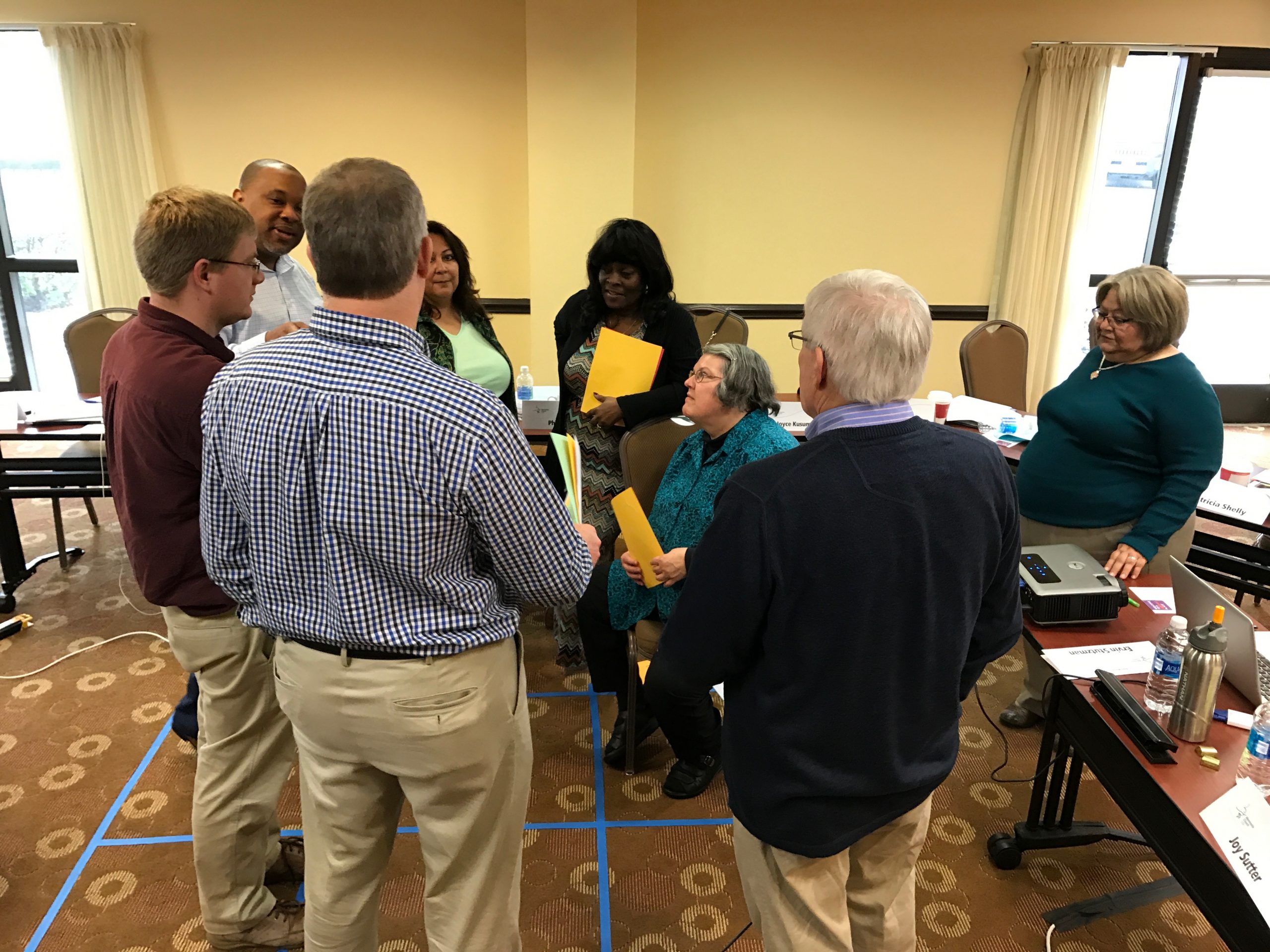 Mennonite Church USA Executive Board members from across the country discussed a variety of issues in Kansas City. Photo by Hannah Heinzekehr.

The EB approved the resolution for consideration by delegates with a vote of 11 in favor and four abstentions.

The EB also heard reflections from the recent gathering of area conference leaders at the Constituency Leaders Council. The group participated in a version of the Future Church Summit (FCS) process as a way of identifying priorities for future CLC work. Based on the process at CLC, the FCS design team is making some small adjustments to the visioning process that will take place in Orlando.

EB members discussed a request from Lancaster Mennonite Conference (LMC) and Mennonite World Conference (MWC). In November 2015, LMC leaders voted to leave Mennonite Church USA but built in a two-year process for transition and for LMC congregations to engage in discernment regarding affiliation. With the end of the two-year process approaching, LMC leaders sent a formal request last September to MWC leaders, asking to join the international body of churches.

MWC’s Executive Committee discussed the request at its February meeting in Augsburg, Germany, and indicated that LMC’s request would be considered after its separation from Mennonite Church USA was completed. MWC did update its membership policies to state that groups need not be a national group or network in order to be considered for membership. The MWC Executive Committee action stated: “We grieve current divisions in the Mennonite church in the United States and affirm all efforts at healing of relationships. MWC seeks to be in relationship with all Anabaptist church bodies. As Lancaster Mennonite Conference formally separates from MC USA, MWC hopes the two bodies can be in a good relationship with each other and both be members of MWC. We affirm the intention of LMC to become a member of MWC.”

In addition, in order for LMC to join MWC, Mennonite Church USA’s Executive Board would need to write a letter of support on behalf of LMC. EB members engaged in a long discussion about the implications of area conferences joining MWC as members. Before writing the letter, EB members passed an action stating they would “arrange for a face-to-face meeting with the leaders of Lancaster Mennonite Conference following their application to MWC before agreeing to write the required letter of support from Mennonite Church USA.” The motion passed with a vote of 11 in favor and four abstentions.

If the EB writes the letter of support, LMC’s application for membership in MWC will be reconsidered at the April 2018 meeting of MWC’s Executive Committee.

In other news, on April 1 the EB was joined by the executive committee of Mennonite Church Canada. 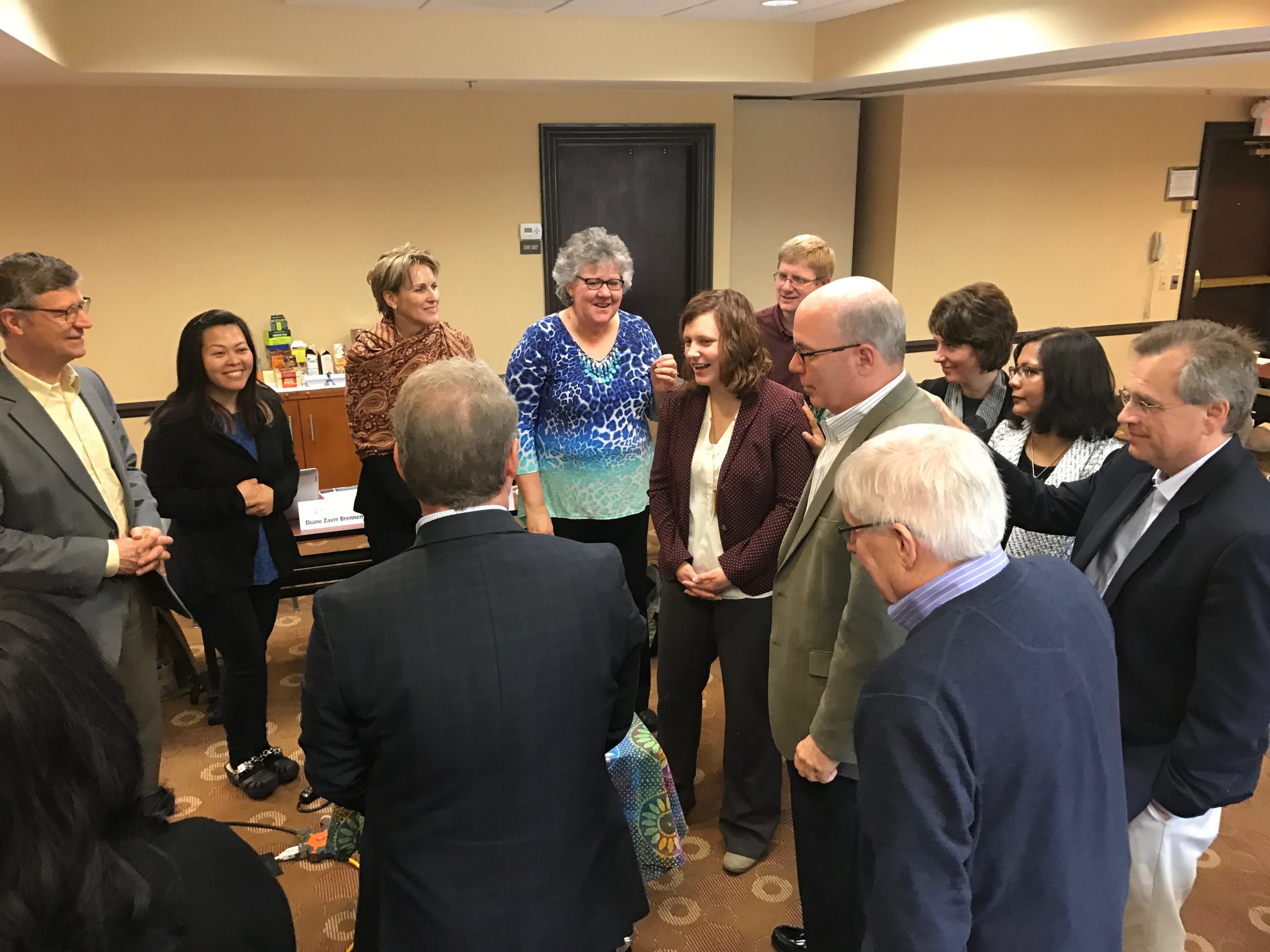 Mennonite Church USA Executive Board members from across the country conversed about a variety of issues during the spring meetings. Photo by Hannah Heinzekehr.

In an opening meditation drawn from 1 Kings 18, when the prophet Elijah cries out in lament, “I am the only one of the Lord’s prophets left,” Mennonite Church Canada Executive Director Willard Metzger reflected on the feelings of many during times of restructuring and reshaping for both Mennonite Church USA and Mennonite Church Canada. He noted that church leaders often fall into two problematic assumptions: First, that “God’s church is fragile,” and second, that “we can fully comprehend everything that is occurring.”

“There are things of which we are not aware, but the one who is fully aware knows, and that is where we place our trust. So we commit ourselves to following God even when we don’t understand what is going on,” said Metzger.

Metzger and Mennonite Church USA Executive Director Ervin Stutzman will work together to make a few updates to the covenant to be affirmed by denominational boards at a later date.

After it spent three years as a “working document,” Mennonite Church Canada’s General Board and the Mennonite Church USA EB approved the updated polity manual for final printing and use. Originally presented to delegates in 2015 as A Shared Understanding for Church Leadership, the manual has now been renamed A Shared Understanding of Ministerial Leadership and is considered the guide for ministerial policies in both denominations.

The document reaffirms Article 19 from the shared Confession of Faith in a Mennonite Perspective and states, “Celibacy is the standard for single persons and a monogamous, heterosexual relationship for married persons.” However, both boards approved the inclusion of a new footnote which states that, while both denominations reaffirmed Article 19 at their recent assemblies, they also have put in place policies that allow for forbearance and a diversity of understandings on same-sex marriage.

The footnote states, “…Both denominations acknowledged that not all agree to this stance and offered forbearance or space for discernment for congregations who may choose a different way. However, before blessing same-sex marriages, such congregations are expected to prayerfully discern God’s will for their situation and to cooperate fully with the policies or guidelines of their Area Churches or Area Conferences.”

Exploring understandings of power and authority

Growing out of conversations with the Racial Ethnic Council (REC) in November 2016, EB members engaged in conversations about the nature of power and authority in Mennonite institutions. During the November meeting, REC leader and EB member Bishop Leslie Francisco noted that one prevailing question for the REC has been, “Can the Executive Board name the points of power that facilitate the work of the church?” Members of the REC noted that the locus of decision-making has not always been clear in Mennonite Church USA structures. 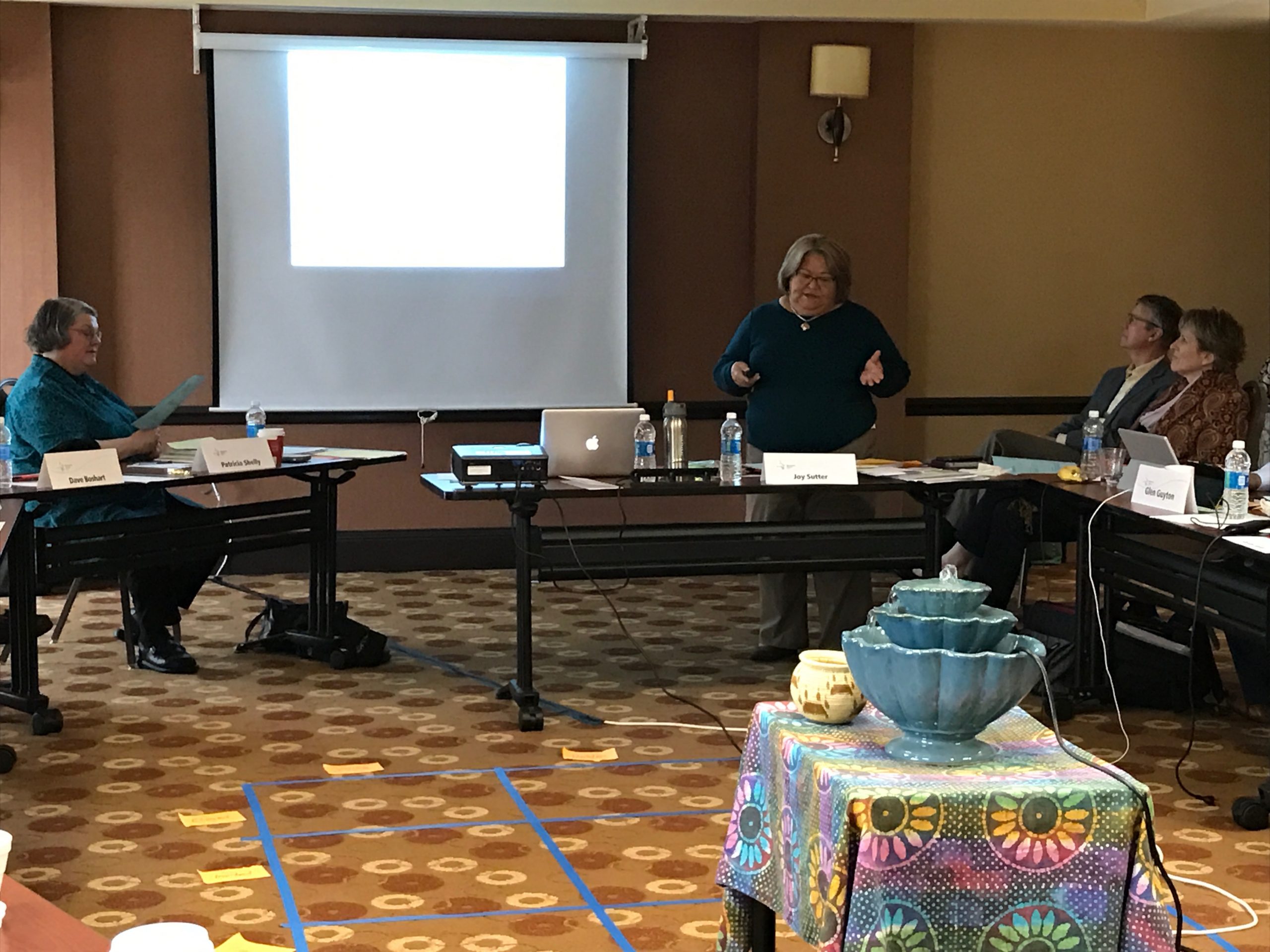 Iris de Leon-Hartshorn leads an exploration on issues of power and authority in the church. Photo by Hannah Heinzekehr.

Iris de León-Hartshorn, Mennonite Church USA Director of Transformative Peacemaking, led the group through an exercise using the “Power Cube,” a three-dimensional tool that helps people analyze the ways power operates in a variety of situations.

Using a variety of scenarios, de León-Hartshorn invited participants to explore both the forms of power and the spaces where power operates.

In addition, a task force focusing on power and authority in Mennonite Church USA presented the group with several worksheets that explored the nature of the power held by different groups across the denomination.

The EB’s Anti-Racism Committee expressed appreciation for the ongoing board development focusing on anti-oppression principles and noted that continuing these trainings will be important in the future.

Note: During its meetings, the Executive Board also reviewed reports from the executive directors and board chairs of MennoMedia and The Mennonite, Inc. These reviews were part of a standard four-year review cycle, and the reports from both agencies were discussed at length and accepted by the EB. Since staff from The Mennonite, Inc. participated in this review, we are not able to report objectively on that piece of the meetings.