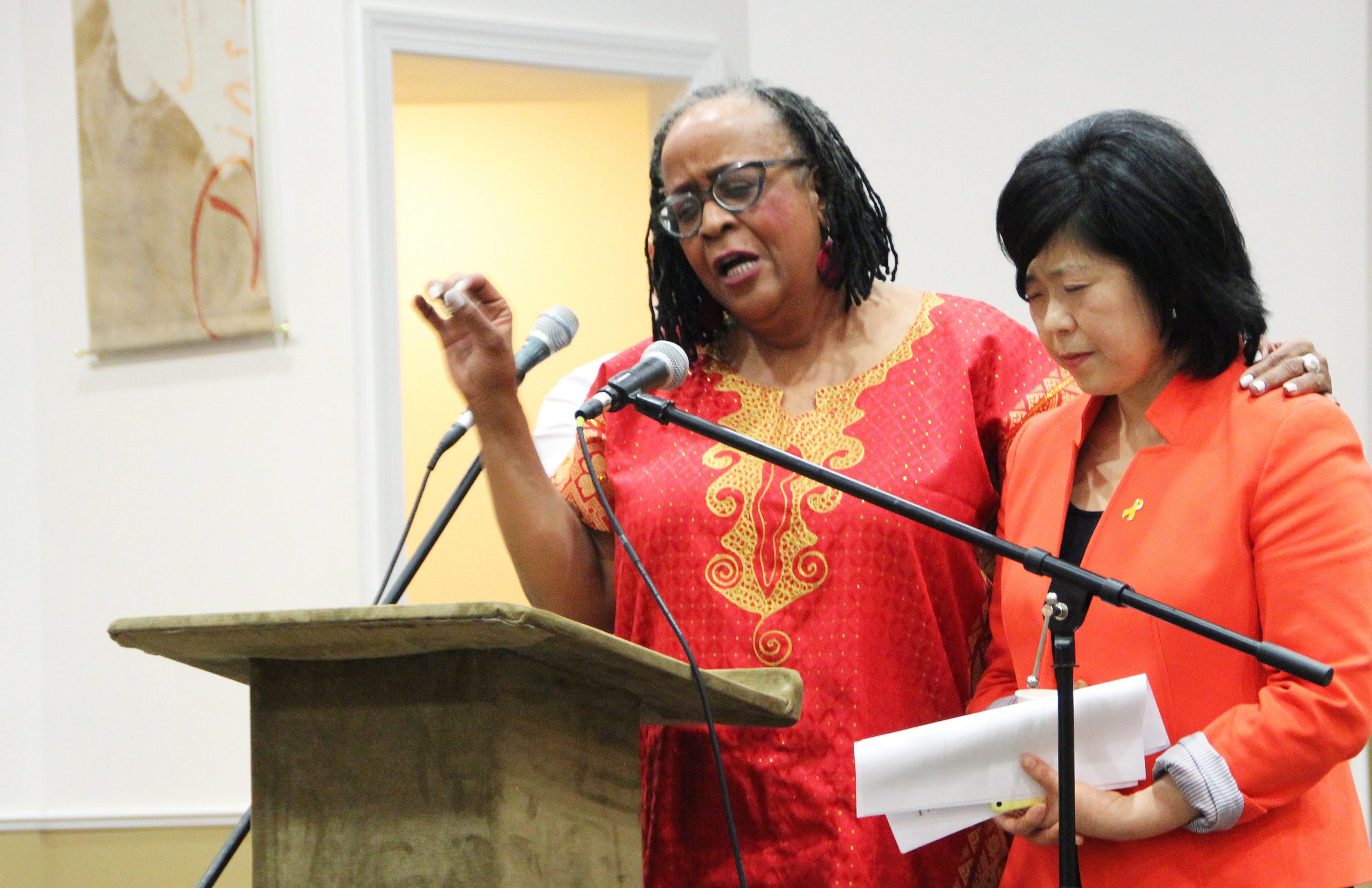 Michelle Armster, the interim executive director of Mennonite Central Committee Central States, prays over Sue Park-Hur, who preached the closing sermon on Sunday at Hope for the Future. (Photo by Andrew Bodden)

Fort Myers, Fla. (Mennonite Mission Network/Mennonite Church USA/Mennonite Education Agency)—Obviously, a leader who has power could abuse it at work, school or church. What’s less obvious is that any person can have the power to affect change, yet not realize it.

Understanding how power works across Mennonite institutions was the theme of “Hope for the Future IV,” which took place Jan. 23–24, 2015, at Iglesia Menonita Arca de Salvación in Fort Myers, Fla.

Planners expressed appreciation to all the institutions for their commitment and support. Everence, the Goshen (Ind.) College Center for Intercultural and International Education, Mennonite Central Committee U.S., Mennonite Church USA, Mennonite Education Agency, and Mennonite Mission Network sponsor the event, which gathers particularly people of color who are in leadership positions across the church. Participants work together to address racism to help the Mennonite Church embrace diversity, so that it can thrive amid the racial and ethnic demographic changes that are occurring churchwide.

This year’s gathering of more than 100 participants was the largest of the previous three annual meetings. The gathering also invited for the first time Latino, Black, Native American, and Asian young adults from all Mennonite colleges and universities to empower them to be agents of positive change. Fourteen students from Hesston (Kan.) College, Goshen College, and Eastern Mennonite University in Harrisonburg, Va., participated.

Christian Parks, a senior at Eastern Mennonite University, expressed excitement to “sit down with people who have been where I’m trying to go” and to learn from them. Parks said that as a first-generation African American Mennonite from Philadelphia, it felt great to be around so many other people of color, since dealing with racial isolation has been a common church experience.

“… They’ve made mistakes and they’ve made strides, so what does it look like for them to be my Elijah—me sitting down with them and saying, ‘I want your blessing and I want double of it,’” Parks said.

Among the 26 White participants at the gathering were key leaders of Mennonite institutions, including all Mennonite Church USA agencies. Loren Swartzendruber, president of Eastern Mennonite University, said he was unable to attend in 2014, when Whites were invited to the gathering for the first time.

“I heard positive things from the report from last year, so I was looking forward to being here,” Swartzendruber said. “It’s been a great experience.”

The gathering consisted primarily of structured work sessions. Informal sharing also occurred during karaoke and bowling nights and meal breaks, as participants dined on delicious Latino cuisine prepared by Iglesia Menonita Arca de Salvación staff. They concluded with a recap of what they learned over the weekend and with preliminary recommendations of what next year’s gathering should focus upon.

Participants first gathered in separate rooms of small caucus groups for people of color, Whites, and college students. The caucus groups allowed for safe, unfiltered talk about racism, its effects, and its influence on hopes and fears regarding change. They reviewed and discussed the evolution of racial reconciliation efforts in the Mennonite Church that launched Hope for the Future in 2011. Then participants moved to one large room and divided into mixed six-member table groups. They analyzed case studies about how power is used or misused based on racial, ethnic and gender stereotypes and perceptions. Participants wrestled with scenarios based on situations that often occur in real life.

For example, what happens if a White employee and a Black employee are accused individually of the same crime at work, but are treated differently? Their White supervisor appears to be more willing to give the White employee the benefit of the doubt. Why? Power resides not only in the supervisor’s authoritative position, but also in perceptions based on race and culture.

Power can be hidden. A person who does not hold an official position in a congregation could still sway leadership decisions perhaps because of his or her financial wealth. Publicly, decisions could appear to be made by majority consensus, while they’re actually happening after a private meeting.

Power can also be visible, but not always clear. A seminary professor could unknowingly make a culturally offensive remark to a student, but the student could feel powerless to address it. This might particularly be the case for an Asian student from a culture where questioning authority is frowned upon. The student could become less frustrated after realizing that he or she possessed the power to speak to the professor directly and that the remark was an honest mistake.

The table groups used Power Cube, an analysis tool that helps users determine where power truly is in a given situation, and how it can be shared.

“The planners hoped to create a setting for open and honest conversations about power, an area that many times in the church we never talk about or want to address,” said Carlos Romero, executive director of Mennonite Education Agency and one of the gathering’s planners. “I am not aware of any other place in the denomination in which we had such open and honest conversations about power as we did at the conference.”

Another complex intercultural issue that emerged often during informal discussions in the hallways and at meal breaks is the belief among many people of color that “cultural acceptance” actually means that people of color must learn White culture, but that Whites do not believe they should reciprocate. An outgrowth of this is the perceived distinction between “Mennonite the culture” and “Anabaptism the theology.”

People of color tend to identify more as Anabaptists rather than Mennonite. Mennonite church growth is occurring most among people of color in Africa and South America, while declining among Whites in Europe and North America. Identifying with the persecution and marginalization that early Mennonites in Europe endured during the 1500s, most people of color are drawn to the modern church because of its Anabaptist emphasis on following Jesus’ way of peace and justice. For example, many African Americans agree that Anabaptism fits neatly with their civil rights movement tradition of nonviolent direct action and resistance.

People of color desire to express Anabaptist theology within their own cultural contexts, while experiencing other cultures on equal terms. Many of them view being “Mennonite” as a White cultural expression of Swiss German and Russian heritage that they can celebrate, but that they should not be made to conform to. This tension often emerges during worship services, where music illustrates the unique and intimate cultural expression of a people. Mennonites are well-known for a cappella four-part harmony hymns in English or German. In contrast, for example, worship at Iglesia Menonita Arca de Salvación involves a fusion of Latin and rock music with multiple instruments—including drums. Contemporary singers praise God in Spanish and English.

This cultural complexity also emerges when hiring people to work for Mennonite institutions. A panel discussion of human resource representatives from Mennonite Mission Network, Everence, Goshen College, Mennonite Central Committee U.S., Mennonite Health Services, MennoMedia, and Hesston College became visibly uncomfortable for some as their candidate outreach efforts were criticized. Though jobs are posted on institutional websites, many hirings occur by way of networking and word-of-mouth recommendations from institutional insiders who are usually White.

As new congregations that are predominantly people of color join the fold, they often bring with them potential employees for Mennonite institutions. However, the human resource representatives expressed being challenged by how to adjust recruitment efforts to reach these potential “candidates of color.” They asked the audience for help in navigating communication with these new congregations, where the correct person to contact or ideal communication method may differ from more established churches.

Before and after work sessions, participants also worshiped together.

Drew Hart, a doctoral candidate at Lutheran Theological Seminary in Philadelphia, gave a sermon on “radical unity,” challenging White Christians to embrace people of color as brothers and sisters on equal terms, rather than requiring them to conform to a White Western view of Jesus.

Gilberto Perez, Jr., senior director of intercultural development for Goshen College, encouraged the group to be “gap people”—individuals who willingly bring God’s love to those who are suffering. Sue Park-Hur, co-director of ReconciliAsian, gave the concluding Sunday worship sermon on the topic, “Seeing in the Light.” Among her points, Park-Hur said that discipleship is the movement from “looking to seeing.” Jesus releases us, sets us free, and helps us to see the worth and beauty of the people God has created.