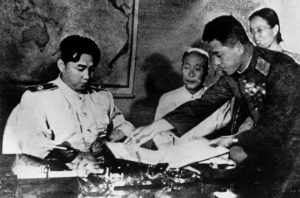 One hundred Korean American Christians signed a statement expressing lament for over 70 years of division between North Korea and South Korea and calling for Christians to participate in peace and reconciliation on the peninsula. Nine Korean American faith leaders – Peter Cha, Eugene Cho, Grace Choi, Hyun Hur, Grace Ji-Sun Kim, Jongdae Kim, Sue Park-Hur, Soong-Chan Rah, and Stephen Yoon – drafted the statement in recognition of the 70th anniversary of the beginning of the Korean War.

While a ceasefire on July 27, 1953 brought an end to active fighting in the Korean War, the United States and the two Koreas never signed a formal peace treaty declaring an end to the war, leading to hostility and tension that continue today. As a result, the statement notes: “The continuing divide between North and South Korea is now the longest unresolved separation of a people in modern history.”

“War is not just our past. The war never officially ended and the ongoing trauma continues to have its wounding impact on the Korean Peninsula and the Korean diaspora,” said Rev. Sue Park-Hur, denominational minister for Transformative Peacemaking for Mennonite Church USA and one of the co-drafters of the statement, “If we as Christians truly embrace that we are called to the ministry of reconciliation, we have a concrete opportunity here and now to help carve paths for reconciliation in land that has been brutally ravaged and divided for over 70 years.”

“This is a global justice issue,” said Soong-Chan Rah, author and professor at North Park Theological Seminary. “Many Korean American Christians are actively involved in the work of racial justice in the United States — as we participate in that important work, we should not forget the need for reconciliation that is part of our own heritage and story.”

Drafters of the statement believe that Christians have a unique perspective in addressing the Korean divide. “We believe our deepest motivation to engage the Korean divide as followers of Christ is not political or economic,” the statement reads, “but as peacemakers and agents of reconciliation, following Jesus’ costly way of the cross – of discipleship, forgiveness, and justice which restores broken relationships.”

More than 90 additional faith leaders, many with deep connections to Korea, also signed the statement in solidarity.

“For American Christians, the Korean War is a forgotten war, but for the Korean people it is unforgettable,” said Chris Rice, director of Mennonite Central Committee’s UN office, who spent five years working on both sides of the Korea divide. “Given the long legacy of American missionaries and military on the Korean peninsula, the American church has a responsibility to stand in solidarity with the drafters of this statement.”

The statement includes words of lament, but also hope for a day when this reconciliation is achieved.

“We believe that God is faithful, and that the arc of the universe in God’s victory in Christ bends toward justice, reconciliation, and beloved community,” the statement reads, “We pray that someday all Korean people will be able to return to the birthplaces of their ancestors, to meet face-to-face across the peninsula, and to recognize each other as sisters, brothers and image-bearers of God.”