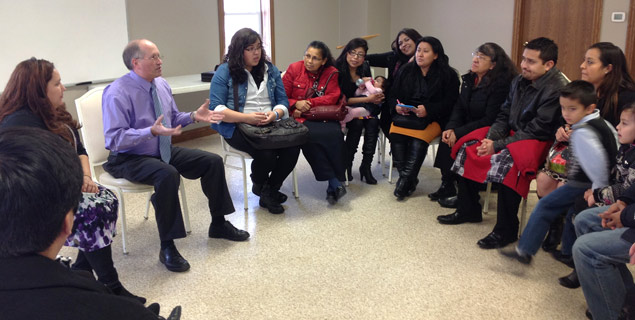 At a Learning to Undo Racism Event, Gilberto Pérez, Jr., Mennonite college administrator and owner of a consulting business, shares about building relationships despite mutual fear and distrust.

ELKHART, Indiana (Mennonite Mission Network/Mennonite Church USA) – Not only does Gilberto Pérez, Jr. bring Jesus’ message, he uses Jesus’ methods of communication – surprise, humor, unexpected gifts, questions, and the realization that “on earth as it is heaven” can begin right now where we are, through listening and sharing food.

Sept. 17, Pérez walked into a Learning to Undo Racism Event (LURE) at the Elkhart office of Mennonite Church USA with an enormous bag of sandwiches. The quantity may not have been sufficient to feed 5,000 people, but there was certainly enough to satisfy the hunger of those in the audience of 50 staff persons, who may have forgotten their lunches. 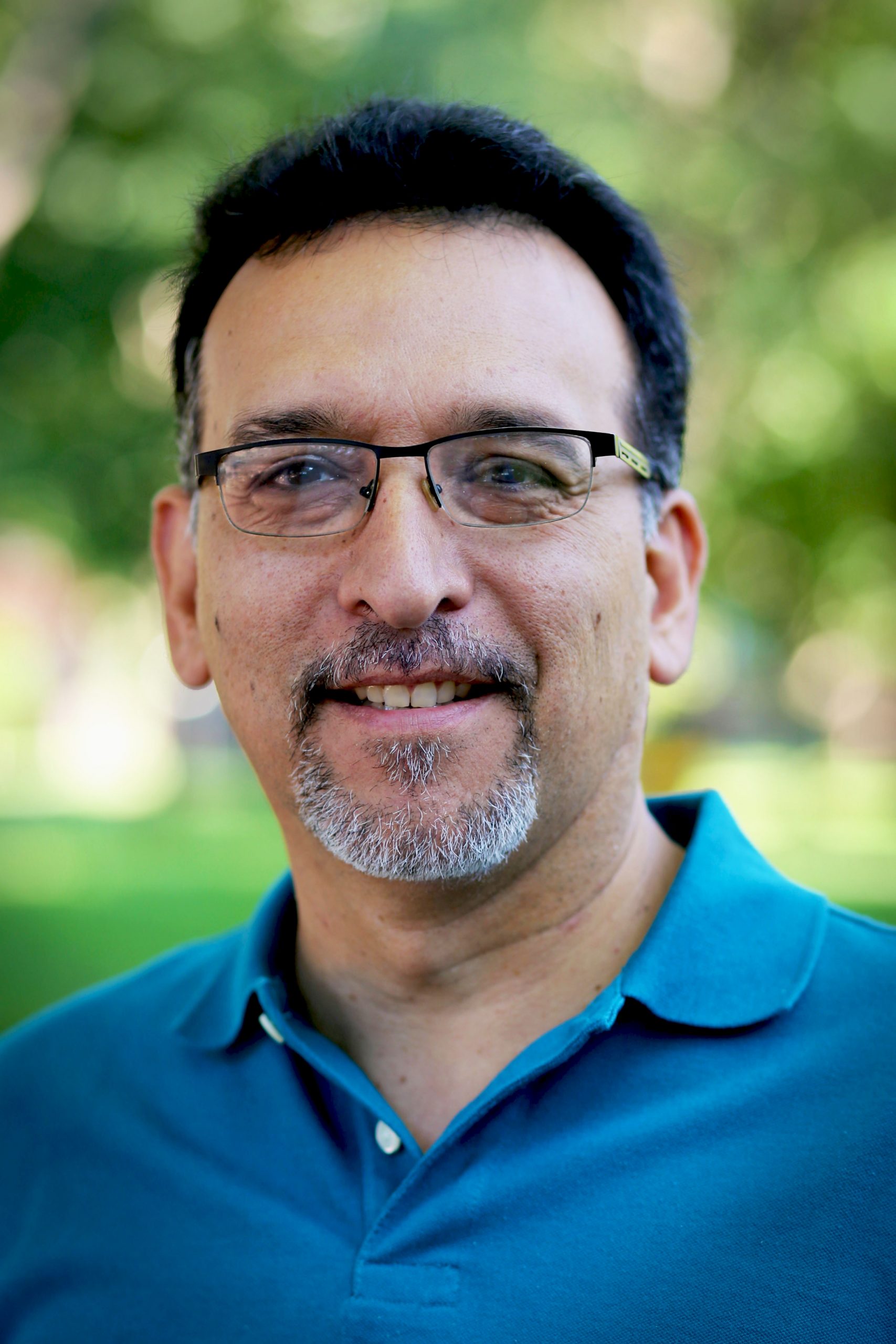 Pérez is president and CEO of Bienvenido (Welcome) Community Solutions and senior director of Intercultural Development and Educational Partnerships at Goshen (Indiana) College. LURE seeks to encourage the six Mennonite Church agencies and organizations that share office space in Elkhart, Indiana, to engage in intercultural transformation through monthly events during the noon hour. These events shed light on systemic and personal racism, present a fuller vision of what God intends the church to be, and then suggest ways to put these insights into practice.

Pérez gave an interactive presentation about how he has encouraged communication between law enforcement officers and the Latino community in northern Indiana and generated animated discussion during role-plays and the question-and-answer time.

Pérez opened a local newspaper and read aloud the names in the police reports, a list of mostly Spanish surnames in a much higher percentage than the 33-percent Latino population in the area.

“The majority of these offenses are driving without an operator’s license. How does the arresting officer know?” Pérez asked.

Pérez’s response to that question was to begin talking with Wade Branson, Goshen’s police chief. Pérez wanted to see the humanity of those who serve his community. Pérez asked God’s Spirit to guide him in these conversations. After 18 months of building this relationship, Pérez invited the police chief to lunch at a local soda shop to ask about what he was seeing in the daily newspapers.

Branson said, “How can I learn what Latinos are experiencing? What can we do to fix this?”

Branson agreed to be present at a meeting that included two Latino pastors (Assemblies of God and Mennonite), an Anglo Mennonite pastor and a Catholic priest. This diverse group talked and listened to each other.

The clergy requested that law enforcement officers come to their congregations to explain policing protocols in Goshen. Pérez submitted a proposal to the city’s Community Relations Commission for support in convening the meetings. Some meetings had more than 150 participants, including the county sheriff and Goshen’s mayor.

The Latinos at the meetings talked about how they felt targeted, and the law enforcement officers shared their policing process. They learned from each other. Pérez also learned about how to make the communication process more helpful.

“We started with the panel concept, but that was too much us versus them,” Pérez said. “We moved the conversation to small circle groups.”

After a year of talking together, the language of many Latino participants had shifted slightly to indicate that they now saw themselves having more ownership in the community.

“Latinos were now asking questions about services the city offers, and talking about how they experience life in their neighborhoods,” Pérez said.

A Latino man confessed that he had failed to pray enough for police officers. Before the meeting ended, the law enforcement officers were invited to the center of the circle, and participants prayed for them with outstretched hands.

“It was just a little transformation; I don’t want to make it sound more impressive than it was,” Pérez said. “Nothing magical happened. But the [law enforcement] practice has changed, and there is an openness to sit and talk. It all starts with relationship.”

In a recent community presentation, Police Chief Branson said that more Latinos are coming to report crimes and ask questions.

“We didn’t see too much of this before our meetings with Latino congregations,” Branson said.

Pérez concluded by extending an urgent invitation to the Mennonite Offices staff to create an environment where such break-through moments can occur, and to stand on a threshold that enables understanding of both sides of a situation and embraces diversity to create a new community.

“And, now, I press you as my people, to invite the sheriff to break bread and enter the liminal space, where the things are seen differently. So often we Anabaptists don’t come with questions, but only our passion,” Pérez said.

Pérez, Branson and Goshen’s mayor, Allan Kauffman, took their message of relationship-building and reconciliation to the Indiana Association of Cities and Towns on Sept. 30. Here, they offered their story of creating space for community conversations to their fellow Indiana mayors and city council members.