Love is a Verb: Harlem pastor embarks on NYC to Chicago prayer walk 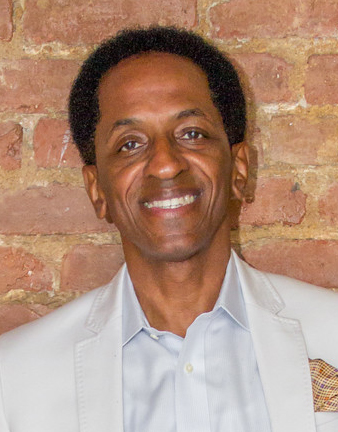 (Mennonite Church USA) — On Aug. 7, Reverend Al Taylor of Infinity Mennonite Church in Harlem, New York, will head west, on foot, towards Paterson, New Jersey. It’s a 20-mile trek from his starting point in Manhattan, but just the first leg of a 34-day prayer walk from New York City to Chicago.

Taylor’s project, called “It’s a Love Thing,” will span seven states and 780 miles, aiming to offer a message of hope and unity and catalyze change in troubled times.

“This is a walk about what can happen,” says Taylor. Amidst differences and in the face of violence and unrest, he insists, “we can walk arm in arm.”

Taylor hopes to carry — and to encounter — God’s spirit of love across hundreds of miles of American streets. Although he still doesn’t know where he’ll sleep, whom he’ll meet, and what kind of support he’ll receive along the way, he has already found reasons to be hopeful.

While driving a stretch of his proposed route through Pennsylvania on a trip to plan the walk, Taylor passed a White state policeman. He felt an aversion, an instinct to move along as quickly as possible, but at the same time, “God was tugging on my heart.” So Taylor turned around and cautiously approached the officer.

“I introduced myself, slowly. I said I wanted to do a prayer walk. Fifteen minutes later he had my map open on the back of the car, helping me choose a smarter route,” Taylor recalls. “He was a believer, and he said, ‘When you come back through here, we’re going to walk with you, pray with you; people are going to open their houses to you.’ He didn’t know me, but the love of Jesus was between us. That gave me hope, and that’s what this journey is about.”

Called to a ministry of walking

Taylor has been pastor of Infinity Mennonite since 2008, when, hoping to plant a church in Harlem, he was instead invited to lead this Mennonite congregation in the neighborhood. Having no previous connections with Mennonites, Taylor was uncertain about the fit. 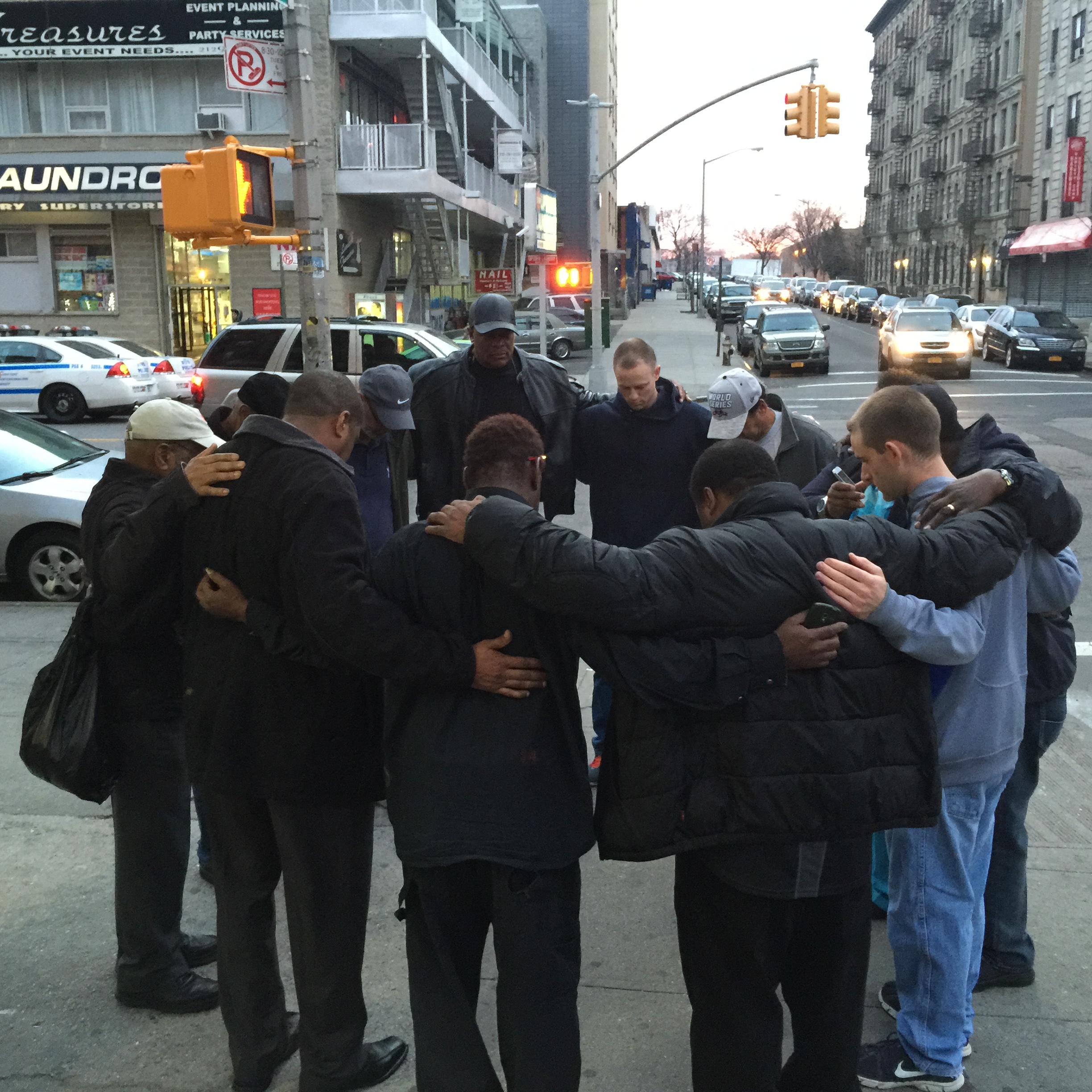 Participants gather for a Man Up In Harlem morning prayer gathering. The gatherings are held on Thursdays from 6 to 7 a.m. (Photo provided)

But Taylor was surprised to find that the congregation encouraged his passions for sharing the gospel in the Harlem community.

“I’m an evangelist by nature,” he says, emphasizing that affiliating with Infinity Mennonite has stretched him and deepened his Christian walk profoundly. “One of the greatest things that has happened to me in my life has been to identify with the Anabaptist movement.”

Taylor had become convinced of the power of prayer and the transformative ministry of walking two years before joining the Harlem congregation, however. Across the river in the Bronx, along with Pastor Dimas Salaberrios and other area ministers, Taylor helped initiate an early morning men’s prayer group that soon blossomed into a walking ministry in and around the Bronx River Housing Projects.

“I thought a 5:30 a.m. prayer group would never work, but it became such a phenomenon,” he recalls. “We got all kinds of guys. Guys who go to church, guys who don’t, guys who just got out of jail. When you’re walking and praying and brothers are snot-nose crying, you know that the power of God is there.”

In 2008, troubled by a series of murders in the Polo Grounds housing projects, Taylor took the walking ministry model home to Harlem. Known as Man Up In Harlem, “a ministry by and for men,” the weekly prayer walks have expanded to 11 locations and attracted participants from across NYC and beyond.

“God is transforming these communities,” says Taylor. “Violence and crime have been reduced, not because we’re telling people to put down their guns, but by the power of prayer. We’ve seen the transformation happening, and those housing projects are much better places to live now.”

Local law enforcement also took notice, as murder rates in the Polo Grounds plummeted — to zero — after Man Up began prayer walks. Taylor says the ministry is now given special license to assemble in the streets, for example, to host vigils and mourning services after deaths in nearby communities.

Taylor believes the walking ministry is a source of hope, even as it “holds our own community accountable” for black-on-black crime. That, in turn, has helped to hold law enforcement accountable to the community, and to slowly change strained relations between the community and the New York Police Department.

“As a young man, I believed that cops were in my neighborhood not to serve and protect, but to brutalize,” Taylor says. “But God is love — God gave me grace — so why can’t I give grace to others?”

“Doing nothing is not an option”

Taylor says he hopes “It’s a Love Thing” will inspire people to confront violence of all kinds in their neighborhoods, from hate crimes or drug violence to domestic violence and cyber bullying.

“Violence in any community is unacceptable,” he asserts.

He also knows, in the face of so much visible and invisible violence, and amidst such apparent political and racial polarization, that a prayer walk may seem rather inadequate.

“When we started Man Up In Harlem, people laughed at us and said it wasn’t going to work,” he recalls. But Taylor is encouraged by the success of Man Up, and, anyway, God has been tugging on his heart.

“Doing nothing is not an option,” he states. The power of a prayer walk, he maintains, is that it invites the transformative power of God. “I know that prayer can change the lives of people. God can bring something great out of these communities.”

Trusting God and anticipating the grace of strangers

Taylor’s daily itinerary is posted on the “It’s a Love Thing” website (http://www.itsalovethingprayerwalk.com/). Each day of his journey will start with prayer from 6 to 7 a.m. and end with prayer at 7 p.m. He plans to walk approximately 20–25 miles per day and 140–175 miles per week.

He has stops planned in four cities in New Jersey, 14 in Pennsylvania, nine in Ohio, two in Michigan, and six in Indiana before he arrives in Chicago on Sept. 9. His itinerary includes major cities like Cleveland and Detroit; smaller urban communities like Elkhart, Indiana; and rural hamlets like Millheim, Pennsylvania.

But with a current budget of less than $1,000, no hotel reservations, no support car, and almost 800 miles to cross, Taylor expects to start “It’s a Love Thing” with a lot of boxes unchecked.

“Sometimes I think this thing is looking raggedy,” he admits. Still, he feels called to walk. “I can think about what’s not in place, but a big part of this is trusting God.”

Taylor also sees “It’s a Love Thing” as a personal pilgrimage — a walk of faith through the long string of neighborhoods that make up America. He can’t guess how he’ll be changed, but he believes in the power of prayerful encounter and in the things that unite us.

“I hope people will come out and walk with me where they can,” he says. “I want to pray for, be prayed for, laugh with, cry with, break bread with.”

“I know we are collectively better than what we see on the evening news or hear in so many sound bites; I don’t think there really is this great divide,” he continues. His conviction is born of ministerial experience in some of America’s most notorious public housing projects.

For his part, Taylor believes he can witness to the power of God to transform lives and communities. He’s seen that power in his own neighborhoods and wants to leave people with a sense of the possibility of solidarity and healing amidst division and violence.

“The only thing that matters in the end is what we do for Christ,” he says.

Man_Up_In_Harlem_weekly_morning_prayer_gathering.jpg
Participants gather for a Man Up In Harlem morning prayer gathering. The gatherings are held on Thursdays from 6 to 7 a.m. (Photo provided)