Love is a Verb: Loving the ‘least of these’ from the border to Goshen 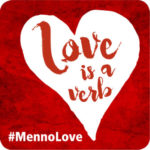 GOSHEN, Indiana (Mennonite Church USA) — Last summer Julia Schmidt took a trip that changed the way she sees the world. Traveling on a learning tour with Mennonite Central Committee (MCC) and later walking the “Migrant Trail,” Schmidt spent two weeks in the United States-Mexico border region, seeking to understand some of the issues that immigrants face. 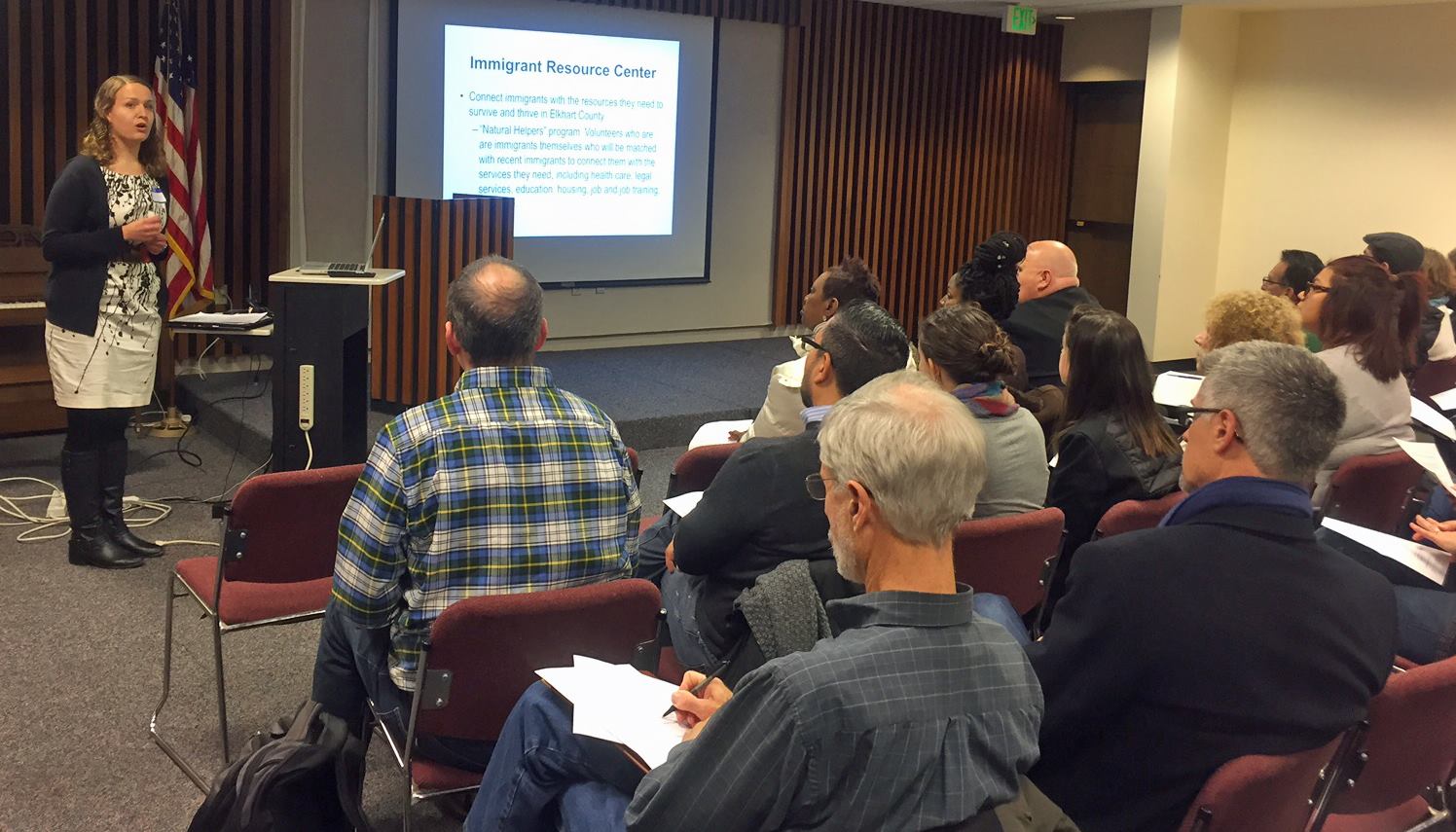 After doing some educational sessions with MCC along the border, she joined a group of about 70 people who walked the Migrant Trail, a 75-mile walk through the harsh desert from the border to Tucson that many undocumented immigrants make as they seek a better life. Waking up early to avoid heat that would eventually climb to 120 degrees, the group trekked through the mesquite-dotted terrain in a contemplative spirit.

Schmidt, a student at Anabaptist Mennonite Biblical Seminary, began wondering what she could do to help immigrants back home in northern Indiana.

“To be there was really powerful,” Schmidt says. “We spent half that time in the desert in silence. You had plenty of time to think while you were just walking for hours. I began to think, ‘Wow. This is something I could do. Welcome the strangers in our midst.’ That’s where my idea was kind of born.”

Her idea: to create an immigrant resource center in Goshen, a place where the immigrant community could come for hospitality, resources and connections.

“Those people I heard about in the desert are coming here,” Schmidt says. “We talked about seeing them not just as victims but as heroes — people society has cast off, and somehow they have the strength to dream and make this journey north. They carry these incredible gifts, incredible strength. How do we be sure that we welcome them and are able to use their gifts, too?”

Schmidt calls herself “very Mennonite.” She grew up as the daughter of two Mennonite pastors, first in Kansas and later in Ohio and Indiana. She then attended Eastern Mennonite University (EMU) in Virginia and eventually settled in Goshen, a city whose population is approximately 30 percent Latino. Wherever she has been, the values she learned in the Mennonite Church have shaped the way she looks at the world around her.

“I knew from a young age I wanted to go into peace work,” Schmidt says. “Reading the Bible, we would talk about loving your enemies and the least of these. That’s what was emphasized, so that’s how I saw my faith. Faith in action has always been really essential to me.”

At EMU she studied history, peacebuilding and pre-law and participated in the Ministry Inquiry Program to explore her call. She didn’t want to be a pastor, but she did want to work with the church in some form. She ended up in San Antonio and spent part of her time with an immigration law firm, which sparked her interest in the issues immigrants face. After a year abroad in voluntary service, she enrolled at AMBS and has felt her call deepen. 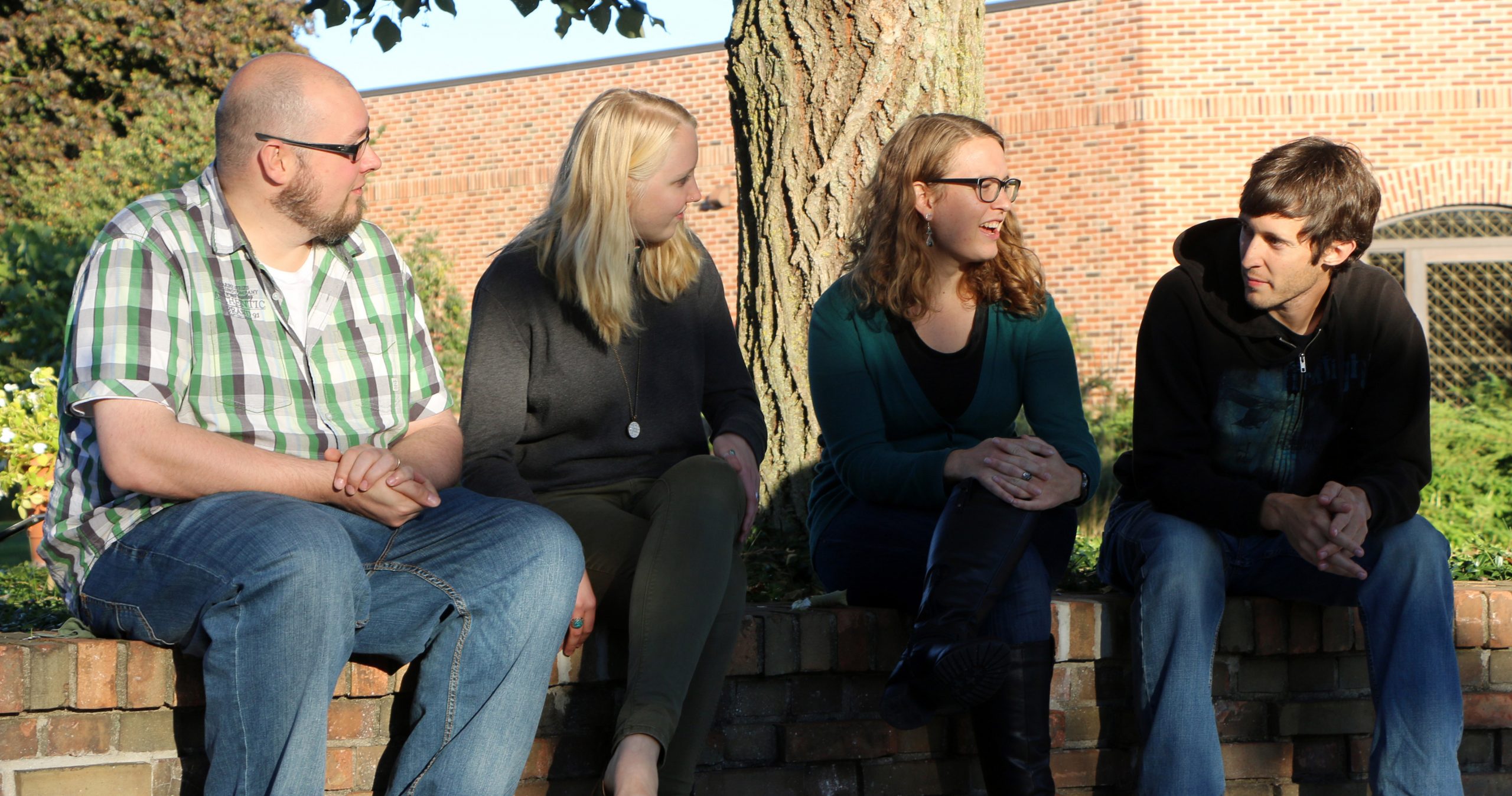 She planned her trip last summer as part of an independent study with AMBS, and she is now doing an internship with MCC Great Lakes to build a framework for her dream. She has already gathered some public input, and now professors and students at Goshen College are helping her to develop surveys and take them into the local immigrant community this spring.

“We want to know what the actual needs are,” Schmidt says. “Hopefully if we have solid research we can come up with a business plan and start grant-writing and raising support.”

She has also done a 40-hour training in immigration law and had conversations with the National Immigrant Justice Center, which handles many asylum cases for those who are well below the poverty line.

“They said a lot of their clients will come in for their casework, but they just need basic food and housing and don’t know where to go,” Schmidt says. “When you’re new to the community and there’s a lot of trauma and language barriers it’s difficult. Here in this county there is a really good booklet of resources available and a network you can call, but if you’re new you don’t know how to do that.”

Thus her vision is to have a one-stop physical space where immigrants new to the area can come and be connected with the resources in the area. In November, Schmidt visited an immigrant welcome center in Indianapolis that she calls “an incredible model,” providing a framework from which to start. Even before an actual center can open its doors, Schmidt plans to work on education and helping to fill in gaps in the resources provided.

And if all that isn’t enough to go with her full-time seminary studies and multiple part-time jobs, she is also working with area churches (including the Southside Fellowship Mennonite congregation in Elkhart, where she attends) to form a coalition as part of the National Sanctuary Movement, providing a safe space for undocumented immigrants and to counter the fear so prevalent in many areas of the country.

She hopes that despite the polarized atmosphere more people in the church will join in the work of helping “the stranger in our midst.”

“I read texts about immigration in the Bible, and everywhere it talked about loving the stranger, and the Old Testament laws are all about showing hospitality to the stranger,” Schmidt says. “The biblical calling is just so clear. There are other issues in the church where I can understand how we can argue them theologically, but I don’t understand with this.”