Love is a Verb: A ‘Sacred Space’ to address mental illness

HARRISONBURG, Virginia (Mennonite Church USA) — Mennonite actor and writer Ted Swartz performs in a variety of shows across the country each year. “Laughter is Sacred Space,” though, is a particular act of love.

Swartz wrote the play after his long-time acting partner and “comedic soulmate,” Lee Eshleman, took his own life in May 2007 following a lengthy battle with bipolar illness and depression. Swartz developed the script over the next few years to deal with his own anguished grief and professional loss as well as to provide a tribute to his friend—a blend of theater and personal storytelling.

In his notes on the one-man show, Swartz describes the process as “wrenching, rewarding and healing.”

“For me, personally, it was the way recovery and hope were able to come together,” says Swartz, who lives in Harrisonburg, Virginia. “With each show, I get to see Lee every night and introduce him to people who had never seen us before. I feel like I can keep him in front of people.”

In the past year, Swartz has added a new dimension to the show, intentionally building it into a tour to draw awareness to issues of mental illness and suicide. He did a concentration of performances in September for Suicide Prevention Awareness Month, ranging from Colorado to Pennsylvania. 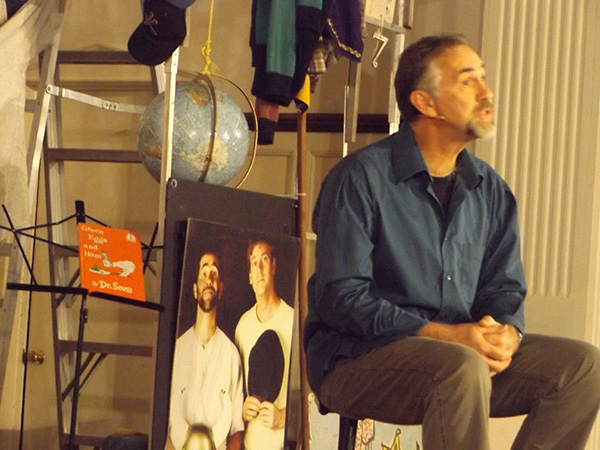 One of those shows was near his home, at Bridgewater College, where the Office of Spiritual Life and a student group called Active Minds partnered to sponsor the event.

“We lost a student to suicide several years ago and have students every year who struggle with depression and suicidal ideation,” Bridgewater chaplain Robbie Miller says. “My hope was that Ted’s story would resonate with our students in a way that more conventional presentations don’t and encourage those who are struggling to seek the help they need.”

Swartz had been to the college several times previously to do other shows, Miller says, and the feedback had always been positive.

“We knew he would address the topic of mental illness and suicide with wisdom, honesty, compassion and the kind of humor that makes you laugh and think at the same time,” Miller says.

The show, which runs about 75 minutes, is done in one act without intermission and has evolved significantly since it debuted in 2012. Swartz shares a variety of recollections, often with unvarnished emotion, and mixes in segments from some of the shows he and Eshleman had done together.

“I’m not really sure how healing works,” Swartz says in the show. “I do know that without getting back on stage, with people who gave me their souls and hearts, I wouldn’t have found healing.”

Now, by weaving the show into efforts on college campuses and elsewhere to address issues of mental illness, he hopes others can find bits of healing, as well.

The idea came following conversations with the local chapter of the National Alliance on Mental Illness (NAMI), which has had a display table at some of the shows as part of an intentional collaboration to provide resources. Swartz, who is owner and artistic director of Ted and Company TheaterWorks, applied for and received a grant to help fund a tour. And when he put out an email to gauge interest in the show, he received strong affirmation. 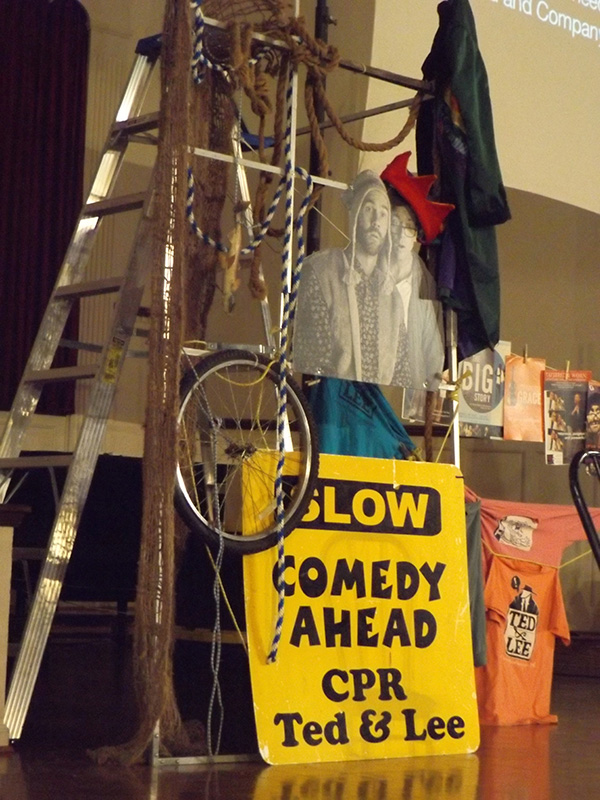 The set for “Laughter is Sacred Space” is filled with mementos from the acting partnership of Ted Swartz and Lee Eshleman. Photo by Walt Wiltschek.

“Mental health is something coming to the fore a bit more in church congregations and other communities,” Swartz says. “It felt good to build a campaign specifically around that. And the response was just quite remarkable.”

“I can’t imagine how it could have gone better,” he says. “It gives us a great deal of energy and positivity going forward and thinking about the next tour.”

In addition to his stage show, Swartz did a talkback with the audience afterwards and incorporated a photography project, inviting people to have their picture taken and post it with their story. About 60 people recorded their stories during this “Human Faces” tour.

“If the tour was only about the destigmatization of mental illness so that people can come forward and tell their stories, that’s enough reason to do a tour,” Swartz says. “There is a huge need and desire for people to be heard and to find meaning. Theater has the power to bring those two together.”

While the fall tour has ended, Swartz continues to do “Laughter is Sacred Space” periodically (including a show scheduled Nov. 13 in Columbus, Ohio, at Columbus Mennonite Church), and another tour of the show is planned for May (Mental Health Month). He also does a number of other shows with several acting partners—many of them around scriptural themes and with comedic elements.

One thing is constant, though: Whenever he takes the stage, Eshleman continues to be a part of him. And Swartz wants to continue telling that story.

“I’m going to do this a little longer,” Swartz says of the “Laughter is Sacred Space” production. “I feel like it’s taken me this long to have something to say.”