MC USA Executive Board takes action on The Mennonite, Inc., prepares for MennoCon19 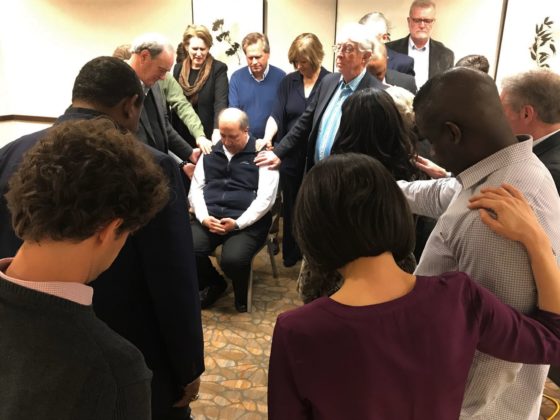 Prayer is held for Carlos Romero, whose role as executive director of MEA will end in late summer. Photo by Janie Beck Kreider.

In its final in-person meeting before MennoCon19 in July, the Mennonite Church USA Executive Board took several actions, including accepting terms related to the release of The Mennonite, Inc. (TMI), as a churchwide program entity of MC USA. The EB’s action to accept the terms passed unanimously.

The EB met March 31 to April 2 in Kansas City, Missouri, also the site of MennoCon19, the biennial convention of MC USA, to be held July 2-6. MennoCon19 registration for delegates, adults and youth remains open.

Action on The Mennonite, Inc.

To set the stage for EB deliberation, David Boshart, moderator of MC USA, provided a brief history of the past year.

In February 2018, after months of conversation, representatives of TMI and Mennonite World Review, Inc. (MWR), recommended that their boards of directors begin movement toward merging operations and governance, pending approval by four groups: the TMI board, the MWR board, MWR corporation members and MC USA. In March 2018, the TMI and MWR boards took action to approve the merger in principle, initiating negotiations between TMI and the EB to determine terms related to the release of TMI from the MC USA system.

The proposal from the TMI and MWR boards called for the creation of an independent media organization that explores “the intersection of faith, life and culture through an Anabaptist lens.” The organization, while adapting to changes in the ways people use digital and print media in the 21st century and creating a new periodical and digital platforms, would give priority to serving the members of MC USA, who are both TMI and MWR’s largest constituency. 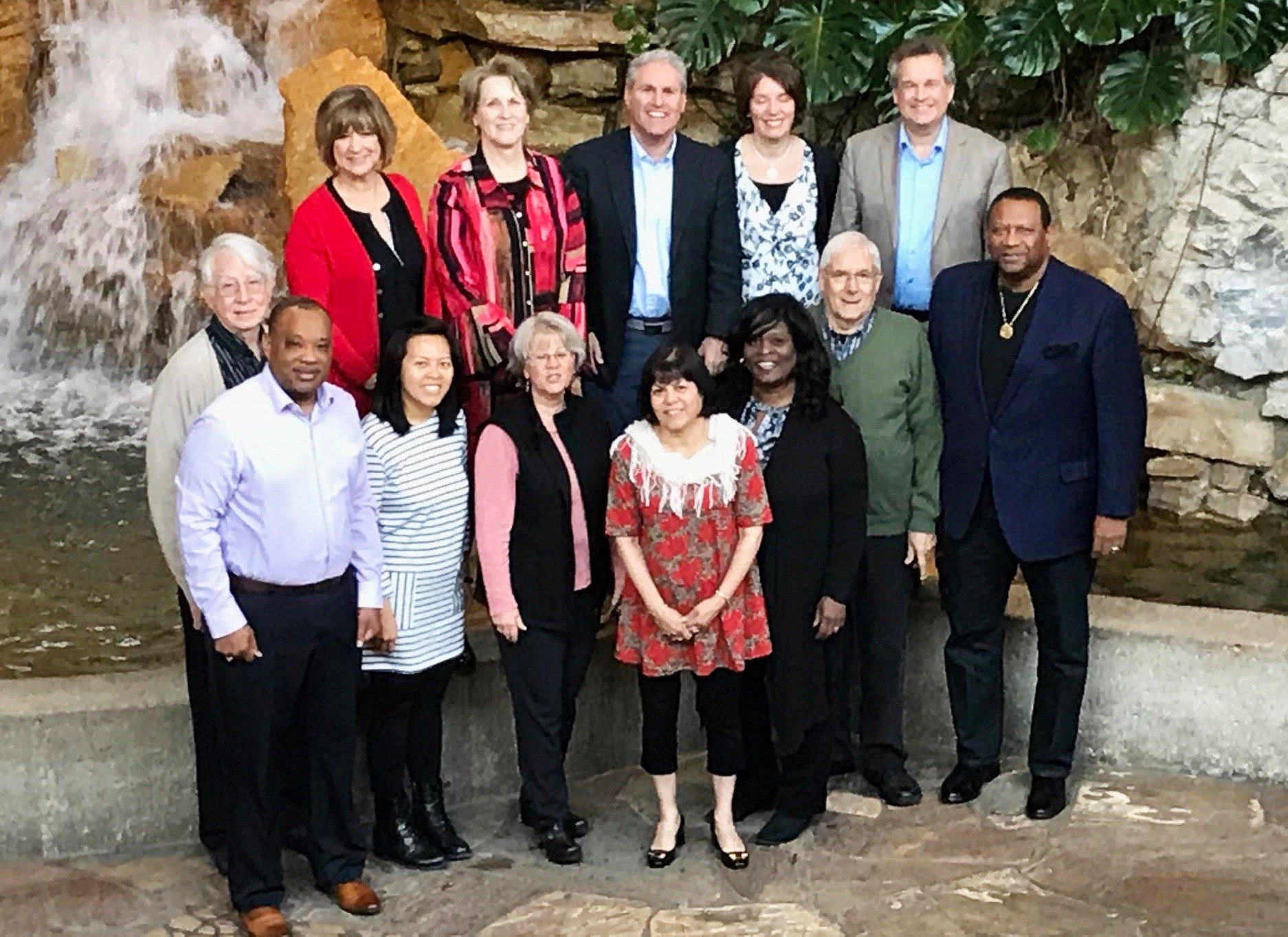 The MC USA Executive Board met in Kansas City, Missouri for an in-person meeting before MennoCon19.

After TMI and MC USA representatives were unable to agree on terms related to the proposed merger of TMI and MWR, the TMI board took action in November 2018 to withdraw from the negotiations. Following TMI’s withdrawal, EB and TMI representatives continued to be in conversation to determine a mutually beneficial outcome regarding the future of TMI and its assets.

The TMI and MWR boards met alongside each other March 29-30 in North Newton, Kansas. Glen Guyton, executive director of MC USA, joined the boards March 29. In those meetings, both boards renewed their commitment to a merger and agreed on terms to present to EB representatives the next day.

During several EB sessions, board members discussed the proposed terms, which initiate significant changes in denominational communication channels and determine how TMI’s assets will be distributed as TMI separates from the MC USA system. Following the EB’s action to accept the terms negotiated by TMI and MC USA representatives, Boshart affirmed the leaders of TMI and the vision for a new, independent media organization.

“The EB wants to communicate its strong support for your vision,” Boshart said. “We wish you success.”

The approximately 140 MWR corporation members will need to decide whether to support the merger of MWR and TMI. A decision is anticipated later this year, with a goal of completing the merger and releasing new print and digital products by September 2020.

Guyton presented a new direction for denominational communications to the EB that will include closer collaboration among MC USA agencies.

“MC USA must be able to communicate our mission and ministry in the context of who we are as a denomination,” Guyton said. “Closer collaboration between agencies, area conferences and local congregations will help bring clarity to the system.”

Guyton and Joy Sutter, moderator-elect of MC USA, summarized outcomes of the Constituency Leaders Council meetings held February 28 to March 2 in Hesston, Kansas. CLC members are considered the elders of MC USA, and while they do not have decision-making authority, they are tasked with discerning and advising the EB.

“There’s been a real shift, especially in the last two meetings, in which the CLC expressions are more positive and hopeful,” Sutter said. “It is very helpful for CLC to help us discern the tough issues in the church. They can help give us a temperature check across the church.”

Guyton presented feedback from CLC on a process for reviewing MC USA’s Membership Guidelines. CLC members responded to the question, What is the best way for MC USA to discern a process for the future of the guidelines together?

Section three of the Membership Guidelines is of particular interest, he said, given that current practices of a growing number of pastors, congregations and conferences do not align.

“We are not fully following the procedures outlined in the guidelines,” he said. “I don’t think [the process for looking at the Membership Guidelines] is the burden of the EB alone. A mentor once told me, ‘We’re in this thing together.’”

Delegates at the 2015 assembly reaffirmed the Membership Guidelines, with the stipulation that no changes would be considered for four years. There are no plans to bring a resolution to this summer’s delegate assembly regarding membership guidelines. With delegates, the EB will describe the process of getting CLC input and explain a process for engaging MC USA constituency during the next biennium through teaching and study resources.

During discussion of delegate assemblies, Boshart, the moderator, raised a question about how to effectively get delegate input. “Is it time for us to bring in more of an emphasis on teaching that equips delegates to do discernment at their tables, rather than expecting everything we need in terms of wisdom to be at our tables?” Boshart said.

“I’ve been a part of this church all my life, but because of my culture and how dynamics worked in our congregation growing up, when you put something on paper, that meant ‘this is the way it is,’” he said. “It took me years to understand that these documents aren’t legislative.”

The EB began a process of reviewing the MC USA bylaws and took action on suggested changes that will be presented to the Delegate Assembly at MennoCon19 for discussion and possible ratification. One of the MC USA bylaw changes would allow all congregations to send one additional delegate, a youth aged 16-21, while racial-ethnic groups could send two additional youth delegates. If delegates ratify the change, these youth would be permitted to vote, unlike in past conventions in which they have only participated.

The EB conducted its regular three-year review of Mennonite Education Agency. Prayer and blessing was given for Carlos Romero, whose role as executive director of MEA will end in late summer.

Other actions by the EB included these: