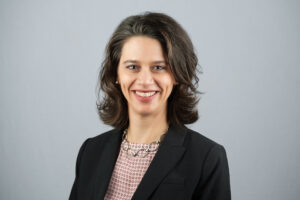 HARRISONBURG, Va. — Amy Gingerich has been reappointed as MennoMedia executive director. The MennoMedia Board tapped Gingerich for a second four-year term as leader of the denominational publishing arm. Gingerich was first appointed in 2018.

“In all we do at MennoMedia, we strive to engage people in connecting faith and life,” said Gingerich. “I’m delighted to accept another term for this ministry and heartened to see all the ways that our products and resources are making a difference in people’s lives.”

“Amy represents the best of our agency leaders,” says Glen Guyton, Mennonite Church USA Executive Director.  “She is a joy to work with, and her leadership has inspired great collaboration between various entities in the denomination. I value her commitment to both MC USA and MC Canada, her creativity, and her ability to deliver great Anabaptist products in an increasingly challenging marketplace.”

Mennonite Church Canada Executive Minister Doug Klassen states, “Amy’s resilience has been a key factor in carrying MennoMedia through many changes, in particular, the struggles of COVID adjustments. Her leadership, ambition, hopes, and detailed plans/strategies portray a humble confidence that is reflective of the supporting denominations and on our call to be agents of healing and hope in our world.”

MennoMedia’s accomplishments in the last four years under the leadership of Gingerich include: