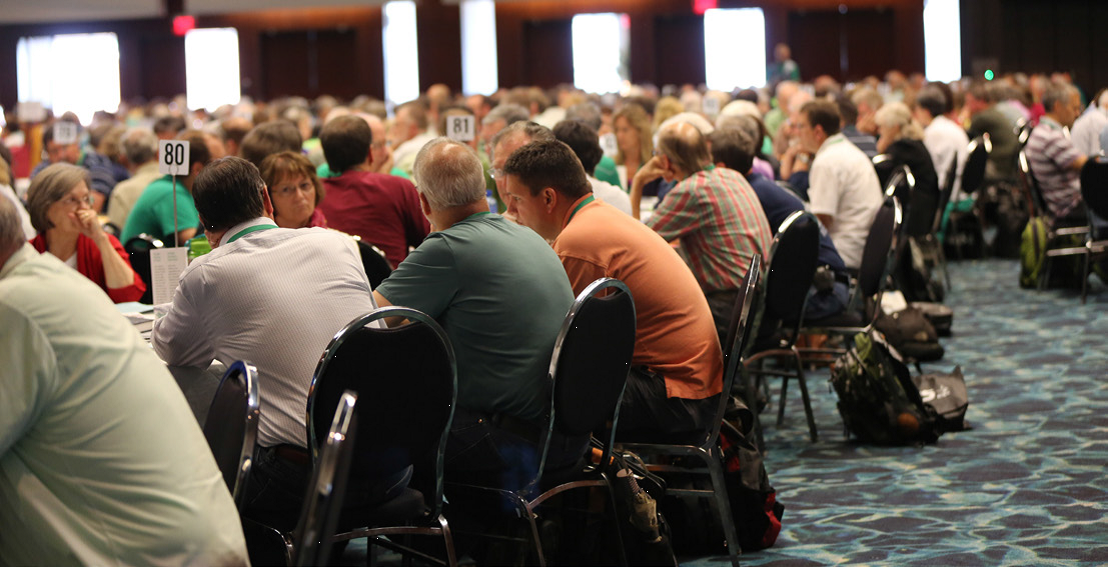 Delegates in table discussion during Delegate Assembly on July 1, in Kansas City, Missouri.

“In each of these stories MHS was in some way instrumental; each of us was wounded and we were all on the road,” he said. “In spite of that, God’s spirit breaks in, and when that happens, we remember why we do this work.”

Executive Director Ervin Stutzman referenced the Guidelines for Biblical/Communal Discernment reference document as he elaborated on the meaning of discernment, weaving personal stories into detailed discussion because it’s “a vague term that needs review.”

“So much of discernment is asking what God’s up to in this situation,” Stutzman said. “We’re speaking about this because we’re a witness to the world.”

“How is God acting, and how do we align with God?” he asked. “We bring our issues, our fears, our faults … and see what Jesus can do among us.”

“Trust is an important element in communal discernment,” Jane Hoober Peifer added, noting that there are different ways to discern God’s will. “We must acknowledge our deep need to rely on the Holy Spirit.”

Delegates considered and passed the “Faithful Witness Amid Endless War” resolution, which calls for a recommitment to the way of peace and a rejection of mechanized (drone) warfare technologies and calls congregations to trust God, not modern warfare, for security.

Soto Albrecht invited two sponsors of the resolution to introduce it: Clair Good and Ruth Harder.

“If it is adopted, this wouldn’t be bragging rights for Mennonites,” said Harder, pastor of Rainbow Mennonite Church in Kansas City, Kansas. “We must work on understanding and living Jesus’ nonviolent lifestyle.”

“I believe it’s a moral calling as a peace church,” said Good, motioning toward a small drone model onstage to describe the urgency of passing the resolution.

He called for “assertive grace” that reaches across boundaries and humanizes the enemy.

“We will never experience transformation by blowing our enemies up by pushing an impersonal button on a television screen,” he said. “Let us instead try to find ways to eat at the table with our enemies and experience a new anointing of God’s presence.”

After table discussions, delegates voiced questions, comments and concerns in an open mic time. Table leaders reported on the discussions at their table for the board to consider.

An amendment was proposed to the resolution calling for an “… immediate ban on research, development, production and deployment of robotic and autonomous weapons, including military drones, and associated artificial intelligence technologies — placing them in the same category as chemical and biological weapons.”

Both the resolution and the amendment passed with broad, but not unanimous, support.

Delegates in table discussion during Delegate Assembly on July 1, in Kansas City, Missouri.