By Jessica Griggs for MC USA 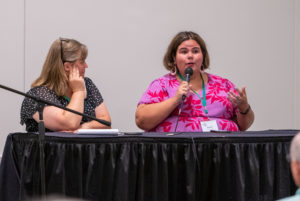 In a packed room at MennoCon21, pastors Amy Yoder McGloughlin, of Frazer Mennonite Church, and Joanne Gallardo, of Berkey Avenue Mennonite Fellowship, led a seminar, titled “Practical Steps To Becoming a Welcoming Congregation” on July 9. Yoder McGloughlin and Gallardo shared their experiences of working with their own churches to establish statements that welcome members of the LGBTQ community into congregational life.

Only two days earlier, the parents of a queer son hosted a MennoCon21 seminar, called “Always My Child/Forever My Parent,” in which they answered questions about how they came to terms with their son’s sexuality. One parent expressed that the process of acceptance took a lot of time, saying, “It really began a grieving process for me, and I was in total denial for several years.” The parents eventually came to affirm their son’s sexuality, but others that they cared about continued to reject their son based on his sexual orientation, which they expressed was damaging and heartbreaking for the whole family.

Many churches within Mennonite Church USA have already started — or completed — the process of welcoming queer people into their congregations, and Yoder McGloughlin and Gallardo encouraged more churches that are ready to follow their lead. They expressed that the process required for a church to discern whether it is ready to become a welcoming congregation is difficult but necessary.

Gallardo explained that it is not enough to just be welcoming; she expressed that affirmation, and even celebration, is necessary to avoid the tokenizing effect that having an empty welcoming statement will have on the LGBTQ community. Yoder McGloughlin said, “Congregations that have excluded queer folk have to start with repentance. First thing, we have to repent of the ways that we have excluded people, and we have to go through that process of recognizing the damage that has been done.” 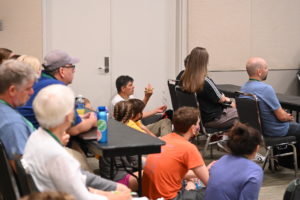 Together, Yoder McGloughlin and Gallardo shared a list of “do’s and don’ts” from the  Brethren Mennonite Council for LGBT Interests for congregations working through this process:

When asked how to continue to be welcoming after the discernment process is over, Gallardo ended the seminar by saying, “Make it your mission to be inclusive of the LGBTQ community.” She offered ideas like attending the local Pride celebrations, adding a rainbow flag to the church sign or donating to local LGBTQ organizations that work with LGBTQ youth