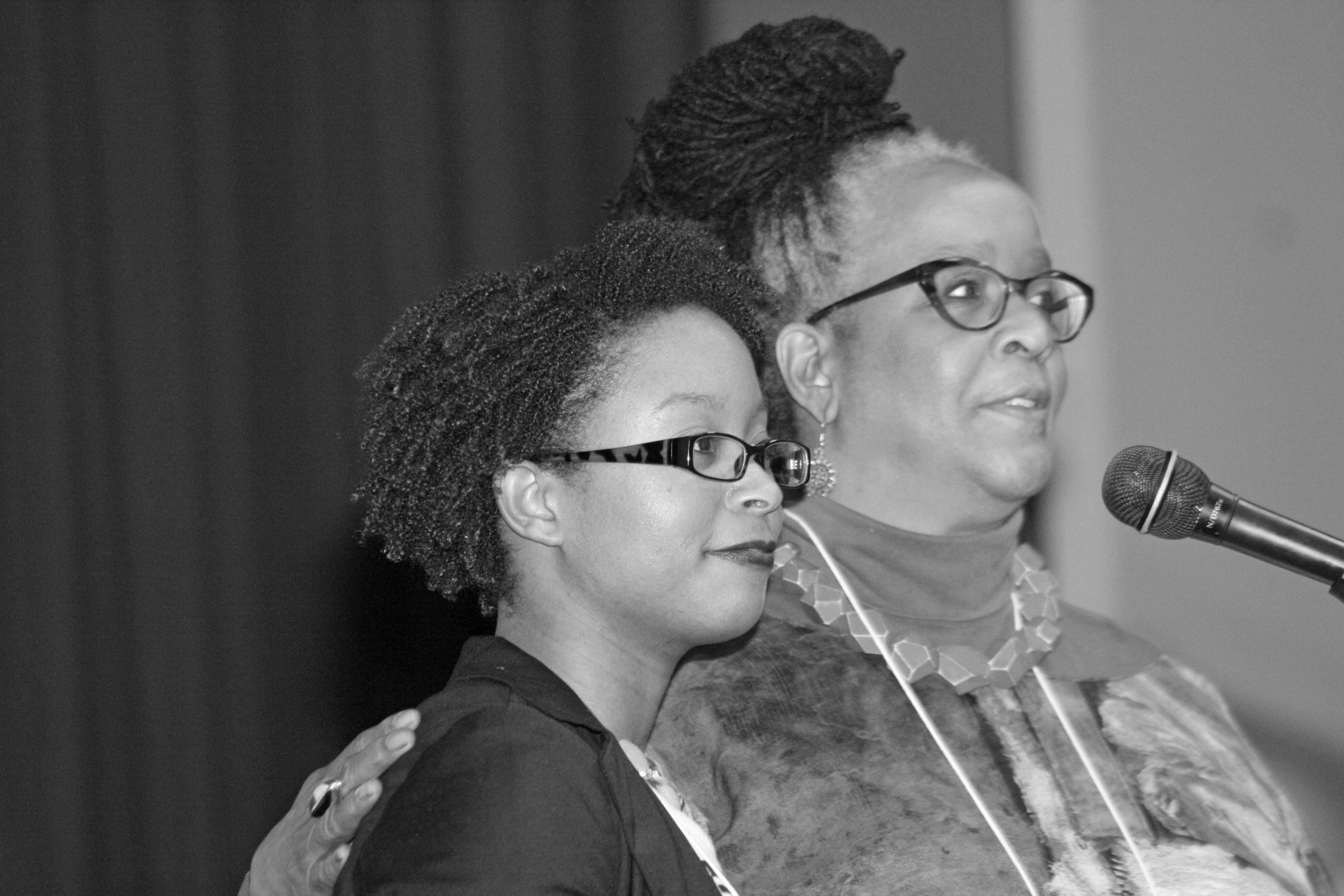 DaVonne Harris, left, and Michelle Armster present at the Hope for the Future III conference in January 2014. (Photo by Carol Roth)

ELKHART, Ind.—In the fourth year of the Hope for the Future conference, leaders interested in advancing multicultural leadership within Mennonite Church USA will seek to identify and broaden power-sharing and decision-making within the church.

By examining the decision-making processes, Hope for the Future IV will help people connect and participate in decision-making, regardless of their culture and family name, said Carlos Romero, executive director of Mennonite Education Agency and a planner of the event.

This year, a special invitation is extended to Racial/Ethnic young adults from Mennonite colleges.

“Whenever people enter institutional work, it can be years before they figure out how the institution works and how the power is used,” said Iris de León-Hartshorn, lead coordinator for Hope for the Future. She is also the director of transformative peacemaking for Mennonite Church USA.

“We hope this [conference] will introduce younger people to leadership in church organizations with more information [about how church institutions operate] than we had, which will help them participate more and have more influence within an organization,” said de León-Hartshorn.

The January 2014 gathering was the first to include white leaders of Mennonite institutions; planners invited them so that they could work toward systemic and institutional change.

“Hope for the Future provides a great forum to connect with others who either share a common experience of having been impacted by racism, or who share a common commitment to eradicate this sin,” said Stanley W. Green, executive director of Mennonite Mission Network. Green is involved in planning the conference. “The gathering is a place for fellowship, support, and imagining together the possibilities before us as we struggle for a post-racist church.”

One of the valuable opportunities offered by the conference is networking. Romero said that he’s heard human resources managers comment that although they’re committed to hiring Racial/Ethnic people, they often lack connections with Racial/Ethnic people.

“I’m very excited about this year, because we’re moving into the practical impact of how to help people of color have a more influential role in the denomination,” said Romero. “This conference would be an opportunity for people to build relationships with the growing part of the church—that is the future of the church.”

Fifteen percent of Mennonite Church USA members are Racial/Ethnic, according to the most recent sociological survey conducted by Conrad Kanagy in 2006 and published in Road Signs for the Journey. This is an increase from 6 percent Racial/Ethnic membership in 1991. Kanagy’s survey also suggested that Mennonite membership overall was declining and aging, with the exception of Racial/Ethnic members, who were younger on average.

The invitation to young adults came out of conversations during the January 2014 Hope for the Future III conference. Many of the participants, from both Racial/Ethnic and white cultures, shared that the mentorship and guidance they received from experienced adults were instrumental to their success as leaders.

“For years we have engaged in awareness-raising regarding the dynamics of systemic racism and the need for developing intercultural competency,” said Green. “Hope for the Future has evolved, and we’re at the stage where the opportunity is before us to engage constructive strategies to move toward greater equality and inclusion for people of all ethnicities in our church.”

Register for the conference online by Oct. 1, 2014, to receive the early registration rate of $125 per person. After Oct. 1, the rate goes up to $150. Student registration is $75 before Oct. 1, and $100 after. Registration fees include the event program costs, transportation from the hotel to the conference site, and meals/snacks. Participants are responsible to cover their own lodging cost and transportation to Fort Myers.

Caption: DaVonne Harris, left, and Michelle Armster present at the Hope for the Future III conference in January 2014. (Photo by Carol Roth)