AKRON, Pennsylvania — “I think religious minorities in this country, no matter who they are, are feeling under threat,” said Trina Trotter Nussbaum, interim director for Eastern Mennonite University’s (EMU) Center for Interfaith Engagement. 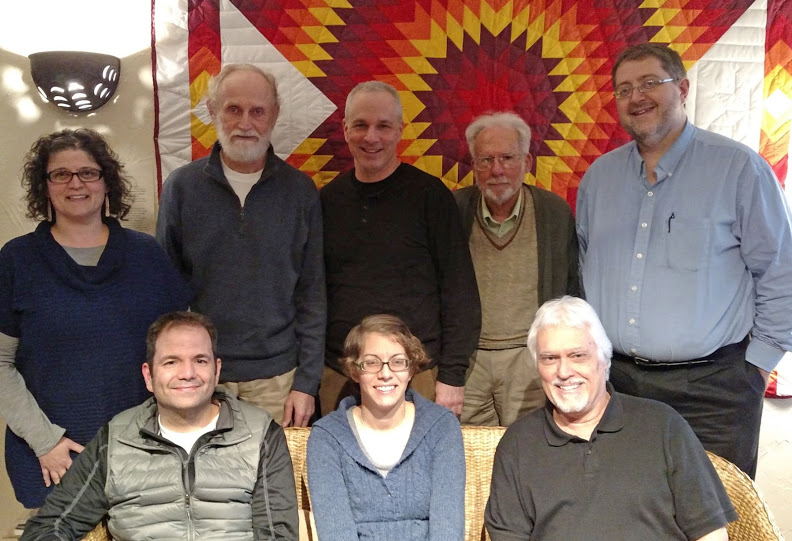 The February 15-16 meeting, facilitated by Mennonite Central Committee (MCC) and Mennonite Mission Network (MMN), gave participants a chance to look critically at their agencies’ roles in interfaith engagement and develop best practices for relating across faiths.

Gathered at MCC’s Welcoming Place, representatives from the six agencies helped each other identify weaknesses in the way their agencies, and the U.S. Anabaptist community as a whole, approach interfaith engagement.

One problem identified was a tendency to retreat into enclaves and not engage with those who are different, including non-Christians. Some other weaknesses included insufficient passion for sharing the gospel, congregations’ fear of relating to people of other faiths and the involvement of Anabaptist churches in the U.S. culture wars.

Some particular Anabaptist strengths listed by participants included extensive development and disaster response efforts worldwide, which exhibit care for all; a long history of respectful and widespread cross-cultural engagement; and the pacifist stance of Anabaptists, which has helped build trust in many places globally.

Alain Epp Weaver, Strategic Planning and Learning Director with MCC, said he came away from the meeting “convinced that Mennonites have an important niche” in the work of interfaith engagement.

Weaver’s experiences working with MCC have shown him the possibilities that interfaith cooperation can bring. Recently he has been inspired by stories of Christians and Muslims working together to protect each other and provide relief in war-torn Syria. 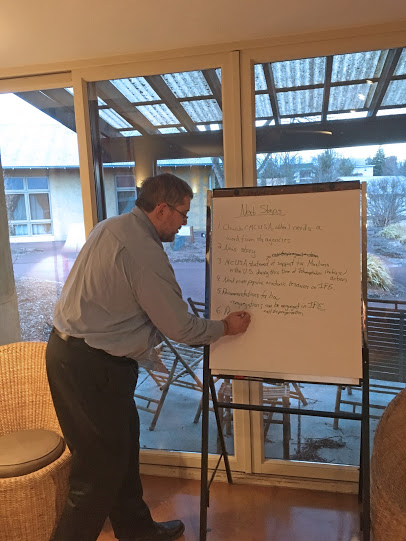 Alain Epp Weaver, Strategic Planning and Learning Director with Mennonite Central Committee, writes down next steps at the end of a meeting between Anabaptist interfaith workers from different agencies. The meeting explored better ways to engage other faiths, locally and globally. Photo by Jonathan Bornman.

Jonathan Bornman, a member of EMM’s Christian/Muslim Relations Team, said that the need for better interfaith engagement can be felt locally. Recently his friend, an asylum seeker from Iraq, told Bornman he was afraid for the upcoming hearing to determine his asylee status. If he is sent back to Iraq, his life will be in danger — but as a Muslim immigrant, he is afraid he will not be allowed to stay in the U.S. He asked Bornman to pray for him.

Anabaptist interfaith workers had a similar meeting before the Council of International Anabaptist Ministries meeting in January 2016, and they are planning another for next year.

“An explicit attempt to address the issue of interfaith relations is a relatively new agenda for the (Anabaptist) body as a whole,” said Kampen. “We come from very different places and experiences, so the conversation is very important.”

“Those assembled did not all agree on how (interfaith engagement) should happen, but that just illustrates why the conversation is so important,” Krabill elaborated. “We made some important steps toward common affirmations on how to proceed, and agreed that we needed to give more attention to how our agencies equip the church to more effectively understand and engage our neighbors of other faith traditions.”

“The advantage of meeting together as organizations is the overlap and synergy to be had, and the broader reach that working together can bring,” Weaver said.

Each organization has its own vast networks, whether global or local. Krabill reported that MMN currently fosters relationships with workers and partners in over 55 countries. EMM workers served in 36 countries in 2016, while MCC serves in 54 countries. EMU’s Center for Interfaith Engagement serves a student body of about 1,880 from over 50 countries. CPT works globally in peacemaking and advocacy in regions with violence or injustice issues, including advocating for indigenous peoples in North America. Mennonite Church USA reported 95,000 adult members in about 875 congregations as of May 2015; Mennonite Church USA is also part of Mennonite World Conference, which includes more than 1.7 million baptized believers in 83 countries.

The eventual goal of these meetings, said Weaver, is for the organizations to better support and resource congregations as they reach out to neighbors of other faiths. When the representatives meet again next year, they plan to identify best practices for interfaith engagement to recommend to Anabaptist congregations.

“It has never been more important for the church to step up to the plate and provide a model for how Christ followers should engage people of other faith traditions,” said Krabill.