Resolution on the Status of Membership Guidelines passes 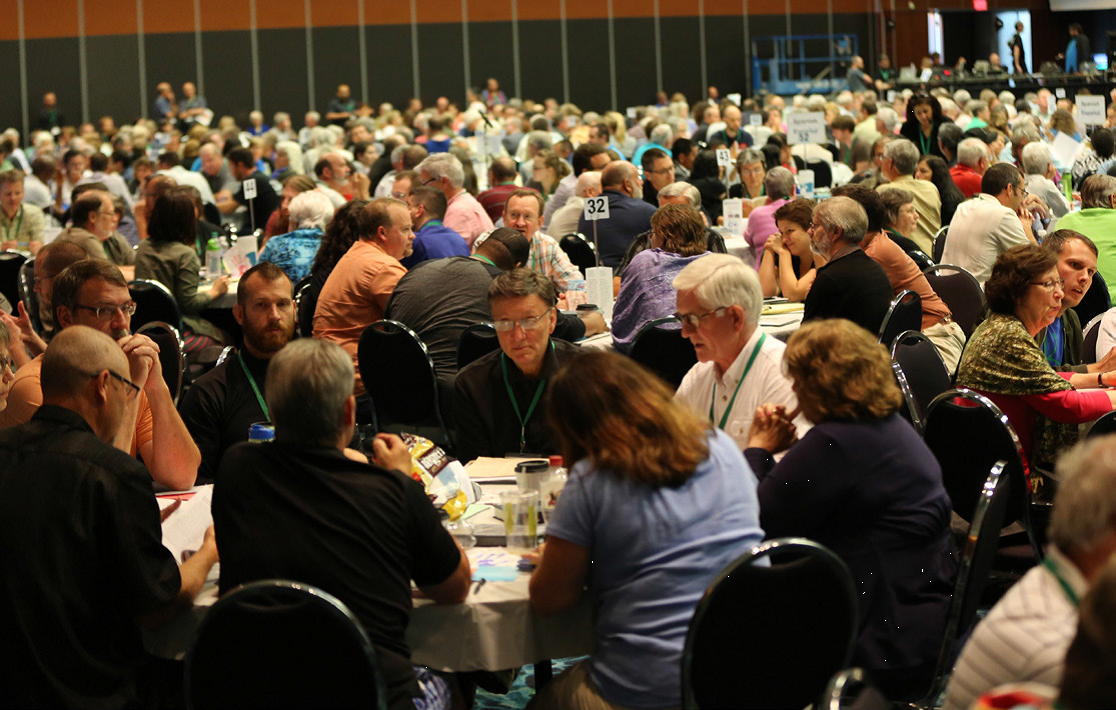 Delegates discuss the Resolution on the Status of Membership Guidelines in table groups at the assembly in Kansas City on July 2. Photo by Abby Graber.

KANSAS CITY, MISSOURI. (Mennonite Church USA) — Over 1,000 attended the afternoon delegate session on July 2. Introducing the membership guideline resolution for delegates to discuss were two Mennonite Church USA board members, David Sutter and Yvonne Diaz. They reported that the resolution was both written and approved by the Executive Board (EB) only.

The membership resolution sought to uphold the guidelines regarding church membership and same-sex marriages adopted by the Delegate Assembly in 2001, upon the formation of Mennonite Church USA.

According to the resolution, “the delegate assembly will not entertain changes to the membership guidelines for the next four years, in order to exercise forbearance on matters that divide us and to focus attention on the missional vision that unites us.”

The board’s intent was for this resolution to be a companion to the aforementioned forbearance resolution.

“It seeks to find a way forward while addressing the polity questions of our church,” Diaz said. “It also intends to provide concrete ways we can live into the forbearance resolution through strengthening our discernment practices.”

The pair acknowledged that this resolution would be a compromise for some, but according to EB bylaws, the board must act in the interest of the whole of the church at any given time.

“We’ve heard credentialed leaders speak passionately from clearly different places,” Sutter said. “Ultimately, there was no consensus. Many of us see no clear direction. We acknowledge that this is painfully hard for those who feel that this is clear. But as a whole, we do not.”

Jane Hoober Peifer, serving as the assembly discernment guide, then asked delegates to hold the tensions of “both/and instead of either/or thinking in the church.”

“This is not a new challenge; we do it often in our congregations,” she said. “Think of the other times in your lives where you’ve had to hold two different convictions, and how you experienced the movement of the Spirit.” She then asked table leaders to pray before beginning discussions as small groups.

Delegates raised concerns and asked for clarification on several different parts of the resolution during the open mic time. Ervin Stutzman, executive director of Mennonite Church USA, referred to a list of Frequently Asked Questions prepared for delegates and released on June 18.

“If both of these resolutions pass, the Executive Board will see it as a mandate to hold together the traditional stance of our church with an approach that grants freedom to congregations and area conferences to work things out in their own context, with mutual accountability with the CLC,” Stutzman explained.

Patricia Shelly, moderator-elect, led the hymn “Lord, listen to your children praying” as the pastors in red stoles continued to walk the floor, holding up hands in prayer. The resolution passed by 60 percent. Of the 811 delegate votes cast, 473 voted yes and 310 voted no. There were 28 delegates who abstained.

Elizabeth Soto Albrecht, moderator, asked delegates to receive the results in silence and gave time for table groups to reflect on the decision together. “We have discerned together,” she said. “Now the board has a mandate to continue working at these documents in a very humble way. May the documents not be used to divide us, but may the Spirit of God, the Maker of us all, be the one who brings us together.”

Another part of the resolution presumes that “area conferences will grant ministerial credentials consistent with the guidelines in A Shared Understanding of Church Leadership,” a shared polity manual of Mennonite Church USA and Mennonite Church Canada. Terry Shue and Nancy Kauffmann of the leadership development team of Mennonite Church USA invited delegates to give written feedback to the manual. Soto Albrecht emphasized that this is a working document.

The afternoon session began with a testimony from MennoMedia, the publishing and media agency of Mennonite Church USA and Mennonite Church Canada. CEO Russ Eanes spoke of his Harrisonburg, Virginia, office’s commitment to pray together daily, and encouraged others to take up this practice. He also acknowledged that MennoMedia’s success is not due their own cleverness or strategies, but to God’s intercession.

Delegates discuss the Resolution on the Status of Membership Guidelines in table groups at the assembly in Kansas City on July 2. Photo by Abby Graber.