#WeAreMenno: Stand Up. Use Your Voice. Move Your Feet. 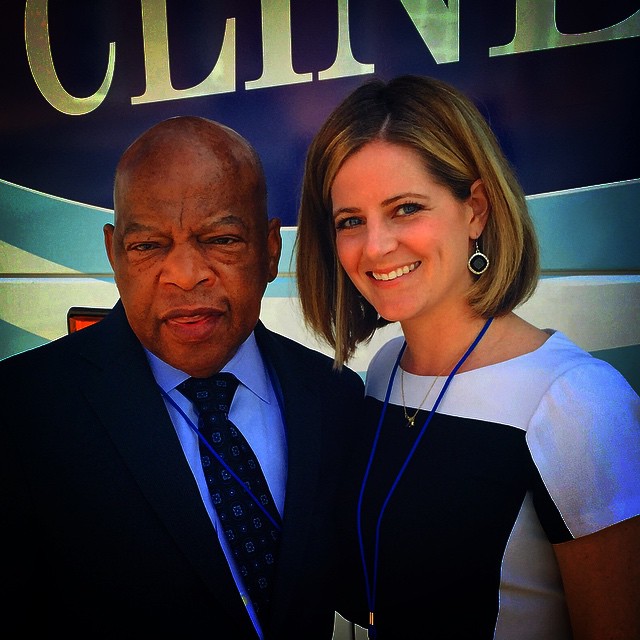 (Franconia Mennonite Conference/Mennonite Church USA)—This year marks 50 years since “Bloody Sunday,” an event that gripped the nation and continues to remind us of the injustices faced by Black Americans in Alabama and across the South. On the 50th anniversary, I returned to Selma, Ala., to bear witness to this historic event.

This year was my sixth journey to Selma, with each trip bringing fresh pain, restored hope and reminders of the power of reconciliation. It was on this trip that I was moved by something Congressman John Lewis of Georgia said in his distinctive slow, deep cadence: “Move your feet.” When injustice is happening in this world, don’t just pray about it. When our brothers and sisters are being ostracized and told they are not equal, stand up. Use your voice. Move your feet. This message challenges me as I look around my world at issues of injustice.

Every other year, a nonpartisan delegation of U.S. members of Congress joins Lewis to walk through the history of the Civil Rights Movement with those who led the efforts in the 1960s. This year, more than 100 members of Congress attended, a record number.

A highlight of the weekend happened on the steps of the statehouse in Montgomery, Ala. Peggy Wallace Kennedy, daughter of George Wallace, who was governor of Alabama during the Civil Rights Movement, reflected on her life as a child during that time. She spoke of her father, who was strongly opposed to giving Blacks voting rights and is most known for saying, “Segregation today, segregation tomorrow, segregation forever.”

As she spoke, I reflected on her life’s journey and the challenges she must have faced in coming to understand who her father was and how to move beyond that heritage. She shared a story about when her son first realized who his grandfather was. Her son asked her, “Why did Paw-Paw do those things to other people?” She answered him, saying her father “never told her why he did those things, but they were wrong, and it would be up to us to help make things right.”

This led me to give thought to the civil rights issues of today. Will our children look back at the heritage we are leaving them with pride? Are we standing on the right side of history with the current issues at hand? Which areas in our lives and in the church are still segregated? Are we moving our feet?

As the weekend carried on, we visited the 16th Street Baptist Church in Birmingham, Ala., where four young girls were killed in a Ku Klux Klan-led bombing in 1963. We attended a riveting church service at the First Baptist Church, where John Lewis was trapped for hours, concerned for his safety, until John F. Kennedy sent troops to escort him and others from the church. We heard heartbreaking stories and history lessons over the weekend that made me question whether we have come far enough with civil rights.

Then we arrived in Selma. The delegation waited at the base of the Edmund Pettus Bridge as the presidential motorcade crossed with the usual fanfare and “Hail to the Chief” playing. John Lewis walked to the podium and introduced President Barack Obama. As they embraced, I felt an enormous sense of pride. Race relations in this country are certainly not perfect, and there is work yet to be done. Even during the president’s speech, people were protesting recent events in Ferguson, Mo. But 50 years ago on “Bloody Sunday,” John Lewis never expected to introduce a crowd of more than 21,000 people to the nation’s first black president.

The fight against discrimination is not over. We have come far but must still stand up against racism and all forms of discrimination and segregation. It is my ongoing prayer that our churches can be a true sanctuary, a home and safe haven to all. As the Rev. Dr. Martin Luther King, Jr., said, “Injustice anywhere is a threat to justice everywhere.” I hope Mennonite Church USA can move toward a place where we confront the discrimination that currently exists and choose to be on the right side of history, to move our feet and welcome every one of God’s children.