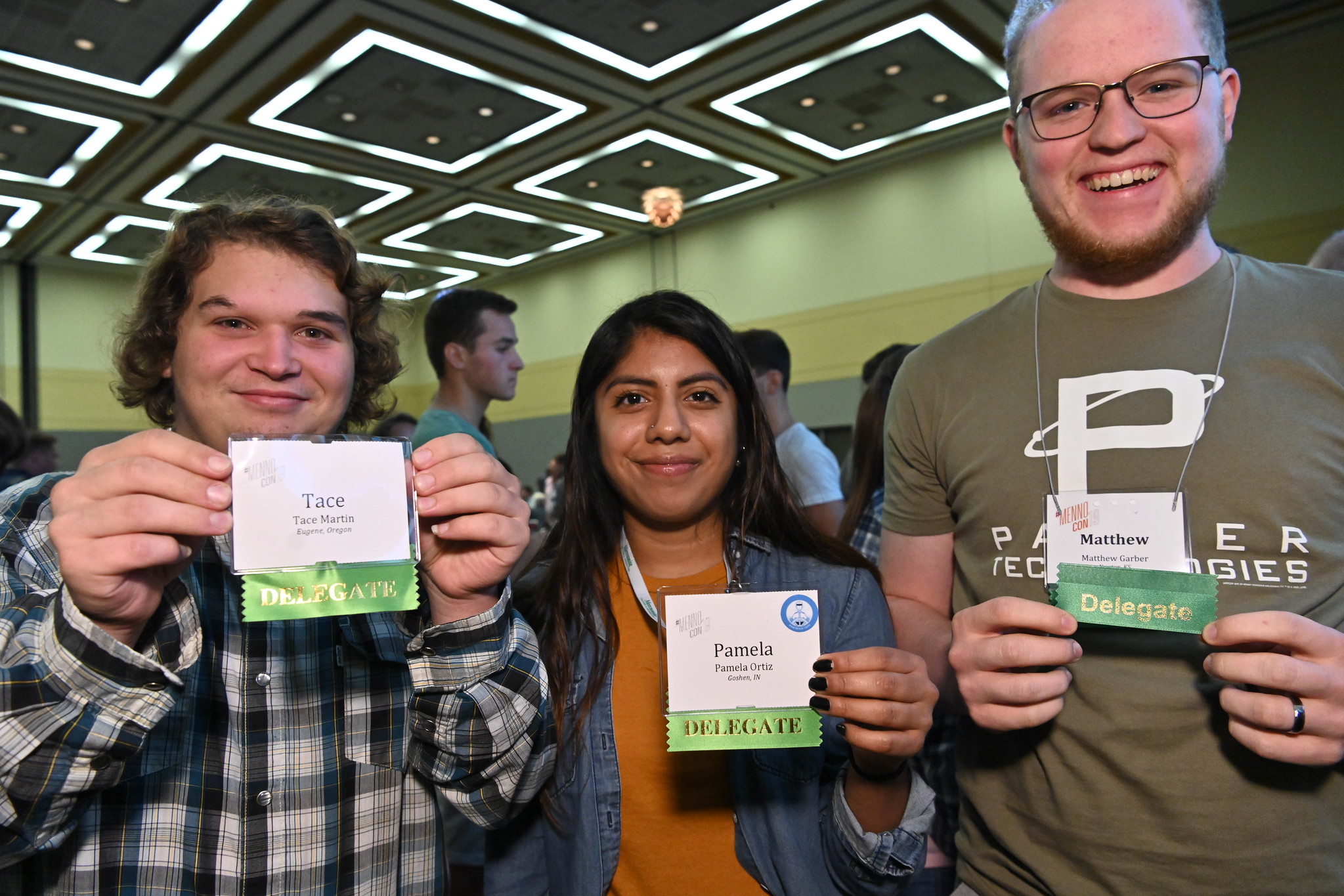 Step Up participants (L-R) Tace Martin, Pamela Ortiz and Matthew Garber add “Delegate” tags to their name tags following the vote that made them official delegates.

KANSAS CITY, Missouri (Mennonite Church USA) — The 26 youth who began the Delegate Assembly as Step Up participants will end it as official delegates. A vote passed in the July 5 delegate session to change the bylaws to add youth, ages 16-21, as additional official delegates representing each MC USA congregation, conference and Racial/Ethnic group.

“This is a historic moment,” said David Boshart, moderator of MC USA, inviting all the youth delegates to the stage to recognize the significant moment. Executive Board leaders symbolically removed the delegate markers from their own nametags to present to the youth. Six people voted against the motion; all other delegates were in favor.

The impetus for this bylaw change came from the approximately 30 youth delegates who participated in the Delegate Assembly as part of the Step Up program at the 2017 convention in Orlando, Florida. After the convention, the Step Up organizers put together feedback from the participants and met with Executive Board members to look through bylaws and see what should be changed there.

Tace Martin from Eugene Mennonite Church in Eugene, Oregon, was excited to participate as a Step Up delegate this year after his disappointment that the youth didn’t have a voice in delegate decisions at the 2015 Kansas City convention, which he attended as a youth.

“I was much more interested in what was going on in the delegate sessions, and there was no connection with the youth convention. I wasn’t alone in feeling like this,” said Martin. “As a youth, I felt ignored.”

“I think it’s a huge step forward for the church. The youth have to be included in this. If not, what’s the point? It feels really incredible because I feel like it means that the future of the Mennonite church is a little bit brighter,” Martin said.

Glen Guyton, executive director, also reviewed a list of other bylaw changes that were intended to update the language and clarity of the bylaws, removing, for example, language that referenced using a telegram as a communication channel. These changes needed a unanimous vote to pass due to the timing of when the delegates received these updates, and they received unanimous affirmation.