Marching from the margins (part two) 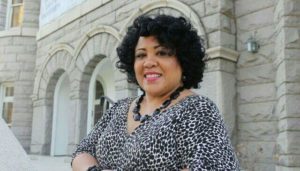 Melody M. Pannell currently serves as assistant professor of social work at Eastern Mennonite University. It is her life mission to embody practical theology through the values and ethics of social work and encourage those that she serves to engage in a transformative journey of emancipatory hope in action and empowerment through holistic, therapeutic and restorative ministry. Melody is also the founder and executive director of The Destiny’s Daughters Empowerment Ministry LLC. and the assistant executive director of Men About Positive Purpose LLC, a spiritual empowerment and personal leadership development program that strives to assist adolescents and young adults to evolve into persons of good character and integrity, to enable them to overcome challenges and to realize their God–given purpose through therapeutic mentorship, spiritual formation and community organizing. Melody will also be a speaker at Orlando 2017. This is the second part in a two part series where Melody shares insights from her lived experiences that lead her to participate in the upcoming Women’s March on Washington.

As the plans for the “Million Women March” gained momentum and publicity through social media, conflicting opinions and questions emerged.

Who were the organizers of this march? Why was the march being called the “Million Women March?” How are women of color being represented in positions of power, planning and purposeful participation? Issues of cultural appropriation, political co-option, tokenism and dis-empowerment were publicly raised.

Many articles, blogs and social media comments remarked that the original organizers of the march, white liberal feminists, had failed to address the marginalization of black women within this current feminist movement. Women’s right activist, Brittany T. Oliver, from Baltimore, Maryland, said in a Nov. 17 blog post, “This is why so many Black women and Black people of various identities struggle with connecting to mainstream feminism. It has so often failed to give us a platform to discuss how racial inequality relates to gender inequality. This doesn’t mean that we don’t care about equal rights across the board; it just means we can’t ignore the racism within the movement.”

As a woman of color like Oliver, I care deeply about equal rights of women across the board and honestly, I could have also made the decision to not lend my presence to this march. I personally understand the pushback and relate to the valid concerns raised by many within the African-American community. As a young Black woman participating in the original Million Women March in 1997, I benefited greatly to be surrounded by my Black elders and leaders who stood in positions of self-appointed power, teaching me the values and principles of collective unity, self-determination and purpose.

So why would I, a strong woman of color, make a conscious choice to attend the now renamed Women’s March on Washington? I am in agreement that feminism is not enough.

In her article titled, Towards a Politics of Location, Women’s and Gender Studies Professor Joan Borsa wrote, “Most of us come into feminism because the social situations we experience necessitate struggle, analysis and change, but becoming more politically and/or theoretically engaged does not magically eradicate the complex relations within our everyday realities.” These everyday realities of race and gender are what Black feminist and womanist scholars such as Alice Walker, Patricia Hill Collins, Kelly Brown Douglas, Katie Geneva Cannon and Renita J. Weems have given voice to.

As a black feminists and womanists, they refused to settle for just the advocacy of gender equity but called for this patriarchal society and our white sisters to acknowledge the dual discrimination of gender and racial inequalities in an effort to bring about a more just and fair movement and society.

In another article, Rethinking Marginality, Professor Borsa also notes that as women we must acknowledge that, “our historical, social, political and economic realities vary — there is a great deal of structural differences between us. Part of our struggle is to be able to name our location, to politicize our space and to question where our particular experiences and practices fit within the articulations and representations that surround us.”

In response to the feedback that the original organizers of the march received, they implemented many changes including bringing on three distinct women of color to serve as national co-chairs, creating a mission, “recognizing that our vibrant and diverse communities are the strength of our country” and laying out Unity Principles with the overarching idea that, “Women’s Rights are Human Rights and Human Rights are Women’s Rights.” Although I am appreciative of these recent adjustments and attempts to bring a better sense of unity to this movement, I continue to recognize that there is a distinct position in which I march from, a position that I invite others to consider marching from as well.

It is my opinion that The Women’s March on Washington started from the center of white privilege and political power. Yet, I choose to march from the margins. I believe that I am called to a “radical culture practice.” Social Activist bell hooks challenges that, “the space of radical openness is a margin — a profound edge. Locating oneself there is difficult yet necessary … MARGINALITY is much more than a site of DEPRIVATION; it is also the site of radical possibility, a space of resistance.”

It is the space that my white mother embodied when she left her conservative town to dwell with, love and encourage the self-empowerment of the African-American community in Harlem. It is the space where my father taught from as one of the first African-American Mennonite Pastors in the predominately white center of Lancaster Conference. It is the margin that I speak from when I became one of a few women of color faculty members at Eastern Mennonite University and it is the position that I will march from on the day after the inauguration of the 45th President.

As a radical Anabaptist womanist, I am not called to the center. The margin has been my location to produce the counter-hegemonic discourse that has represented my Anabaptist faith and core values. I choose to march on Washington with women that represent all aspects of our diverse nation. I choose to march with my fellow Anabaptist Mennonite white women and witness the church take a collective and public stand against the injustices of civil rights; something that I have been waiting for as an urban Anabaptist woman of color all of my life. I choose to march with my fellow women of color as liberators of preconceived stereotypes of black women, of well-meaning intentions of white feminist, of political genocide of people of color and of mission mentalities of the church.

I march as a liberator of not only the oppressed but of the oppressor. I march from the margins, the space where bell hooks challenges us “to help identify the spaces where we can begin the process of re-vision … a site of creativity and power … an inclusive space where we can recover ourselves, where we can move in solidarity to erase the lines of privilege and oppressed.”

This march may have started in the center, but I invite you to the place that your black and brown sisters are calling you to, a place that our radical Anabaptist faith empowers us to serve from. May we march in unity and work together to create a new political location, where pain is transformed into power and the space of radical openness becomes a profound edge of possibility.