The Vulnerability and Strength of Mary 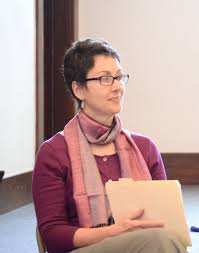 When I was in Senegal some years ago, we lived with Therese, a Catholic woman. A few months before our arrival, one of her sons had been killed in a traffic accident. Her grief was, of course, still raw. As we learned to know each other, in the course of time she showed me her bedroom and the altar where she prayed…to the Virgin. It was clear that praying to and with Mary was what was sustaining her in her pain. Cutting flowers from her garden each day and taking them to the altar was evidence of her devotion and adoration.

A few months later Therese invited me to join her on a pilgrimage during Holy Week. Of course I wanted to go. We went with a group of retired persons; our destination was a place where the Virgin had made an appearance, a place that had become a destination for hundreds, if not thousands, of people. Toward the end of the day we finally got to the site where Mary had been seen. There were altars all around, within the rocks of the landscape, semi-private spaces with mounds of wax. Clearly many prayers had been prayed here. The holiness of the place was palpable. Without waiting, Therese went to an altar, knelt and began to pray. I wanted to do the same…and did. But I remember an internal hesitance, “What will I pray? I don’t believe in praying to Mary. Is it wrong for me to kneel here? Should I confess to someone?!” But as I knelt, I began to experience Mother…the femininity and maternity of God. I was profoundly comforted…by Mary…by the familiarity of another woman. And then I understood Therese’s devotion—if anyone could understand her grief, Mary could. Of course Mary understood.

I envied Therese that relationship. And for the first time, I began to see and name the loss of the feminine, the female, in my Protestant, Anabaptist faith tradition. In a male-dominated world—our churches and theologies and orthodoxies have been formed and defined by men, and by the masculine. But we are beginning to see women. We are beginning to hear women. And as we see women—as we begin to value the feminine, the female, the maternal—as we see women, we also see Mary…we also see ourselves.

In the Anabaptist faith tradition Mary has essentially been invisible. It seems we only pay attention to her because she birthed Jesus. Beyond that, she’s a passive, docile, and insignificant character in the Gospel story. We don’t see her…not really. We haven’t noticed her feminine presence, teaching and guiding her son. In the group of disciples and followers of Jesus, we haven’t seen this woman, this woman who mothered Jesus. And when Jesus was arrested and on the cross, we see what the disciples did and didn’t do, but do we see this woman? Do we see Mary?

For many of us, Mary—as woman, mother, human being—is virtually unseen. Rather, her virginity is what matters: because if she were not a virgin, she would not be pure, and we can’t have Jesus given life in the body of a woman who has been defiled! So rather than seeing Mary, seeing the woman who gave birth to the Word of God, to the Christ Child, rather than seeing her, we argue about whether or not she was a virgin.

The one side argues that Mary was literally and historically a virgin. The other side argues just as passionately that virginity and pregnancy are biologically impossible. For the one side, Mary’s virginity is the foundation of faith…remove it and Christianity crumbles. For the other side, the claim itself undermines Christianity. Caught in this argument, we care more about whether or not she had sex than about who she is and how it is that God chose Mary to bring the Son of the Most High into the world. And Mary remains unseen, disembodied…reduced to a womb…reduced to sex.

When our focus is morality and sex, we lose sight of God. And when our eyes have lost their focus, we surely can’t see God at work in Mary’s life…or in our own lives. What does it mean that God’s son was born of a woman? Who is she? Unless we can let go of our preoccupation with literalism and sex outside-of-marriage and science, we won’t see Mary. We won’t see her profound presence in the Gospel story. Mary’s story is Good News…and in her story we find and tell our own stories. If we don’t see her…the woman, the mother…can we see and Jesus? If we don’t hear Mary, can we hear the Good News?

So what happens if we look at Mary? What happens if we see Mary—the young woman, the daughter, the fiancée—if we see the person in the story? In the story Luke tells, he gives some very specific details—details that matter, details that are the story. The first detail is that God sends Gabriel. The second, that God sends Gabriel to Nazareth. Once in Nazareth, he’s going to a virgin, the third detail…a virgin, promised in marriage to a descendent of King David. And finally, we hear that the virgin’s name is Mary. Do we see her?

These very specific details are more than accurate reporting for a historical account of what happened. These details are telling a bigger story, one that isn’t bound by history. From the start, from the first detail, we understand that this is a story about God, about God at work in the lives of human beings. This is a story about God, the Creator. But there isn’t anything spectacular here…no shock and awe. In fact, it’s the opposite. God sent Gabriel to Nazareth, a place of no significance, not big enough or important enough for anyone to know about or care about, a place that didn’t attract the attention of political or religious leaders. God was…God is at work…outside the systems and institutions of men. This is the first time Nazareth is mentioned in Scripture, the first time we hear about God at work in Nazareth. God is about to do a new thing.

In this off the radar…off the grid…place, God sends Gabriel to visit an unmarried woman, or, a virgin. Now I doubt that Luke or his listeners cared much about whether or not Mary has had sex. That Mary is not married means she does not belong to a man. But more than that—Mary’s virginity means she has not given herself to man-made social and political structures. That Mary is a virgin means she has not given herself to the domination of human systems of status and power and authority. It means that she is not controlled by the values and expectations and stereotypes of those around her. No, it is the Creator who has entered her, who is breathing new life into her.

This story that is beginning does not begin with Mary, does not begin with Joseph, it begins with God. Mary belongs to the kindom of God, not the kingdom of men. Because Mary is a virgin, no man—and no man-made institutions—can lay their claims on this child. This virgin birth…God creating with a word…bypasses and subverts institutions of domination and oppression.

When Mary received the message she was confused and distressed. Can we see her? Gabriel saw her…and her fear. In the face of God at work in our lives, before we understand what kind of message we are being given, before we know how to understand what is happening, we too are bewildered, stunned. When God begins to create something new in our lives, we are as perplexed as Mary was. No matter how much we may complain about life as we know it, when God comes to us with an invitation, it is surprising how often our fear keeps us holding on to the old…even if we are burdened by it….even if we are bound…too often we give in to our fear and hold on. But not Mary. After the initial storm had passed, she heard God whispering, “Don’t be afraid.”

And Mary said, Yes! God saw the grace in Mary’s very being…grace that gave her the capacity to receive this strange message, even if she did not understand it…grace that made her open and receptive to God creating new life in her, even when she was afraid. Such grace is nurtured by ready vulnerability and profound strength.

Receptivity and vulnerability are feminine characteristics. Unfortunately they are often mistaken for passivity and weakness. And too many of us—men and women—have been taught to seek strength and power…and shun vulnerability. Recently, in a group I was part of, we talked about what is expected of men and what is expected of women. The first thing each of the men said is that they live with the expectation that they should be strong…that they should not be vulnerable or weak, or appear to be vulnerable or weak. This belief is subtle…real…and oppressive…for men and for women. This kind of oppositional thinking keeps us from seeing the strength of vulnerability.

When we see Mary, really see her, we begin to understand the depth of her strength and courage. Her Yes! to God was a choice, choosing to live in the vulnerable position of putting God at the center of her life. Her Yes! put her in the uncomfortable and unrespectable position of being “owned” by God rather and by her husband. Her Yes! bound her to the Word of God growing within her…rather than binding herself to relationships and systems and expectations that would diminish her. Mary’s Yes! was a deep recognition that she—a woman, an unmarried woman—she too was created in God’s image, a beloved daughter of God—no matter what anyone around her said.

When we see Mary—the woman, the mother, our sister—we hear in the words of her song a deep wisdom and understanding of who God is and what it means to be human. And we know the strength and vulnerability that will be required of Mary. Mary sang, “My soul magnifies the Lord, and my spirit rejoices in God my Savior, for God has looked with favor on the lowliness of his servant.” Because of the new life the Spirit of God breathed in her, Mary knew…and we can know…that God comes to the lowly, is present in the lowliness. Her song is a fierce claim, singing God’s praise, knowing that she will not be defined by her social status or the values of the culture around her. Rather, her status and identity—our status and identity—are being always, first of all, being given by God. We are God’s chosen, God’s beloved. Who we are begins with God, with who God is.

If we don’t see Mary, the woman, the mother…if we don’t see or appreciate her femininity and maternity, her openness and vulnerability and receptivity…if we don’t see this woman, what will Jesus look like? The Good News is that we are all, women and men alike, called to give birth to the Word of God. Bringing God’s Word to life in our bodies and beings is an act of love, initiated by God who is love, God who is lover. Mary, the woman, understood that saying Yes! was giving herself to God…to God’s action, to God’s love in her life. Mary, the virgin, understood the distinctions between human and divine regeneration. Regeneration with God is about love…giving birth to Love. And she said Yes! May we also say Yes!