“On Our Way” together: Hundreds walk Kansas City streets praying for peace and reconciliation 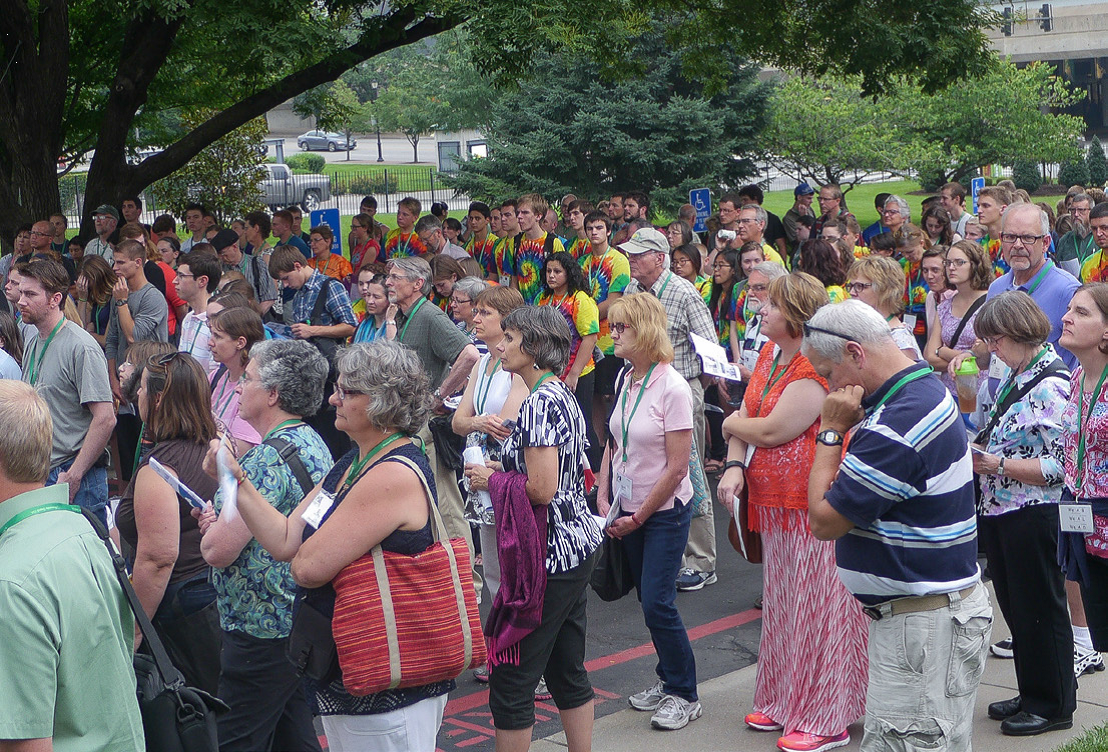 Mennonites crowded Kansas City streets for a prayer walk as part of the convention’s opening night festivities. Participants prayed for reconciliation among faith communities and for those impacted by racism, in addition to petitions for environmental justice and peacemaking throughout the world. Participants traveled a mile-long loop from Jefferson to Washington Street and paused and prayed at five locations throughout Kansas City: the Golden Dome of Immaculate Conception, the statue of Lewis and Clark and Sacajawea, the Kansas and Missouri Rivers, the Statue of Jim Pendergast, and the Kansas City Convention Center.

The event began with a reading of Dr. Martin Luther King Jr.’s “We Shall Overcome” speech, delivered by Erica Littlewolf, program administrator for the Mennonite Central Committee Indigenous Visions Center and Glen Guyton, chief operating officer of Mennonite Church USA. The speech, originally given four days before King’s death, was used as a reminder of progress and the hope that the work of reconciliation would continue into the future, said event organizers.

“We just want to start convention off right on a positive note doing something together — worship and prayer — letting the community know that we are here,” Guyton said.

“This is just one of many ways that people show integrity to the causes of racial justice and antiracism,” said Samuel Voth Schrag, executive board member for the Mennonite Church USA and pastor at St. Lewis Mennonite Fellowship. “This is just one small part of what I think is a larger call for the Mennonite Church USA,” he said. Schrag walked with youth from Bethesda and St. Louis area Mennonite churches to help raise awareness for the Black Lives Matter campaign.

“It is a good look at the church that I want to continue being in gathered together in prayer,” Yoder said.

“Mennonites have historically been a people about doing and not always good at cultivating stillness,” said Hannah Heinzekehr, Director of Communications for Mennonite Convention and co-planner of the event. She said that the event “is prayer with movement; it is trying to remind us that this is one more way of preparing for our time together, and we need it all.”

Heinzekehr said that placing the prayer walk before opening worship this year provided a way for convention-goers to focus on the convention theme, “On the way,” and the doctrinal statement,

Hundreds of convention participants trek up Washington Street on their way to the Golden Dome of the Cathedral of Immaculate Conception, Tuesday, June 30, 2015, in Kansas City, Missouri.