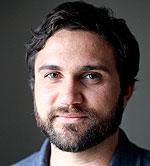 This post was originally shared on the Mennonite Church USA Convention website. Isaac S. Villegas is the pastor of Chapel Hill Mennonite Fellowship in North Carolina. He serves on the Executive Board of Mennonite Church USA and on the Governing Board of the North Carolina Council of Churches. These reflections were originally shared as part of a sermon given at the 2014 Hope for the Future gathering in Leesburg, Va. Luke 24, the text he reflects on here, is the theme scripture for the 2015 convention in Kansas City. This is part three of Isaac’s reflections; part one ran on Monday, the 14th  and part two ran on Thursday, the 17th.

This is odd. Doesn’t Jesus know his place? If he doesn’t, somebody should remind him, right? Somebody should let him know where he belongs, and where he doesn’t, before he gets himself in trouble, before somebody puts him in his place. Someone needs to remind Jesus of the facts: that this is not his house, this is not his dinning room table; he didn’t buy this bread; it doesn’t belong to him; he shouldn’t be giving it away. Who does he think he is?

He’s a guest, not the host. He’s a stranger. He’s a foreigner: dependent on the hospitality of others, dependant on benevolent hosts, dependant on charity, and on good-hearted people, like Cleopas and his friend.

But Jesus forgets all of this. He ignores all rules about how guests are supposed to act: the unspoken rules, the social norms, and the cultural norms.

When Cleopas and the other disciple invite Jesus to stay with them, Jesus takes a seat at the head of the table and acts like the host. He takes their bread and feeds them with it, and he never asks permission.

This story is about power. Hospitality is always about power. And Jesus messes with the rules about who is supposed to give and who is supposed to receive, which are the fundamentals of power: who has the resources, who is allowed to decide how to use them, who do you ask if you want some power, and who is trusted enough to receive it?  Who is trusted enough to be invited to the table? Who are the people deserving enough to receive hospitality? Who are the people that need a handout?

At the table, when the guest becomes the host, the world changes for Cleopas and the other disciple. Their eyes are unveiled. Their vision unmasked. It’s a moment of apocalypse, where the old world falls away and a new world begins. “Their eyes were opened,” it says in verse 30, “and they recognized him.”

When we invite Jesus into our lives, he will act as if our lives are his, as if our house is his house, our table his table, and our food his food. And then do you know what he’s going to do? He’s going to give it all away to his friends, to strangers, and maybe even to some of our enemies.

If you think you own the house or the bread, then you probably shouldn’t invite Jesus over for supper, because if you do, he’s going to take it from you and he’s going to give it all away.

He’s the worst kind of guest, and that’s good news.