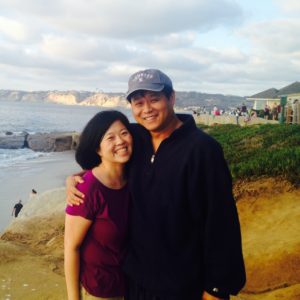 Hyun and Sue Hur are co-directors of ReconciliAsian, a peace center in Los Angeles that encourages local Korean immigrant churches and other ethnic churches to explore what it means to participate in God’s ministry of reconciliation locally and globally. They are also co-pastors at Mountain View Mennonite Church, a small multi-ethnic church located in Upland, California.

Since the 1970s, Korean leaders across denominations have worked together towards peace, especially for the peace and reunification of the Koreas. In an effort to revive and affirm the peace movement amongst Korean Christians, 20 church leaders from five denominations met  March 9-10, 2015, in Atlanta, Georgia, to launch the Korean Ecumenical Peace Network in North America.

These leaders saw the need to create a peace and justice based pastoral ministry environment among Korean immigrant churches and to mobilize people to participate in a peace movement for the Korean peninsula.

I was pleased to join this conversation as the Mennonite participant.

As their first collaborative initiative, the Network wanted to prioritize training local church leaders to run peace schools in their respective congregations. As a peace center that equips Korean church leaders to serve in ways that promote unity, forgiveness, and peace, ReconciliAsian was invited to organize and facilitate a three-day peace school at Flushing (New York) Korean United Methodist Church from October 12-14, 2015.

The three day Peace Discipleship School covered various topics around the theme of “Living Peaceably Together.” Pastor Sunghwan Kim of Gardena Presbyterian Church began the conference by laying the theological foundation of “Peace and Justice in the Bible.” Pastor Taehoo Lee of Uber Street highlighted the plight of the poor and what it means to be a neighbor living in the poorest part of Philadelphia. I focused on the importance of restorative justice when living in community. Sunghoon and Soonok Park, a Korean couple from the Bruderhof community in New York, led a seminar on “Education that Restores” about disciplining the children in the community. The three-day peace school was well received by the 25 participants, Korean-American pastors and church leaders from Korean United Methodist Church, Presbyterian Church USA, Disciples of Christ, and other independent churches.

Although the gathering was small, the leaders came from Flushing, Boston, New Jersey, Chicago, Indianapolis, and Atlanta.

Many confirmed the strong need for such training and wanted to implement similar peace discipleship school model in their respective local congregations.