A Mennonite’s Brush with a Yeti Scalp

If you’re like me, you probably don’t associate Mennonites with yetis.  Mennonites and four-part singing, delicious pies, and peace witness?  Yes, absolutely.  But Mennonites and yetis?  Not so much.

Yetis, also known as abominable snowmen, are hairy, ape-like creatures that have been seen by Nepalese and non-native mountaineers alike in the Himalayas.  Thought to be over six feet tall when standing, yetis reportedly resemble large orangutans or bears, with shaggy red-brown fur and a propensity to walk on all fours.

As you might have guessed, there are no reports of yetis in Mennonite communities or congregations.  Why, then, does the Mennonite Church USA Archives have among its holdings a letter about a close encounter with a yeti scalp?

On December  5th, 1960, Lena Graber (1910-2003) dined with the mountaineer Sir Edmund Hillary and his party in Kathmandu, Nepal.   Graber, a Mennonite missionary nurse, volunteered to serve with the United Mission to Nepal in 1957.  An interdenominational and international Christian mission, the United Mission to Nepal established the Shanta Bhawan Hospital in Kathmandu, and Graber helped build its nurses’ training program. 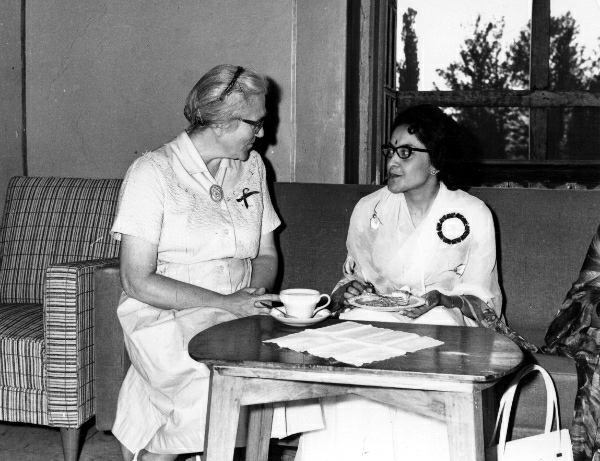 Mennonite Missionary Nurse Lena Graber and Queen Ratna of Nepal, [1963]. Lena Graber served as a missionary with the United Mission to Nepal from 1957 to 1969.

Hillary was traveling with zoologist Marlin Perkins, journalist Desmond Doig, and Sherpa leader, Khunjo Chumbi, who possessed a Yeti scalp.  In her letter to her sister, Lena Graber writes:

“They are leaving for the USA along with the Yeti scalp (so they say) and the [Sherpa] head man who is guarding it, to make an investigation to see if it is really a real scalp or a fabrication.  So [Hillary] passed the scalp around and we all got to handle it and look at it. (…) Sir Edmund gave a 5 minute talk about the Yeti scalp and how they will take it [to Chicago] to examine but that they have to take it back in the village within a certain number of days.  So they are rushing home and then will rush back.”

The findings of scientists at Chicago’s Field Museum validated Graber’s skepticism regarding the authenticity of the yeti scalp; it was determined to be made from goat hair.

During her twelve years in Nepal, Lena Graber encountered “all kinds,” from religious mystics to peasants.  In 1963, she even met with Queen Ratna of Nepal.  But most important, she healed the sick in Kathmandu and trained some of the first Nepalese nurses.

Graber’s brush with Sir Edmund Hillary and the yeti scalp is but one example of a Mennonite encounter with a prominent historical figure.   If we look beyond the glamor of Mennonites rubbing elbows with celebrities, we usually uncover some lesser-known facts hidden behind the famous stories.  In this case, we deduce that Hillary was not simply a mountaineer; he was a man with a heart for the Nepalese people.  A little research uncovers that Hillary was a philanthropist who built schools and hospitals in Nepal and ultimately founded the Himalayan Trust.  And he took the time to dine with missionary nurses who served the people he loved.
-Quotations and image from the Lena Graber Papers, 1944-2003.  HM1-380.  Mennonite Church USA Archives – Goshen.  Goshen, Indiana.