Home / Menno Snapshots / A Papal Encyclical, a Mennonite resolution, and the relevance of Anablacktivism
Aug 05 2015

A Papal Encyclical, a Mennonite resolution, and the relevance of Anablacktivism 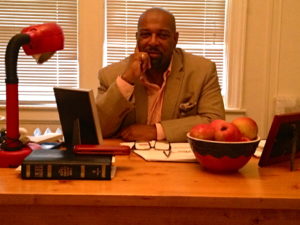 LAWRENCE JENNINGS of Infinity Mennonite Church in New York City has been involved in community and economic development for more than three decades. Since 2013, he has been affiliated with GreenFaith, first as a Fellow, and currently as a lead organizer of the new Restoration Nation faith communities/green jobs initiative. A member of the Thomas Berry Forum for Ecological Dialogue at Iona College, he was one of the key organizers of the People’s Climate March faith contingent, and has ongoing involvement with the People’s Climate Movement, the organizing body that took shape after the March. In these involvements, as well as his work with The Groundswell Group and Moral Mondays, he works closely with faith communities and inner city and “frontline” groups that often are overlooked or excluded. He authored the Open Letter from African American clergy on Climate Change as part of the “Our Voices” campaign, and is on the Steering Committee of Interfaith Moral Action on Climate, both of which aim to encourage people of to speak out about the moral and scientific urgency of the environmental crisis. Lawrence was asked by GreenFaith to write a response to the Pope’s newly released environmental teachings from the Anabaptist/Mennonite perspective. It will appear in two parts.  Below is the first.

Only hours before the Vatican released Laudato Si, Pope Francis’ recent ecology encyclical, a young white man murdered nine black people inside their Charleston, South Carolina, church. To my profound dismay and disappointment, American environmental groups, churches and politicians proceeded with pre-­planned responses to the Encyclical without so much as even passing acknowledgement of the horror in Charleston.

I suppose that’s not surprising, because the prevailing, sadly narrow view of “the environment” doesn’t encompass racism and violence and poverty and mass incarceration and police brutality and failing schools and … But that must change. It is vital that we consistently acknowledge and address the full scope of what people are affected by and react to – what they experience in the course of their daily lives.

Far too many of our brothers and sisters remain disregarded, marginalized, and patronized by “do-­gooders” who act like they have all the answers.

In that respect, the church and the environmental movement have something in common: We don’t always listen and, when we do, we don’t always understand what we’re hearing. Moreover, the impulse to be prescriptive or absolute can be detrimental to establishing productive, honest communication.

Pope Francis calls for an “integral ecology” that both responds to human needs and cares for the natural world: “A deep sense of communion with the rest of nature cannot be real if our hearts lack tenderness, compassion, and concern for our fellow human beings.” Those are piercing words. And they are true.

And I am convinced that we Mennonites need to speak and act with the same clarity and boldness that Pope Francis exhibits in his ministry.

In recent months I’ve been thinking a lot about the approach to faith that theologian Drew G. I. Hart calls “AnaBlacktivism”: a combination of Anabaptism, Black church/liberation theology, and activism. His thinking resonated with me immediately – and all the more so, after serving as a delegate at the most recent Mennonite Church USA Convention. As we met together, the funerals continued for the Emanuel AME victims, and nine Black churches in the South were burned down. The African American Mennonite Association brought forward a Resolution that was embraced by the delegates. The introduction to Expressions of Lament and Hope closes with this exhortation: “Let us model for our neighbors, communities and the greater global community more than just commitment to non-­‐resistance and peace but also a call to nonviolence.”

But what exactly does that mean to us? And what do people outside our church doors know about what we believe and how we live?

We believe that as followers of Jesus, we are called to be manifestations of the living Gospel, God’s representatives on earth, and stewards and caretakers of all of creation. Taking seriously the call to care for all of creation means that we do not have the luxury of being “the quiet in the land.”

The political discourse is too raucous, the needs are too great, and the well-­being of our planet and its inhabitants is being compromised at an alarming rate.