On Saturday, April 18, a delegation of 13 leaders from Pacific Northwest and Pacific Southwest Mennonite Conferences and other leaders from across Mennonite Church USA arrived in Bethlehem for the first night in a 10-day Come and See learning tour to Israel / Palestine.

Throughout their travel we’ll post updates, pictures, and reflections from the groups activities. 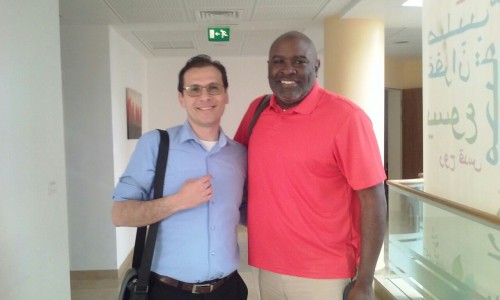 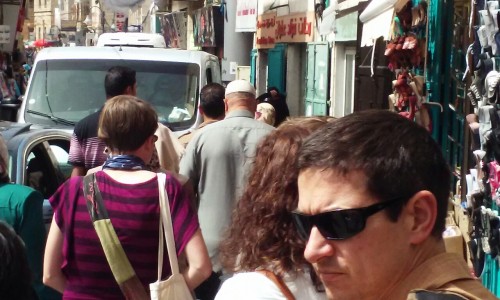 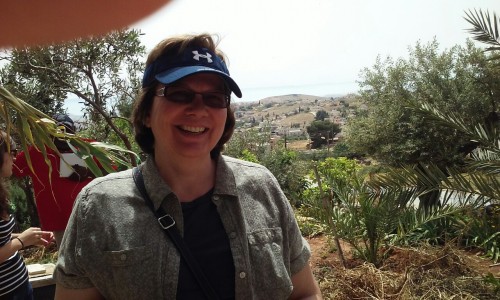 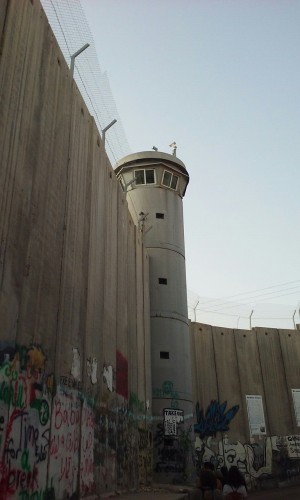 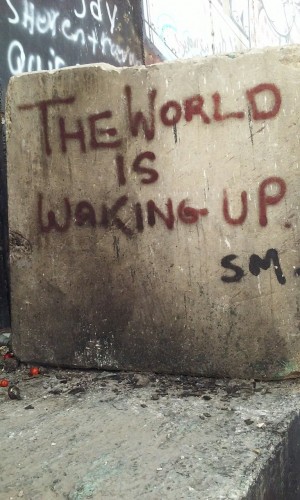 Graffiti on the wall 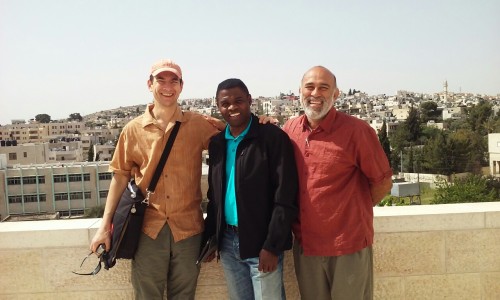 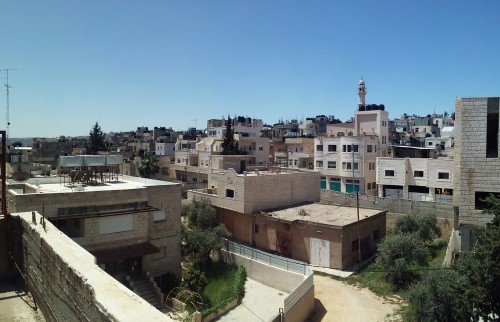 View from inside Aida Refugee Camp 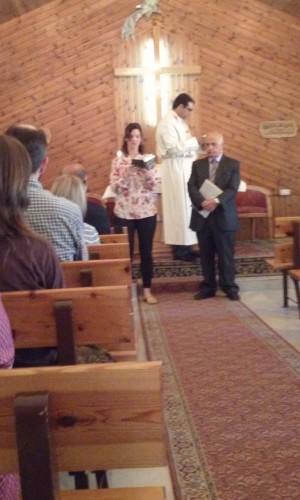 Be sure to check back for updates! 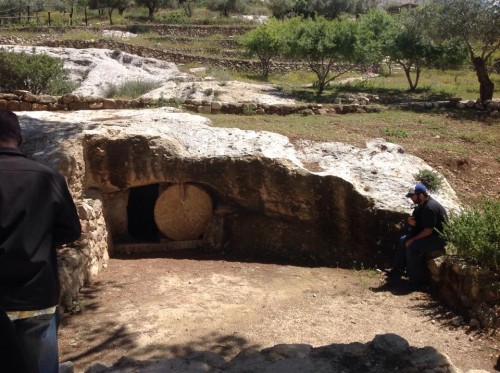 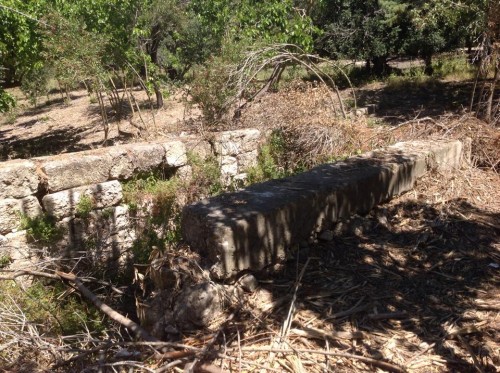 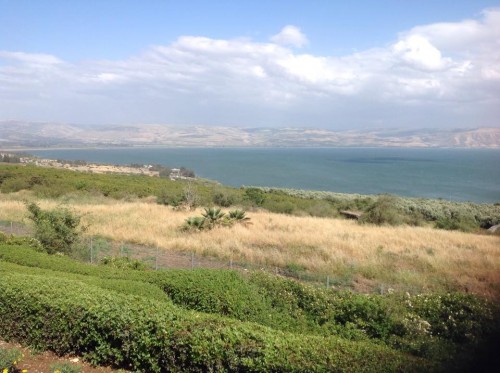 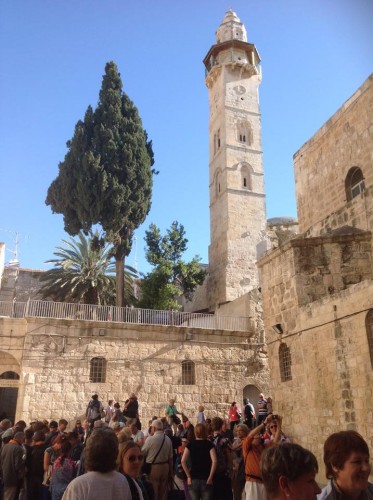 Mosque of Omar, from the square outside the Church of the Holy Sepulchre 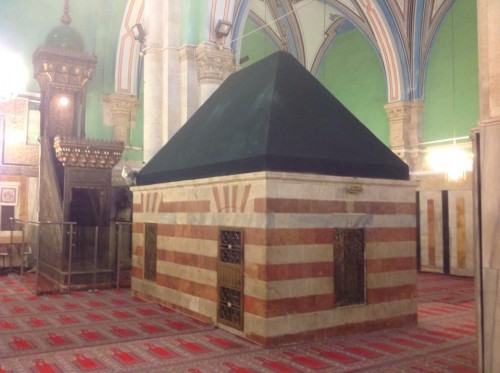 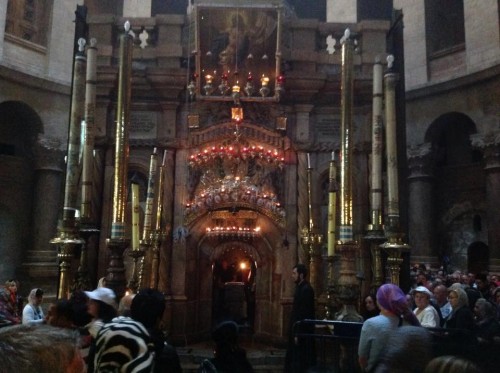 Jesus tomb in the Church of the Holy Sepulchre 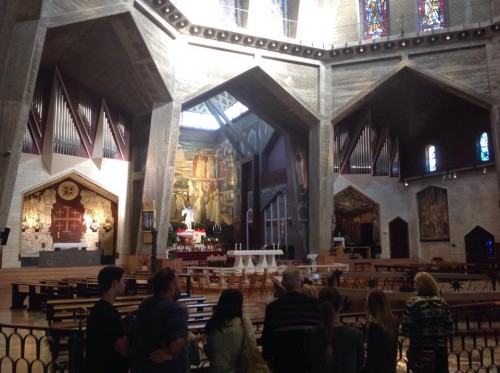 Inside the Basilica of the Annunciation, Nazareth 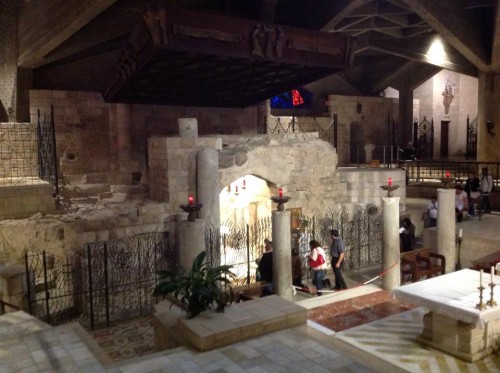 Grotto under the main level of the Basilica. Thought to be the place where the Angel Gabriel told Mary that she was going to bear a son. 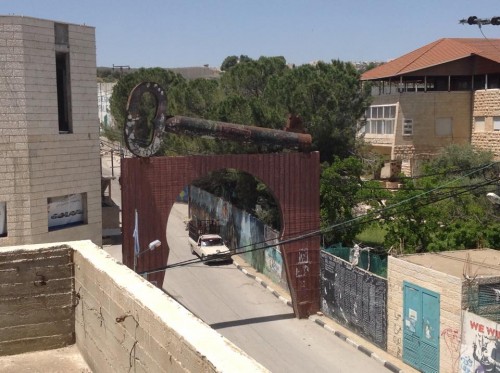 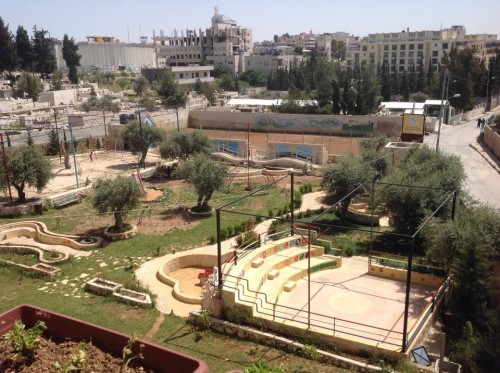 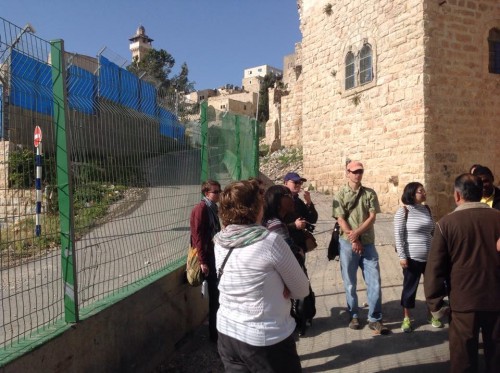 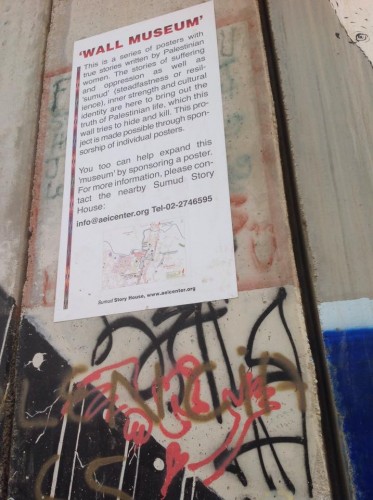 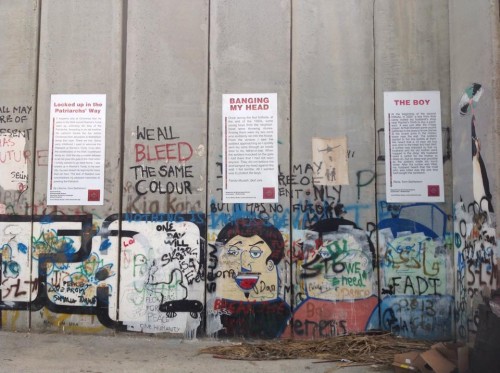 There is a story that I can not shake from my mind. It’s from Salah from the Lajee Center in Aida Camp. Aida Camp is one of three refugee camps located in Bethlehem. Salah introduced himself to the group. He shared that he has three daughters and that his wife is pregnant. The group of us congratulated Salah on the news. Then Salah said this, “My seven year old told me that she hopes that baby is not a boy. Because if so, she won’t have much time with him.” Those comments quieted the group. Salah went on to talk about the Oslo Accords, but I kept thinking about the words of his daughter. I kept thinking about my own son. My son is four-and-a-half years old. He is a blond, blue-eyed, middle class boy who is a citizen of the United States. I do not worry about “not having much time with him”. My son is growing up in a world where he is privileged because he is white and is a citizen of the United States. My family just happens to live in the United States. Salah happens to be a Palestinian. If Salah does indeed have a son, this son of a Palestinian refugee, will most likely spend time in jail, be harassed by Israeli soldiers and people in the West will think he is terrorist. If I think about this too long, I become anxious and my heart cries out to all the mothers and little boys who are terrorized under the occupation. When I get to this point, the words of Violetta Khoury (Sabeel Nazareth) come to mind, “it’s not a choice to work for justice and peace, it’s an obligation.”  Her words give me strength and hope that will be a time when a Palestinian boy can be as carefree as boy from Oregon. Let us all do our part in order that it may be so.

The second day of the tour started out badly. The heaviness of the day’s tour along with unpleasant stories I heard caused me to toss and turn all night without my much needed rest. I fervently and desperately prayed to God for an answer to the lack of peace in Israel and Palestine. Even still, my nightmares retold the horrific stories of Palestinian suffering. I vividly recall falling off of the bed at one point only to have the bedside dresser stop me from landing, with a thud, on the floor of my hotel room.

I awoke. My tired red eyes and ringing ears were still frozen on the stories of suffering from both Christian and Muslim Palestinian Arabs living in Israel which they had shared with us the previous day. I sat up on my bed and looked eastward through the window. The view of both churches and mosque minarets co-existing peacefully on the landscape sent shivers down my spine; because it did not translate into peace in the hearts of the many individuals who frequent these two places of worship.

My prayers from the night before had been strongly marked by just one expectation. The expectation was for peace and hope for the oppressed. The elusiveness of this expectation seemed so tangible that hunger fled and I skipped breakfast that morning. In my observation few people around the world have suffered more constant despair, hopelessness and daily oppression in the last 50 years than the Palestinians, Christians and Arabs living in the state of Israel.

The various peace accords and agreements reached by International Communities has not led the conflict anywhere but to the multiplication of pain, violence and wars. In the midst of observing and assessing this dire situation, I chose to look unto God. In this spiritual exercise and action of seeking the face of God for a lasting solution, I found hope in a hopeless situation. As I read the bible, I found that everywhere in the scriptures we are called to pray for the peace of Jerusalem. Even Christ our Lord and Savior wept over the city during his lifetime. Psalm 122:6, Luke 19:4, 41-48. As we continued the tour I was deeply troubled by the immense suffering and painful stories of unjustified pains afflicted on the Arab Christians. For a lasting resolution, I prayed even more in my hotel and the Lord gave me Isaiah 62:1-12 to mediate upon.

That is when I knew that the Lord wants us to give voice to the suffering of our Palestinian brethren and to take action in seeking peace, justice and reconciliation between the Israeli and the Palestinian people. I also believe the greatest action that we can take is to pray unceasingly to our God who knows that our human efforts and that International Community alone cannot bring lasting peace. We need to turn to Him with sincere, heart-rending prayer. When we do, then what is impossible for all the nations of the world will reveal itself as a piece of cake for our God.

All slumbering believers of peace gospel need to wake up from their napping and call upon the Lord in fasting and prayers until God rains down righteousness on the surface of the earth which will cover Jerusalem and all of the regions that surround it.

I recently had the opportunity to participate in the “Come and See” tour, sponsored by Mennonite Church USA and MCC. Through this experience I laughed and cried, felt anger at the injustice I saw, but also felt peace and joy as we met with people who were so steadfast in their work and so full of love and compassion.

The injustice the Palestinians endure each day moved me to tears. We toured refugee camps, saw demolished homes, witnessed checkpoints and saw many soldiers. The wall was always there, towering between people and cutting off any chance of relationships.  We heard of children being imprisoned, night raids on villages, the lack of water, infrastructures and education.

But through all the pain, I saw hope.   We met with partners of MCC and others working for justice. Groups such as Applied Research Institute of Jerusalem and Palestinian Hydrology Group working with farmers to provide innovative ways to grow crops such as rooftop gardens, filtering waste water and building concrete pools to store water. We also met with Christian Peacemaker Teams, Operation Dove, Sabeel, Kairos Palestine, Rabbis for Human Rights, as well as people in the villages.

Through it all, we heard a message of love, forgiveness and peace. We heard over and over the words of Jesus who commanded us to love our enemies and resist evil through non-violence. I was so touched by the strength and compassion of the Palestinians, from Muslims, Jews and Christians to work for justice, human rights and peace through nonviolent means. We prayed outside prison walls and by the Sea of Galilee.

I was also saddened by the message we heard that the United States plays a big part in the conflict. As long as our government sends arms to Israel and refuses to acknowledge the abuses and the breaking of International Law, things will not change. I will spread the message of what I saw and continue to pray for both Israel and Palestine – that God’s will might be done on earth.

The Learning Tour to Palestine was an eye-opening experience in many ways.  Despite going into the trip feeling that I had a pretty good handle on the “facts” of the conflict, it was a completely different experience to see and hear the reality of it first-hand.

One thing that struck me was the Wall.  Officially called the “West Bank barrier” by Israel, approximately 500 km of the planned 700 km route dividing Israel from the West Bank has been completed.  Coming from southern Arizona, a separation barrier is unfortunately an all too familiar sight, encountered while driving into Mexico, visiting border towns, and even from afar while on hiking trails.  There are certainly many parallels between Israel’s “separation wall” and our own country’s border wall.  The rationale presented for both barriers plays on the fear of those on the other side and promises of security by keeping the “other” out.

It quickly became apparent from hearing stories from Palestinians and seeing with our own eyes that the West Bank wall has a purpose far beyond simply keeping out suicide bombers.  The route of the wall does not strictly follow the boundary between Israel and the West Bank, but strategically deviates in many areas with the effect of maximizing Israeli territory while cutting off and isolating Palestinian villages.   For the Palestinian people living in these areas, this has caused much hardship and suffering as they are often subject to the whims of the occupying military force for travel and movement related to day-to-day activities.  We heard stories of farmers losing an entire season’s crop due to being denied access to their fields, a man in the midst of an acute stroke having the ambulance turned away leaving him paralyzed due to lack of medical care, relatives who had not seen each other for 10 years since the construction of the wall, where before it was a 20 minute drive to visit, and many more.   It became very clear why many Palestinians refer to it as the “Apartheid Wall.”

It made me think about walls.  About the injustices associated with our own country’s border wall.  About how I sometimes respond to conflict in my own life by throwing up a wall.  About how we will choose to respond as Mennonite Church USA to questions about how to relate to people who to many seem different or “other.”

Gracious God, may we see the day when walls are no longer used as tools of separation, violence and oppression.