Cultivating relationships with the ELCA 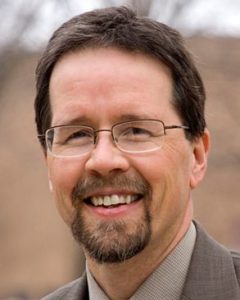 John D. Roth served as a representative of Mennonite Church USA on a series of ecumenical dialogues with the Evangelical Lutheran Church in America (2001-2004) focused on the “condemnations” of the Anabaptists in the Augsburg Confession of 1530. He also served as a representative of Mennonite World Conference on the Lutheran-Mennonite International Study Commission (2005-2008) that resulted in a service of forgiveness and reconciliation at the Lutheran World Federation assembly in Stuttgart, Germany in 2010. In August, Roth represented Mennonite Church USA as an ecumenical guest to the churchwide assembly of the Evangelical Lutheran Church in America (ELCA). This blog post is a shortened version of his report.

On August 10-12, 2016 I was privileged to attend the 2016 church wide assembly of the ELCA in New Orleans as an ecumenical guest representing Mennonite Church USA.

As always, the generosity of welcome by the ELCA to ecumenical and inter-faith guests is humbling — clearly, ecumenical hospitality is a very significant part of their denominational identity.

The dominant mood in previous assemblies of the ELCA that I attended was fraught with debate surrounding same-sex marriage. Since a crucial vote at their Minneapolis assembly in 2009 — which made it possible for all ELCA synods to celebrate same-sex marriages (and for the ordination of pastors who were in committed same-sex relations) — subsequent assemblies have had a lingering shadow of grief and frustration. At this assembly, however, it seemed as if the heaviness of those debates had lifted. A report that the ELCA had gained as many new congregations in the past three years as it had lost met with vigorous applause.

At the same time, however, the painful reality remains that two major groups have broken off of the ELCA in the past eight years. For these reasons — along with the more general decline in church membership in North America — the ELCA today (3.1 million baptized members) is 33 percent smaller than it was at its beginning in 1988.

One clear theme of the conference was an acknowledgement of the ELCA’s failure to reach its goal – announced in 1988 — of having 10 percent ethnic/minority members by 2000. The denomination has not only failed to meet that goal, but a recent Pew study showed that the ELCA was the “whitest” mainline denomination in the U.S.  At a worship service I attended, James F. Philip, pastor of Our Redeemer Lutheran church in Washington D.C., gave a powerful sermon that named the racism of our society and churches in a very clear, direct way. Like Mennonite Church USA, the ELCA is clearly struggling to bring its intentions into line with the ballast (and millstone?) of an inherited ethnic and cultural identity (I noted frequent, casual references to German, Norwegian, Swedish ethnicity).

The highlight of the delegate session was an affirmation of the work of a U.S. Lutheran-Catholic Task Force that commended to the ELCA a booklet called Declaration on the Way: Church, Ministry, and Eucharist, which summarizes the theological points of agreement between Lutherans and Catholics. Clearly, ELCA members feel the separation with Catholics very deeply (especially in the Lord’s Supper), and see this document as a step in the direction of church unity.  Ecumenical guests were introduced on stage, and then asked to remain on stage as witnesses to the vote to commend these documents (which passed by a 99.5 percent majority).

Another significant moment was a greeting from Martin Junge, general secretary of the Lutheran World Federation (LWF).

Junge introduced the upcoming commemorations of the Reformation in Europe by noting that the reconciliation service with Mennonites in 2010 pointed the way for how the LWF wanted to engage the commemorations — in a spirit of humility and with the goal of reconciliation.

In private conversation Junge noted again how much he appreciated spending time among Mennonites at the Mennonite World Conference assembly in Harrisburg, Pennsylvania last summer.

The experience reminded me again of how significant these relationships are, perhaps especially when we are hurting as a body and are tempted to retreat to a crisis management mode or a focus on internal issues. I strongly believe that our health as an ecclesial body is linked to our readiness to cultivate friendships (fellowship, service, theological reflection, prayer) with groups beyond ourselves.

Mennonite Church USA is only one part of the Body of Christ — we need to be in active, intentional communication with brothers and sisters beyond our own congregations, conferences, and denomination if we are to experience the fullness of that Body.

I hope very much that we can continue to make good on the commitments we have made to the ELCA (and via Mennonite World Conference to the LWF).