Doctrine of Discovery series: In spite of all this …

Sarah Augustine is the co-director of Suriname Indigenous Health Fund, a private international charity, and Professor of Sociology at Heritage University where she is also the Director of Student Spirituality. This is her last post in a special blog series on the Doctrine of Discovery.

Over the past several months, I have written a series of essays about the Doctrine of Discovery, a body of laws and polies justified by Christian doctrine that continue to dispossess Indigenous Peoples of their traditional homelands around the world.

When I began working alongside Indigenous Peoples in Suriname, South America eleven years ago, I responded to a desperate request for help from one woman, an elder named Dina whose home had been burned, her garden bulldozed. Her situation and her insistence moved me from bystander to actor. I did not have any specific skills or training that prepared me to work in the arenas of international policy, international development or human rights. How would I know what to do or where to go?

I felt sure there were qualified people somewhere who could help Dina. Yet all the individuals I approached and all the institutions they represented, refused to help. 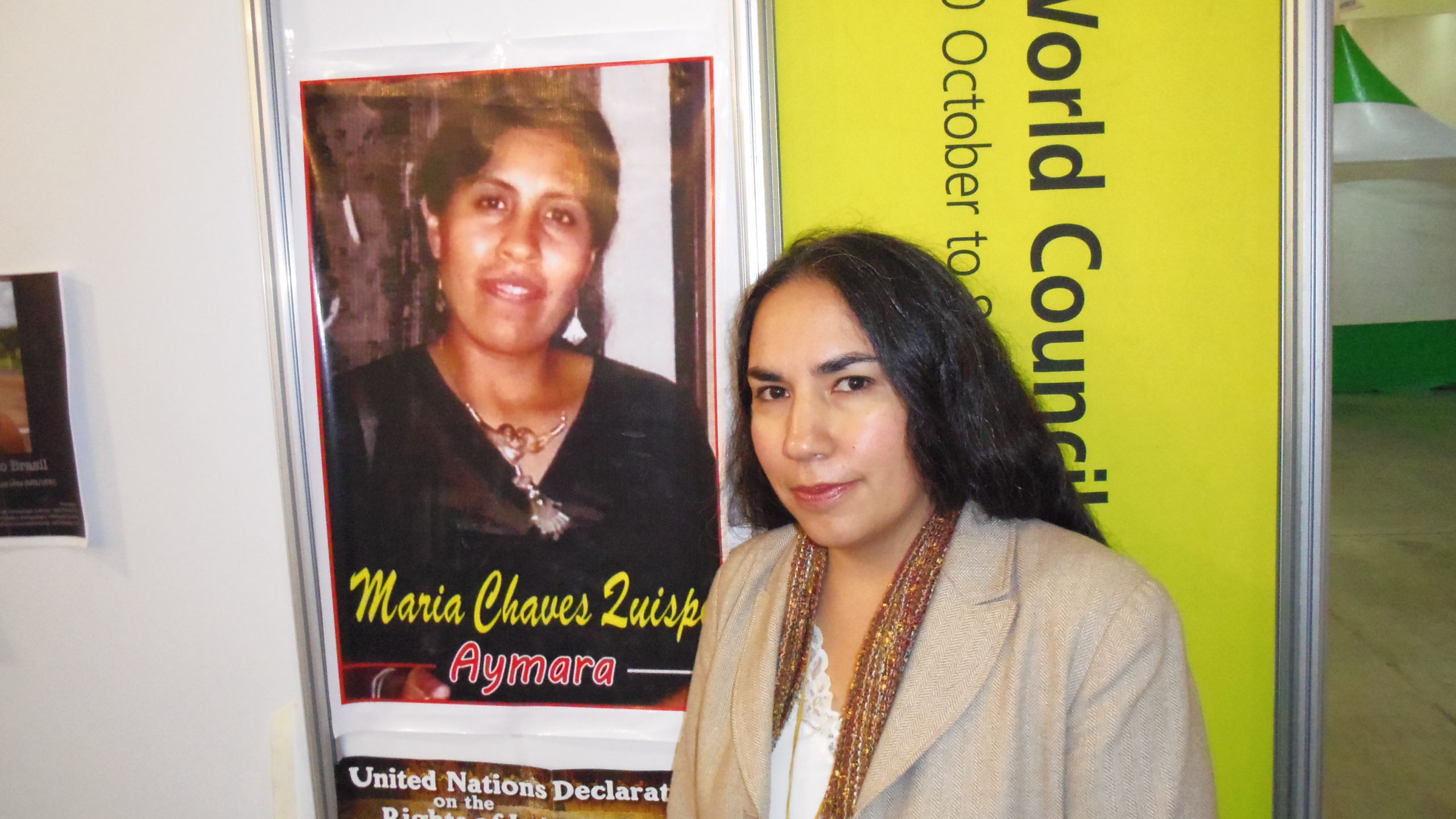 Sarah standing beside a poster of Maria

I didn’t begin working on the Doctrine of Discovery until many years later, when a woman named Maria asked for my help once again. Maria was a Bolivian woman who represented the Indigenous desk at the World Council of Churches. She explained to me that the plight of my friends in Suriname is the same for Indigenous Peoples the world-round. She asked me to write a theological response to the Doctrine of Discovery on behalf of the World Council of Churches (WCC), because she was too sick to continue on with the work and because I was the only person who responded to her request for help. I did not have any specific skills or training to prepare me to do what she asked of me.

I am not a theologian or pastor, I have never worked for a religious institution. Yet Maria would not let me go – she insisted that I could do what she asked because it was needed.

My greatest liability is not hard-heartedness or even ignorance. It is the fear that I am not qualified, somehow not good enough to do this work. My impulse as a member of an individualist and technical society is to rely upon experts to declare a situation worthy of interest or concern. Who am I to declare that people in Suriname face human rights abuses that threaten their very existence? I am not a diplomat, a human rights attorney or an expert of any kind. Let the Red Cross or a worthy relief organization determine what the facts are.

Let someone who is qualified take action. Who would want me for an advocate? I am an ordinary person.

Nearly a year ago, an elder from the Miskito People of Nicaragua contacted my husband and me asking for help to file a petition with the Organization of American States Inter-American Commission for Human Rights. His people are displaced, militarized, harassed and even killed in the current land-rush on their homeland. By the time he asked us for help, we had spent over a decade working with communities in Suriname and had in fact presented a hearing at the Human Rights Commission on behalf of the Wayana people.

It felt impossible to consider working with another community in a completely different region. Time and money are already stretched thin. My husband and I both work full time – he as a farmer and I as a teacher. We recruit volunteers, interface with institutions, coordinate human rights testimony and raise money late at night and on our days off. How could we entertain the request of yet another community? Yet this elder persisted. For nearly a year he called, sent text messages and emails. He had nowhere else to turn.

How do I know when God is speaking to me? I hear God’s voice most clearly in the person standing right in front of me, asking me for help.

It is humbling to engage in work that is ambiguous. Many days I am afraid that I will fail or at least embarrass myself. Yet I do not doubt the validity of my friends’ call to justice. Nor do I question Jesus example to stand with the powerless.