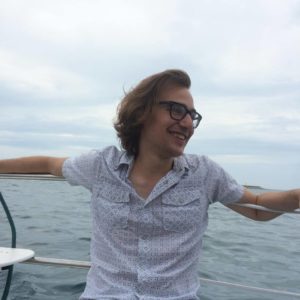 Zachary Martinez is the pastor of Sojourn Mennonite Church in Fort Collins and Greeley, Colorado. He lives with his family in Greeley, where he likes to garden, ride his bike and patronize local breweries and coffee shops. His work has appeared in The Mennonite, the Sun Magazine, and other publications.

The first hailstorm of the summer was on my birthday. I celebrated by watching nickel sized stones pummel my beloved garden. Most of these plants I’d cared for from seeds. I moved my dining room table, where I placed my seedlings, next to our glass door so the sunlight could reach them and watered them with a spray bottle. I rotated the flats everyday so the seedlings wouldn’t grow at an angle. As they got bigger, I replanted them in pots, moving them outside during the day so they could get used to the sun and back inside at night so they wouldn’t freeze. I spent hours with these plants before they were even in the ground. Then, I watched it all disappear in 30 minutes.

Gardens are an audacious enterprise in my neck of the woods. Northern Colorado has an arid climate, bad soil and is prone to thunderstorms. Anyone who tries to grow his own vegetables here is a betting man. But I’ve found gardening to be important. It grounds me and helps me practice patience and humility.

As someone who’s addicted to order and control, gardening offers valuable lessons about living in a world of uncertainty, where order and control are often beyond our grasp. Ben Gibbard says, “Every plan is a tiny prayer.” It’s true.

A month ago, my dad suffered heat stroke while riding his bike. He arrived at the hospital with a temperature of 107, unconscious and with multiple organ failure. Doctors and nurses prepared us for the worst. We expected it. Even if he was stabilized, his brain was in significant danger. Lasting brain damage is possible with a temperature of 104.

My dad had been in a coma for three days when he began, what doctors called, a “miraculous recovery.” He woke up, responded to commands, answered yes or no questions and recognized people he knew. This week, after 29 days in intensive care, he was transferred to an acute rehab facility to relearn how to walk, talk, feed himself, dress himself and perform daily tasks we take for granted.

Though my dad continues to recover, he won’t come through entirely unscathed. Extreme dehydration can cause muscle break down and poison the kidneys. In my dad’s case, this tissue break down was so bad that his right triceps, thigh and calf required skin grafts. He will have severe scarring the remainder of his life, and his arm may never be fully functional.

Miracle or not, my dad was also lucky. He was lucky to live in a time and place where life-saving medical care was available. He was lucky that his injuries were the result of recreation, and not, like so many in our world, from violence or hunger. We were lucky too because we had family, friends and faith communities who came to support us: bringing food, taking care of household chores and, most importantly, simply being there.

According to an old proverb, life sometimes gives you lemons, but life also sends you hailstorms. You can’t make lemonade with hailstones: you can only watch helplessly as they destroy things you love. Life’s like that sometimes. The world is like that often.

What peace we have, what hope we have, often comes from those who weather the storm with us.

It should be instructive for Christian communities that hope and peace often come from those around us. As Mennonites we affirm this idea in our Vision for Healing and Hope: as communities of Christ followers, we’re called exhibit grace, joy and peace in order that God’s healing and hope might flow through us to the world. I personally have believed this statement to be true in my heart, but it wasn’t until I was a recipient of this hope and peace that I understood its power.

Hailstorms, real and metaphorical, are common. When Jesus found himself the midst of a storm, he spoke peace and stilled the winds and waves. What does that mean for us? We may not have supernatural abilities, but we can bring casseroles, mow lawns and sit with people in pain and worry. For those of us who like control and order, it can be difficult admitting that the storm itself may be beyond us. When we feel dwarfed by the scale of some storms, it might feel inadequate to find hope in meals and yard work. But God’s transforming love is permeating, and it is found wherever kindness and compassion motivate people to share this love in their community.

This week I picked a tomato from one of the surviving plants. It was small and bruised, but it was a tomato none the less. It’s not always like that. Some gardens are destroyed entirely just as some parents don’t make it. Sometimes wars don’t cease, and sometimes aid doesn’t make it in time to save those affected by them. Sometimes injustice wins the day. It will be so until God’s kingdom is fully established. In the meantime, what else can we do but plant gardens in hope that next year might be a little brighter.