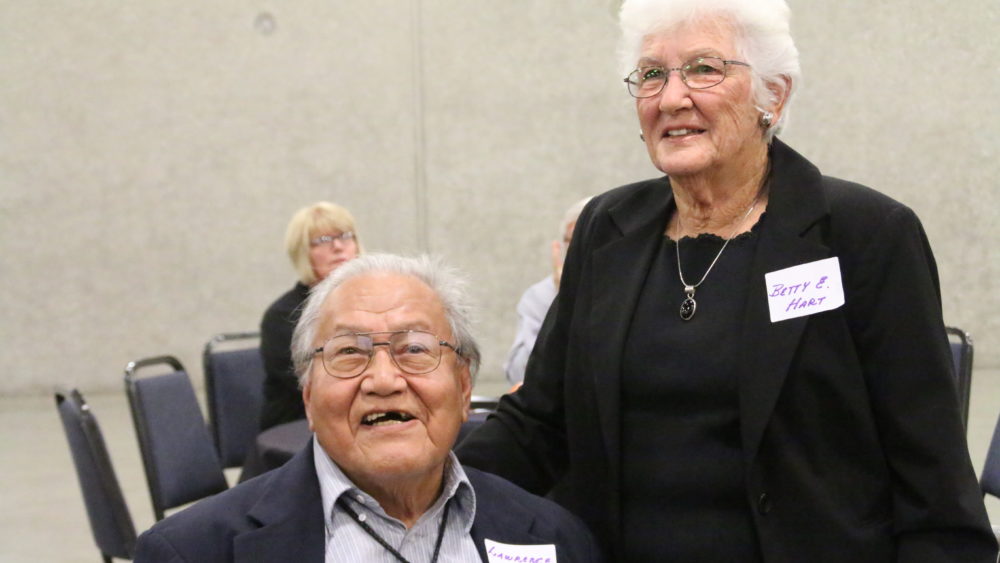 On Oct. 8, 2016 Mennonite Church USA together with MCC Central States hosted a gathering honoring  Lawrence and Betty Hart. People were invited to offer reflections, stories or other expressions, speaking to the profound impact of the lives and work of Lawrence and Betty. Iris de León-Hartshorn is director of Transformative Peacemaking for Mennonite Church USA. The following reflection is an adaptation of the words she shared at that event.

There are few people who have come into my life with the ability to transform my thinking in ways that respect who I am, providing me with a sense of my own identity. This is the story of my relationship with Betty and Lawrence Hart, who ignited my imagination about theology beyond traditional boxes and put me in touch with my theological “home” in my own personal thinking about God. 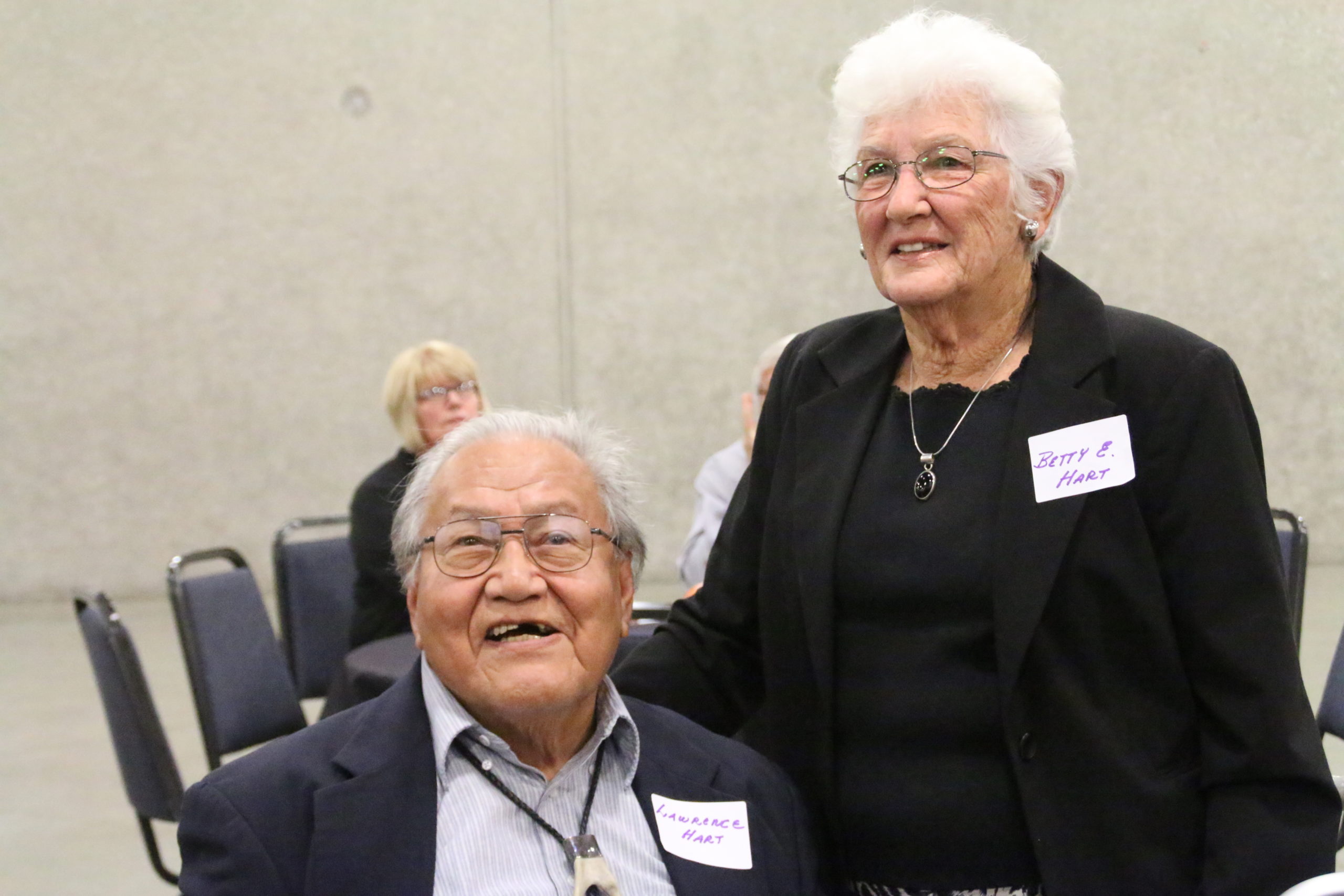 I first met Lawrence when he served (as one of the few people of color) on the MCC U.S. Board. He was quiet yet when he spoke, it was with deep meaning. As I got to know him and Betty, our journeys seemed to always cross. His work with Mennonite Indian Leaders Council and later Native Mennonite Ministries and my work with Mennonite Church USA, working with all the racial/ethnic groups, kept us in touch.

Lawrence too wondered about those things and in more depth.

What was it about Western culture that so encapsulated Christianity that people felt it was superior to other cultures’ experience with God? 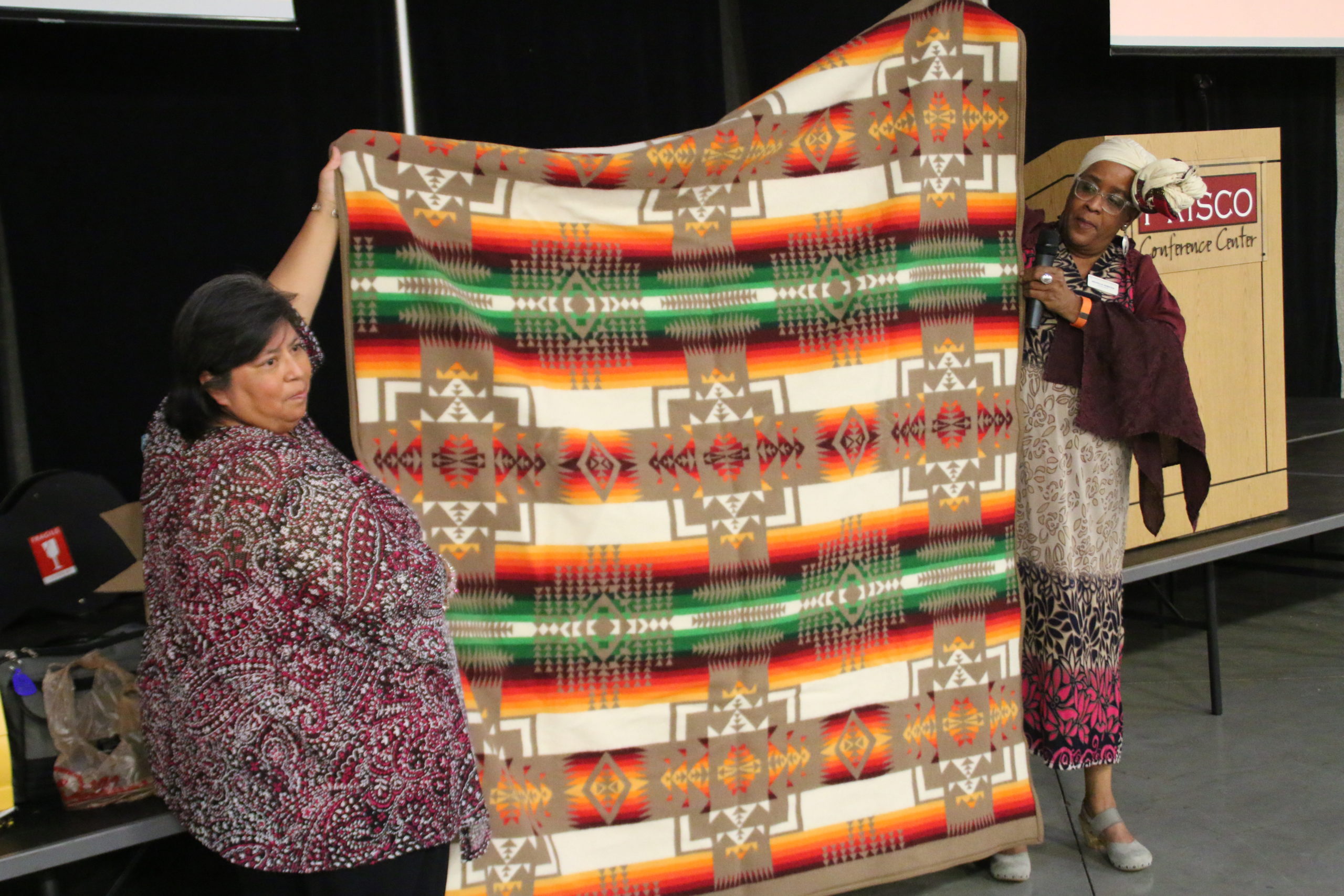 Encounters with Lawrence and the struggle to find meaning in Christianity’s disregard for Native American spirituality and people helped me to understand my own worldview and why I, at times, felt disconnected from my Christian faith. Values I found in indigenous thought helped me anchor my belief and thoughts about God. I found home, a place that would embrace my total being. When I see and talk with Lawrence, I encounter a person that not only knows but feels the great injustices done to the Cheyenne people in the name of Christ, but still continues to be faithful follower of Jesus. He always responds with such gentleness and grace. 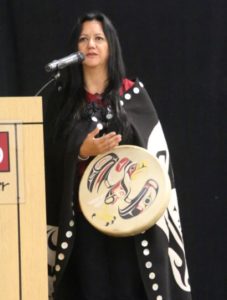 Cheryl Bear singing an honor song for the Harts

I remember one time we were at a Native Mennonite Assembly on the Hopi reservation under a tent in mid-July. That night before Lawrence spoke, a young man came up to the tent and engaged one of the leaders. This young man said he was a part of a Christian youth organization and wanted to say something to the group. The leaders allowed him to speak to the group. He introduced himself as the grandson of Kit Carson and proceeded to apologize for his grandfather’s participation in killing Native Americans. Then he proceeded to pray and in the prayer said that it was the responsibility of Native Americans, as Christians, to forgive his grandfather. I was stunned and angry, I couldn’t believe it. But I remember Lawrence was so calm and he and others spoke to the young man about what he had done. Lawrence spoke immediately after that incident and brought a sense of calm in the midst of hurt. He demonstrated why he is a Cheyenne Peace Chief.

May God continue to watch over you both. You have changed my life.