Home / Intercultural Transformation / Hope for the Future: Yes, but we also need “Action for Now”
Feb 22 2016

Hope for the Future: Yes, but we also need “Action for Now” 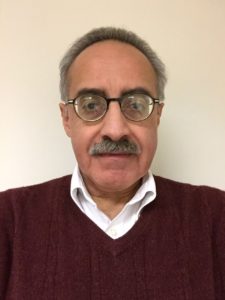 This is the fourth in a blog series from participants in Hope for the Future (HFF), a gathering of people of color serving in leadership positions across Mennonite Church USA. HFF gatherings began in 2012 and initially served to create space for mutual support among people of color in Mennonite Church USA institutions and agencies. In recent years there’s been an increased urgency to see change within our organizations — to see intentionality among our institutions to make space for people of color — culturally, interpersonally, systemically. In 2015, white leaders across the denomination were invited to the gathering as participants engaged in discussions around power. HFF 2016 focused on Human Resources: strategy, policy and best practices that together create interculturally competent organizations.

Richard R. Aguirre is the director of corporate and foundation relations at Goshen College. He co-directed the college’s Study-Service Term program in Peru (2013-2014) and before that was director of Communications and Marketing and director of Public Relations (2006-2013). Before coming to Goshen, he was a reporter and editor for newspapers in California, Texas and Oregon for 25 years and specialized in coverage of government, politics, minority affairs and civil rights. Richard is a member and elder of Berkey Avenue Mennonite Fellowship.  He lives in Goshen with his spouse, Judy Weaver, and has two adult children, Richard and Annie.

In a stirring call to action, Ervin and Elizabeth encouraged Mennonites to promote social justice, demonstrate God’s love to all, regardless of skin color, and to be faithful agents of reconciliation in the world.

And they didn’t let Mennonites off the hook, either, as they called on the Church to repent:

Given such a powerful plea, I expected Hope for the Future V in Hampton, Virginia, eight months later, to focus on that call to action.

I also expected conference organizers to push participants – people of color as well as white allies – to work closely together to develop concrete steps to move the Mennonite Church and its institutions forward.

After all, Ervin and Elizabeth had encouraged Mennonites to pray, but also to speak against and undo racial injustices within and beyond our communities, to advocate for justice in housing, employment and education and to help build a non-discriminatory criminal justice system. And they concluded their letter, stating: “We will not be silent.”

I believe Hope for the Future V was a missed opportunity, because it didn’t develop a bold and comprehensive agenda.

It pains me to offer this critique because I admire and respect the leaders who organized this and previous gatherings. I have attended all but one gathering since HFF began.

Previous gatherings, as the one this year, had many positive aspects – networking with people in the broader Mennonite Church; the opportunity to renew acquaintances and make new friends and to learn about the successes and challenges at other institutions; and to draw support from one another. I also appreciated rich worship opportunities.

But increasingly, participants are wanting more action. Last year in Fort Myers, Florida, in the concluding session they called for a number of action items including:

That feedback seemed to have been forgotten at Hope for the Future V.

Substantial time was taken studying and reflecting on Scripture, which while always important was not as necessary at a gathering where most participants already agreed on the need to advance diversity, equity and inclusion. People of color discussed progress toward diversity and inclusion at our institutions, commonalities and differences and why we had stayed at our institutions.

However, we had covered all of those issues at previous gatherings, so it seemed like plowing the same ground. And it wasn’t until the last afternoon session that we met with white allies and together discussed ideas to create workplace environments where diverse people can thrive.

The recommendations we eventually developed were rushed and the process disorganized and that was reflected in the closing reflections. While there was affirmation for many aspects, including the nurturing time together and the honest sharing, many participants described the gathering as lacking focus and direction. Others complained about the poor process, the lack of an opportunity to share the successes at their institutions, the limited time to work on substantive matters with white allies and the final hurried push to develop recommendations.

I concede that part of my disappointment stems from the fact that as a Latino, I have been working for social justice for four decades, and I’m impatient at the slow rate of change.

I’m also fortunate to work at Goshen College, which has a rich history of engaging difficult issues and promoting racial reconciliation and which has moved faster than some Mennonite institutions in pushing for an intercultural community. And yet, others at HFF told me they were also frustrated and disappointed at the gathering.

We also need a sharper focus, more joint work with white allies and the development of clear goals, strategies and tactics – with timelines and measurements – so we can track, document and assess how far we’ve come and how far we have to go.

And we need a name change.

While we always need hope, it’s time to accelerate efforts to build a more open and inclusive church.

Hope can take you only so far; we need “Action for Now.”