Last week, a reference question led me to this delightful tintype photograph of (old) Mennonite Church missionaries Jacob A. and Lina Zook Ressler. Jacob A. Ressler, a native of Lancaster County and pastor, volunteered to lead the church’s first international mission shortly after the death of his first wife. Ressler and his fellow missionaries, Alice and William B. Page, purchased land in Dhamtari, India in 1898 and established an orphanage. 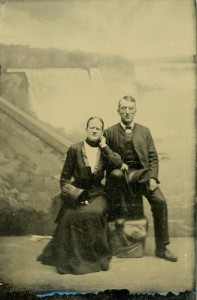 Jacob A. and Lina Zook Ressler

Lina Zook of Wayne County, Ohio was a single woman who worked at the Chicago Home Mission from 1895 to 1900.  In December 1901, Zook received an unexpected letter from Ressler. Only the first page of the letter survives, but it is clear that the letter contained a marriage proposal!  Over the next 18 months, the two carried out a long-distance courtship by mail. Their courtship letters are available in the Mennonite Church USA Archives – Goshen.

Ressler and Zook married on June 18, 1903, while Ressler was in the United States on a three month furlough. Their correspondence in the spring and early summer of 1903 overflowed with wedding details – setting the date, making Lina’s wedding dress, and wondering who knows about their plans to wed. Yet they never discussed a honeymoon.  After the Civil War, honeymoons had become common for American middle and upper class newlyweds. In fact, Lina Zook mentioned in her letters newlywed Mennonite friends taking trips “out East” and “out West” before settling into domestic life. But for Ressler and Zook, it seems that obligations to speak to various Mennonite congregations about Indian mission work took precedence over a honeymoon.

This tintype, however, suggests that the Resslers indeed made time for a brief honeymoon.  Jacob Ressler’s diary confirms an overnight trip to Niagara Falls on August 12, 1903, between visits to Mennonite communities in Ontario and upstate New York. The couple stayed in the Tower Hotel rather than overnighting with a Mennonite family, and they had this picture taken in front of a backdrop depicting the falls. The next night, the Resslers resumed their congregational visits.  Less than three months later, they sailed for India.

This tintype and the story behind it made me wonder:  was Niagara Falls a popular honeymoon destination for Mennonites and non-Mennonites alike? Given its proximity to Mennonite communities in Ontario, Ohio, and Pennsylvania, might Niagara Falls even have had special appeal for Mennonites? In addition to a convenient location, the Falls offered natural beauty and fewer worldly distractions than other contemporary resorts.

Do you have parents, grandparents or great grandparents who honeymooned at Niagara Falls? If so, please join their stories to the Resslers’ story in the comments below!