Learn Pray Join: Why Jesus would care about climate change 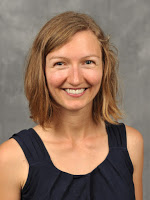 Christy Miller Hesed attends Shalom Mennonite Church in Newton, Kansas. She earned an M.S. in Sustainable Development and Conservation Biology and a Ph.D. in Anthropology at the University of Maryland. She most recently directed a research project that engaged rural churches and government agencies to promote coastal resilience to climate change on the Chesapeake Bay.

I have been an environmentalist for as long as I remember, but concern for the environment is not my only motivation for working on climate change. Climate change is fundamentally a justice issue. I have often been asked to explain to others what it means to be Mennonite, and my standard answer is: “We are Christians who focus on following Jesus’s teachings on peace and social justice.” Mennonites have long worked to serve the poor and to promote justice. As part of that work, we need to be doing more to address climate change, which will have a disproportionate impact on our most vulnerable brothers and sisters around the world.

Climate change is a justice issue for three reasons:

• First, not everyone is equally responsible for causing climate change. In general, wealthier individuals contribute more to greenhouse gas emissions than poorer individuals. A 2015 paper by Oxfam – Extreme Carbon Inequality – reported that the high-consumption lifestyle of the richest 10% of people in the world accounts for about 50% of global emissions.

• Second, not everyone is equally vulnerable to the impacts of climate change. Vulnerability to climate change has to do with risk of exposure to a given impact, as well as the ability to respond to that impact. Climate Change and Social Inequality – a paper published by the United Nations in 2017 – describes how those people who are less responsible for causing climate change also tend to live in places with greater risk and have fewer means for responding to impacts when they occur.

• Finally, climate change is a justice issue because those who are socially and politically marginalized are often excluded from decision-making about how resources should be distributed to address climate change.

Since 2012, I have been working with rural communities on Maryland’s Eastern Shore of the Chesapeake Bay, an area with long-held traditions tied to farming, “working the water” for blue crab and oyster, and Methodism. These communities are already experiencing impacts from climate change as tidal flooding and storm events become more frequent and severe. Many are quite vulnerable to these impacts as a result of their proximity to low-lying and exposed coastal areas. These vulnerabilities have been further exacerbated by declines in natural resource industries that have long been the backbone of their economy and culture. As a result, these communities have dwindling financial resources to draw upon in responding to climate change impacts. In addition, they also struggle to access the necessary government assistance to address these increasingly problematic environmental changes as rural, unincorporated communities.

Some of the most vulnerable in this area include rural African American communities that are located among low-lying wetlands. Many of these communities were settled around 1864 by newly freed slaves who had little choice but to build on less-desirable lands, which are now particularly prone to flooding and erosion from sea-level rise. The Congressional Black Caucus Foundation reported in 2004 that the greenhouse gas emissions of rural African Americans were 23% below the national average. Yet many of these communities are facing some of the most severe and immediate impacts from climate change. Racial disparities in income and career opportunities make it especially hard for them to prepare for, cope with, and respond to these changes.

Most of my work on climate justice has focused on giving voice to those who are experiencing climate impacts on the Eastern Shore. The State of Maryland has been proactively working to address climate change since at least 2007. Environmental organizations have also been promoting ecosystem resilience to climate change in the region. Unfortunately, rural Eastern Shore communities had largely been excluded from engaging in and contributing to this regional adaptation planning, which meant that their needs were being overlooked.

Colleagues and I began a project in 2017 – Engaging Faith Communities for Coastal Resilience – that aimed to address climate injustice by building stronger connections between government decision-makers and rural communities experiencing harm from climate change. The group we assembled was not accustomed to engaging with one another and had diverse views on climate change, conservation, science, and faith – all of which we had to carefully navigate in order to facilitate productive discussion on the topic of rural coastal resilience. We used an approach called collaborative learning to build mutual understanding, trust, and rapport among participants. Through project activities over the course of a year, the group began to understand how well-intentioned policies were not working for rural communities who face increasingly frequent flooding of their roads, yards, and cemeteries. In some cases, rural communities felt it was in their better interest to deny climate change in hopes of avoiding increased flood insurance rates, loss of property value, and more stringent environmental regulations. These regulations were perceived by some as a bigger threat to their beloved rural communities than the environmental impacts themselves.

We have a responsibility as Christians to work to address climate change, which unfairly harms our brothers and sisters around the world.

We all can work on changing our lifestyle to reduce our emissions by driving less, planting trees, or avoiding single-use plastics, but we must also work at walking with and advocating for those who are already experiencing harm from climate change to ensure that responses to climate change do not unfairly add to their burden.