Learn, Pray, Join: At the table with enemies 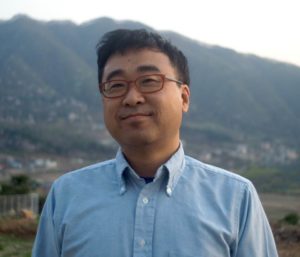 Kim, SeongHan lives in Chuncheon, South Korea, with his wife HaeYoung and two daughters. They attend Jesus Heart Mennonite Church. They were Goshen residence and attended College Mennonite Church while SeongHan was a doctoral student at Trinity Evangelical Divinity School. SeongHan is working as a regional director for Korea InterVarsity Christian Fellowship.

I am a child of war refugees, the grandson of internally displaced people. My parents were born near the Korea-China border, at the corner of the north-west Korean peninsula. After more than 35 years of colonization under Imperial Japan and our liberation in August 1945, suddenly the United States and the Soviet Union drew the line on the Korean peninsula. The 38th parallel lines became a frontline for the emerging Cold War. That was the beginning of two Koreas. My parents came to the South as young children in that era.

Before the Korean War (1950-53), there were more Christians in the North. Pyongyang (yes, the capital city of North Korea) was once called New Jerusalem in the East. Around 1907, there was a great revival on the Korean peninsula, and Pyongyang was the center of this revival movement. Christianity was flourishing in the North. However, when communists took over, many Christians in the North fled to the South. My mother’s family was one of these Christian refugees. My grandfather was an elder of the Presbyterian Church in the North, and later he became an ordained pastor of a church in the South. The Christians from the North had some painful experiences with new communist systems following Korean War.

There was a strong anti-communist sentiment in the church. During Korean War and ever since, this sentiment rapidly grew and was embedded into the Korean Church.

As with the Miracle of Han River (the rapid economic growth of South Korea), the growth of the Korean Church was remarkable. This is the context of my Korean Christianity. Although we all memorized the verse that says, “Love your enemy,” it felt like this could not possibly apply to North Korea. They are ‘red’ and ‘communist’ which is evil in this world.

A few weeks ago (just after PyeongChang 2018 Winter Olympic Games — What an amazing event!), my aged mother came to my house and stayed with us for a couple of days. One evening we watched the news together, which is usually not a wise choice. However that night something happened. The news report was about the presidential envoy from South Korea to Pyongyang, North Korea. When my mother saw the smiling face of Kim Jung-un at the conference hall, she told me, “It is hard to imagine how difficult it has been for this young man to lead the country in this tough situation.” I was stunned because I never heard such a sympathetic response to North Korean leaders from my mother. For her, the leaders of North Korea are pure evil and an absolute danger for many decades. But that evening, somehow my mother saw Kim Jung-un as a young man, as fellow human being, instead of an insane Rocketman.

I think of Psalm 23:5, “You prepare a table before me in the presence of my enemies” (NRSV). God prepares a table in the middle of conflict and crisis. Then I am curious: when God set the table, is it only for me? I don’t think so.

Maybe at God’s table, we will sit down with our enemies. At this table, finally, we will recognize in others the image of God.

Just a few months ago, we were heading toward war. The news media was circulating heavy words; ICBM, preemptive strike, nuclear test, sanctions etc. There was the serious threat of imminent war on the Korean peninsula. However, now we are waiting for the North-South Korean summit and the North Korea-United States summit. As a lover of the Psalms, I would like to invite you to pray for God’s intervention at these tables. God is on the move. May our eyes be opened so we can see more clearly.