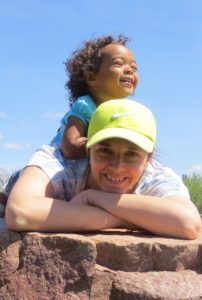 Sara Mwagura just moved back to her home state of North Dakota and is clinging to the last days of summer by taking her daughter out for lots of walks along the Red River. She works as a lead teacher at the Wellness Center Child Care at North Dakota State University.

In true toddler fashion, my two-year-old daughter stood in the woods on a gorgeous Sunday afternoon engrossed for a good 20 minutes with the dullest-looking little thing in nature — a dried up bush full of burrs. At first we worked together to stack them on top of each other and count them, but then she just wanted to make the biggest burr ball she could. So, determined to be present in the moment and not pull out my phone, bored though I was, I pondered the burrs. These passive little seeds are capable of some very active action-verbing.

They not only stick to whatever passes their way, but they stick aggressively and assertively — audaciously. They make their presence known and spread themselves quite wildly without ever making any sort of to-do list.

It was impressed upon me from a very young age that loving people was very important. When I started saying prayers before I slept at night, probably around age six or seven, I created a ritual of telling God who I loved. As I went through the list of family and friends, I would feel anxiety rising in my chest, thinking that I better not leave anyone out. So with a rushed discipline, I’d end my prayers with “And I love everyone in the world. And I love you God. And Jesus. Amen.”  Phew, that should cover it, and I could sleep peacefully knowing I’d done my loving.

But I also knew that love was more than just saying that I loved everyone. So every so often, I made

my way into the closet I shared with my sister. It was a deep walk-in closet with no light. Halfway to the back, under the hanging clothes was a very large box — the doll box. This is where we kept all the dolls and stuffed animals that we did not play with on a daily basis. I would climb into that box and pull out the ones at the very bottom, the ones who had been neglected for months, maybe years. These were the ones that had matted hair and were missing an eye or a limb. And with them I would play. Phew, duty done. No one in my room felt unloved.

I think it’s fair to say that I was earnest, though far from perfect, in my childhood quest to love. And as I entered high school and college, I wanted to take that love further — out of the doll box, into the world — to orphans in Russia, to people who went hungry, to the lonely and suffering. So when it came time to do a cross-cultural learning experience at Eastern Mennonite University, I chose to volunteer for an entire year in Beira, Mozambique with Serving and Learning Together (SALT), a program of Mennonite Central Committee. Here was a chance to really do some action-verbing.

I moved in with my host family within a week or two of arriving. And I distinctly recall the first morning I woke up there — lying in bed, on a lumpy mattress I’d just shared with one of the three teenage girls that lived there. We were complete strangers who couldn’t even communicate and were sharing a bed. The morning outside the window of the apartment building was busy — people shouting, dogs barking, water dripping constantly — dirty water that had who knows what in it. And there were people begging out there, right outside my window. And here were people sleeping right next to me, people who didn’t have what I have. Here was my chance for loving. “So now what?” I remember thinking. “What do I do now?”

And it hit me then — the meaning of those sermons on the balance between being and doing. It hit me that I didn’t have to make to-do lists of ways to love people. But rather, the Love of God in me is powerful enough to lead me in my loving.

Like the hooks on a burr, God’s love in me will act without me having it all figured out. It will act audaciously, spreading wildly, sticking to people, making a lasting impression. Love is a verb. It is active.

But I have been freed of figuring out what that means. If I open myself to God’s love, it will do the action-verbing, using me to be a friend, an ally, a healer, a feeder, a prophet, a cleaner, a listener, a priest, a preacher. I’ll still fail that love but thankfully, that’s where God’s grace starts it’s work. And I rest freely, knowing there is a power at work greater than myself.