Love is a Verb: Love is comic 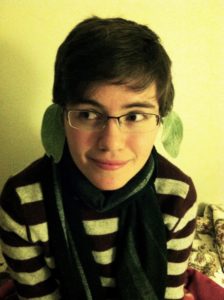 Alison Brookins is a seminarian at Anabaptist Mennonite Biblical Seminary where she will soon earn the wildly inaccurate title Master of Divinity. Hailing from Madison, Wisconsin, Alison is spending the summer in the clammy valley of Harrisonburg, Virginia, interning with Ted & Co TheaterWorks. She loves words and science fiction and community organizing and laughing often as possible.

Love is comic. It takes you deeper. It is honest. It delights. Love goes on tour and shares of itself.

I am Ted Swartz’s intern at Ted & Co. TheaterWorks. It’s a bit hard to explain what this means. Sometimes it means following him around like a duckling. Sometimes it means stabbing at a strange lighting board until I can hack out some semblance of a full stage wash. Mostly it means quaffing coffee and writing.

I’m writing a series of comic sketches about the Doctrine of Discovery. The DoD is the philosophical and legal framework that justifies invasion of land and domination of indigenous peoples, from times of overt conquest into the present day. Mennonites, as a migratory, agrarian people, are complicit in this story of displacement and domination.

I know, the topic seems about as funny as swallowing a sock full of nails. But Ted is helping me learn to share love and find truth through comedy.

Because comedy is based in love. If you don’t love something, if it doesn’t mean

“Comedy only punches up,” Ted says. “It can’t punch down. White men with power doing comic sketches about people with less power? It’s just not funny.”

Comedy about a topic that isn’t yours, that you have no stake in, that you don’t love, is just not funny. It is irresponsible, not funny, to rip something to shreds, mock it shamelessly, and walk away. Comedy should be productive; it should take us deeper in thought, conversation, belief and love. Comedy leads to truth.

My work this summer is about helping my church, the community I love, come to terms with the truth of our complicity in the displacement and domination of indigenous people.

My work is about being responsible toward the church, the object of my love, by calling it to greater self-awareness and honesty. By making fun of it.

Ted loves the truth that is found comedy. When he’s onstage and discovers something new about the truth of what he’s saying, when he makes a connection and is really heard by the audience, those are the moments, he tells me, when he believes in God with all his heart and soul.

People ask me a lot whether Ted is as hilarious in person as he is onstage. Rather than hilarious, Ted is delightful. He doesn’t have to be the funniest one in the room. Rather, he delights in the funny and invites you into it with him. Seeking out the funny is a game for everyone. When you find Ted’s funny bone and give it a good whack, he laughs with his entire being. It’s not hilarious; it’s delightful. It’s about love.

All of Ted’s work is about love. It is sharing his love of humor and faith with his church and the world.

And perhaps the greatest work of love is his latest show, Laughter is Sacred Space. This show explores Ted’s relationship with his late business partner, Lee Eshleman. Lee was, Ted says, the funniest person he had ever met, a man who “could alternately move the world with his creative genius one day, the next be unable to get out of bed and simply function as a human being.” Lee, who lived with bipolar disorder, ended his own life nine years ago.

Being Ted’s intern means witnessing his ongoing love for Lee. On any given day this summer, whether we are critiquing my writing, talking about set construction or shooting the breeze, Ted will tell me a story about Lee. “Lee had this character … Lee painted this set piece … Lee did this shtick…”

Lee contained multitudes. Ted remembers them all. There is no Lee-shaped hole in Ted’s life. There is love, love that has expanded to fill that space. This Lee-shaped love continues to expand.

This love drives Ted to take Laughter is Sacred Space on tour, raising awareness of mental illness, breaking barriers of stigma, telling the story of his own anger and grief and love.

Love delights. Love expands beyond our mortal boundaries. Love takes us deeper, calling us to honesty.

Check out the schedule for the September tour of Laughter is Sacred Space, and contribute to Ted’s project by sharing stories about your own journey with mental health.