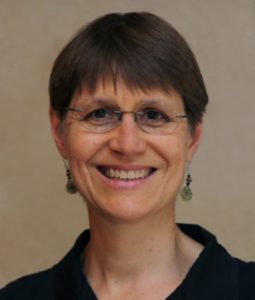 Heidi Regier Kreider has served as conference minister for Western District Conference since 2015 and enjoys the opportunity this gives her to travel from her home in North Newton, Kansas, to visit WDC congregations in other parts of Kansas, Nebraska, Texas and Oklahoma. She previously served as pastor at Emmanuel Mennonite Church, Gainesville, Florida, and at Bethel College Mennonite Church, North Newton, Kansas. Heidi and her husband David Kreider are the parents of two young adult sons.

Over these years, I have learned a lot about Christian faith, church polity, biblical interpretation and basic human nature by observing delegates debate issues such as war-tax resistance, human sexuality, financial stewardship, anti-racism and other matters of radical discipleship and witness. I have felt both humbled and empowered by serving as a delegate myself, and I’ve been energized by vigorous discussions with other conference-goers. I have been awed, educated and challenged by workshops, music, art and drama, exhibits, demonstrations and service projects that accompanied denominational gatherings. Joining in worship and song with hundreds of other people from across the wider church has often moved me to tears at a renewed sense of God’s presence and has deepened my sense of being part of something much greater than myself. There have also been painful times when our denominational gatherings were marked by division and exclusion, fear and ignorance, injustice and abuses of power, leaving many feeling wounded, disillusioned, angry or confused. Along the way, there have been defining moments such as the adoption of significant resolutions, the affirmation of a confession of faith, or the decision for a denominational merger.

Reflecting on this history and my own personal experience, I am intrigued by the cumulative effect this practice of denominational gatherings has on us as a church body. I believe that it shapes us as “a people” and equips us as God’s people.

It helps us to recognize and claim the gift of Anabaptist faith that has been entrusted to us so that we can join voices to offer this witness to the world. It allows us to meet Christ in others who are different from us and receive Christ’s hospitality from others. It gathers up our diversity and reflects that back to us as a beautiful mosaic.

Denominational gatherings are also opportunities to wrestle with tough questions: What is our calling as a United States-based church body in today’s society, cultural contexts, world, global Christian community and God’s cosmic creation? How will we practice politics and power with justice, truth, integrity and hope? What defines our relationship to other church bodies? These are adaptive challenges — questions that are not easily resolved by authority, expertise or even a one-time delegate vote. We will live into the answers only as we continue the practice of gathering together over time.

As a member of the worship planning team for MennoCon19 I invite us to ponder the words of John 20:19-22 that have been selected for worship at convention:

When it was evening on that day, the first day of the week, and the doors of the house where the disciples had met were locked for fear of the Jews, Jesus came and stood among them and said, “Peace be with you.” After he said this, he showed them his hands and his side. Then the disciples rejoiced when they saw the Lord. Jesus said to them again, “Peace be with you. As the Father has sent me, so I send you.” When he had said this, he breathed on them and said to them, “Receive the Holy Spirit.”

As we gather at MennoCon19, I hope that we — like the early disciples — can release our fears and receive the peace of Jesus and the breath of the Spirit. As we gather, may we also be sent to join God’s work in the world.

Create opportunities for others to attend MennoCon19 by visiting MC USA’s Give page and clicking Convention Scholarships.